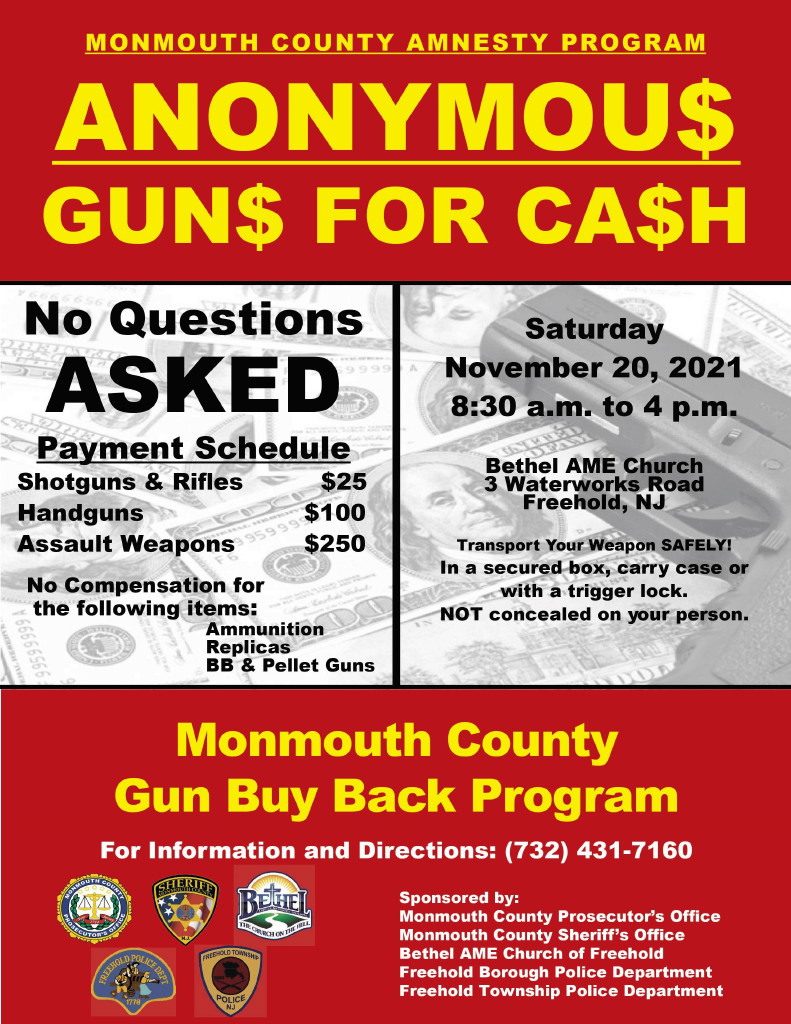 Following a successful gun buyback event that was recently held in Asbury Park, a second such event will be held on Nov. 20 in Freehold Township, Acting Monmouth County Prosecutor Lori Linskey announced.

The second gun buyback event in as many months is scheduled to take place from 8:30
a.m. to 4 p.m. Nov. 20 at the Bethel AME Church, Waterworks Road, Freehold Township, according to a press release from the Monmouth County Prosecutor’s Office.

The payment schedule for the Freehold Township gun buyback event will differ slightly from that of the event in Asbury Park; assault weapons will be collected in exchange for $250 in
cash, handguns for $100 each, and shotguns and rifles for $25 each, according to the press release.

There will be no cash compensation for ammunition, replica guns, or BB and pellet guns.

All weapons must be transported to the gun buyback event safely, unloaded, in a secured box or carry case, or with a trigger lock.

The gun buyback event will be strictly anonymous, with no questions asked of those surrendering firearms. There is no limit on the number of firearms that can be turned in by an individual, according to the press release.

Linskey’s announcement came on the heels of a New Jersey Office of the Attorney General press conference during which Acting Attorney General Andrew J. Bruck announced that nearly 3,000 firearms were turned in by residents at state and locally sponsored gun buyback events held across the state on Oct, 23 at 10 locations, including Asbury Park.

A total of 360 firearms, including 159 handguns, 133 rifles and shotguns, and three assault weapons were surrendered over eight hours in Asbury Park, according to the press release.

“We could not be prouder of our results in Monmouth County, where more firearms were collected at a single site during a gun buyback event than at any point in more than eight years,” Acting Monmouth County First Assistant Prosecutor Michael Wojciechowski said.

“Those results illustrated obvious and robust interest in the availability of such programs and we are pleased to offer yet another chance, on the other side of the county, for individuals to safely and anonymously rid themselves of unwanted firearms in exchange for cash,” Wojciechowski said.