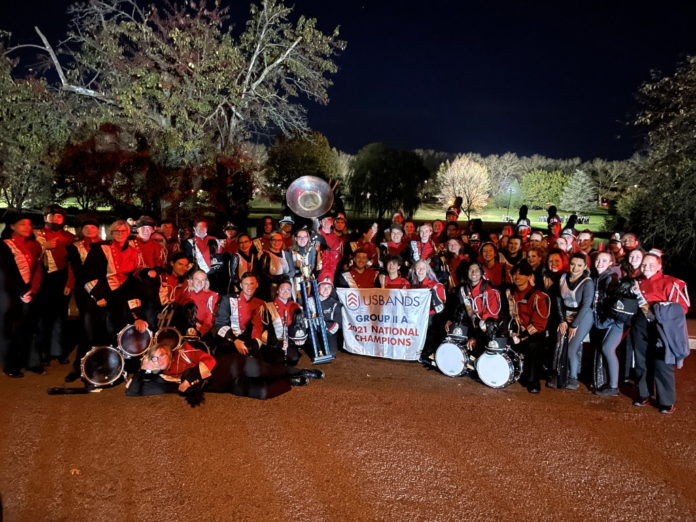 The Allentown High School Redbird Marching Band has concluded an outstanding and memorable 2021 fall season with a victory in a national championship competition.

The band had second place finishes at the Yamaha Cup in MetLife Stadium, East Rutherford, and at the New Jersey State Championships in Union Township.

“There is no harder working group of kids and coaches around,” Upper Freehold Regional School District Superintendent of Schools Mark Guterl said. “All hard work pays off and their season was an example of that. The students and coaches deserve every accolade they have received.”

According to band director Ross Hecht, the members of the marching band must run their own performances during competitions, with all coaches and directors leaving the field.

Senior drum major Michelle Sabbatini is responsible for leading the students through each performance.

“Marching band is one of the most special activities you can do in high school,” Michelle said. “It gives you family, life lessons and friendships that will last forever. This season gave us ups and downs as a band, and it could not have ended more perfectly.

“Seeing my friends and peers work the extra inch to get the smallest details, push the limit and see it all pay off was something I am so lucky to experience. I could not be more proud,” she said.

“This year, the Allentown High School Redbird Marching Band showed on a national stage what they are made of,” Principal Connie Embley said. “They are the hardest working team at our school and their hard work paid off with the recognition they deserve. The band’s show was exceptional, innovative and so enjoyable to watch.

“As principal, I could not be more proud of the band. None of this would be possible without the dedication to excellence and commitment to our students by our band director, Mr. Hecht. His leadership and musical talent make the band program what it is. I thank Mr. Hecht and his band staff for their contribution to our school,” Embley said.

“There are so many people who deserve praise for making this band season a huge success,” said Pete Alessi, president of the RBBPA. “I am honored to participate and be a part of this momentous achievement.

“I have to give a special shout-out to all the band parents who volunteered to help out this band season. Blood, sweat and tears have their rewards. So proud of all the students for their effort put into a great band season. Congratulations to all,” Alessi said.

Hecht praised the students for their work, while also thanking the staff, parents and school district for all of the support the band received.

“The students in this band are the hardest working students Allentown High School has to offer. From the long hot days of August to the cold late nights of November, this band pushed themselves to be the best.

“I am so proud of their accomplishments and I could not be happier with the results. This was a team effort and we could not have done it without the amazing students, staff, parents and school district. When all the pieces come together, amazing things happen,” Hecht said.