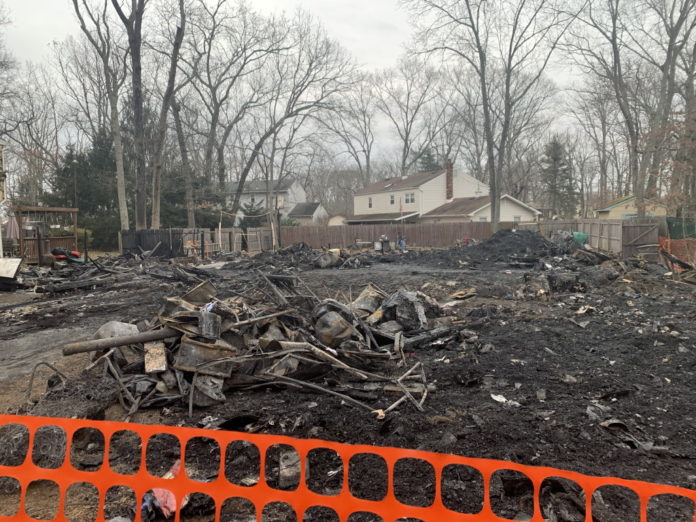 JACKSON – A fire that destroyed the Cypress Avenue home of a Jackson family has led community members to rally with assistance.

On Jan. 22 at 3:15 a.m., a fire that is believed to have started in the home’s garage incinerated the residence. Neighbors of the home that was destroyed were evacuated from their homes due to the intensity of the inferno.

The Ocean County Fire Marshal’s Office assisted the Jackson Township Bureau of Fire Prevention with an investigation into the cause of the fire.

Mike Marks, the coordinator of fire investigation for the Ocean County Fire Marshal’s Office, said officials with the Jackson Township Bureau of Fire Prevention will produce a report and make the origin and cause determination.

On Jan. 28, the cause of the fire was reported to be undetermined electrical issues, according to Stan O’Brien, the fire official from Fire District 4. No injuries were reported as a result of the fire.

The home that was destroyed belonged to Brian and Deanna Cassidy, who lived there with their daughters, Jackie and Jillian. The young women are students at Jackson Liberty High School. Jackie is a senior who plays field hockey and lacrosse, and Jillian is a freshman.

This is the second significant house fire community members have responded to in less than three months. The previous blaze was a fire at a home on Laurelton Ave days before Thanksgiving.

Following the fire at the Cassidy home, community members rallied on behalf of the family and began collecting donations of gift cards and money to assist Brian, Deanna, Jackie and Jillian.

Jackie Capasso runs the Jackson Liberty High School Parent-Teacher-Student Network and started a GoFundMe drive for the Cassidy family. She said that as of Jan. 28 the community had raised about $19,000.

A cash fundraiser produced more than $2,600 which was given to the family and the GoFundMe drive had raised about $15,800, Capasso said.

Capasso said she contacted Jackson Liberty High School Principal Geoffrey Brignola to ask if the school could assist in the fundraising efforts.

Subsequently, the senior class president and the freshman class president coordinated a bake sale that raised more than $300. The school staff will participate in a dress down “Jeans Day” to raise additional money for the Cassidy family, she said.

“I had one family donate $1,000 because when they were in high school they lost everything in a fire … they were so appreciative of everything they were able to do … their hearts really hurt for these kids; senior year is supposed to be a great time, and right after Christmas to lose everything … A lot of people who have had similar experiences were very generous toward the (Cassidy) family,” Capasso said.

The Cassidy family has posted a message on social media in which they said, “Thank you very much … we are at a loss of words … we can’t even express our gratitude for this community … it’s overwhelming … we had a roller coaster of emotions … I know we will get through this … it just brings you to a whole new level of how important people are … and when you are in panic mode during an emergency the only thing you can think of is getting the people in the house out quickly and safely … we have been here for 18 years … one day at a time.”

The Cassidy family is currently staying with relatives in Jackson.