Milltown Board of Education candidate is sworn in after tort claim resolution; becomes first Latina on board 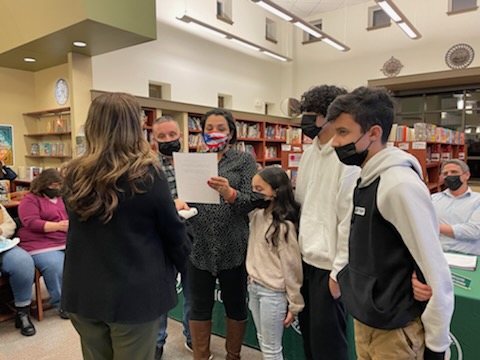 MILLTOWN – Almost two months after she was initially supposed to begin her first term on the Milltown Board of Education, Egnita Pardo finally was able to take her seat on the dais.

An administrative law judge, in a decision, found Pardo was entitled to be sworn in as a duly elected member of the board.

Pardo learned of the decision in the afternoon of Feb. 28. Later that evening Pardo, who becomes the first Latina to serve on the board, was sworn in at a board meeting at the Joyce Kilmer School Media Center.

“I look forward to serving the Milltown community that elected me to this position,” she said.

Pardo garnered 909 votes in the Nov. 2 election, winning one of the three, three-year seats available on the board. She was set to take her oath of office on Jan. 4 at the Milltown Board of Education’s (BOE) reorganization meeting.

However, a claim was at the center of whether or not it was a conflict of interest for Pardo to serve on the BOE.

In 2017, Pardo and her husband had filed a tort claim notice against the Milltown Public Schools on behalf of her minor son seeking reimbursement of medical expenses relating to an incident.

The Pardos withdrew the claim on Dec. 15, 2021, in an attempt to resolve the potential conflict.

Despite the withdrawal, the Busch Law Group, Metuchen, representing the BOE, filed a request for emergent relief with the state Department of Education stating because the claim is not of Pardo directly “a true resolution cannot be accomplished … except by Superior Court approval.”

On Jan. 28, the court heard testimony from Pardo’s son and therapist who treated him in 2017.

After the hearing, it was ultimately determined the release of the tort claim was accepted.

Before the election in November, Pardo said she is passionate about cultural competency and responsive teaching practices. One of the areas she would like to concentrate on is social-emotional learning.

“Milltown is growing and changing and we as a school community need to be cognizant of the cultural differences of our students, but also the social emotional needs that our diverse population of students are now facing,” she said.