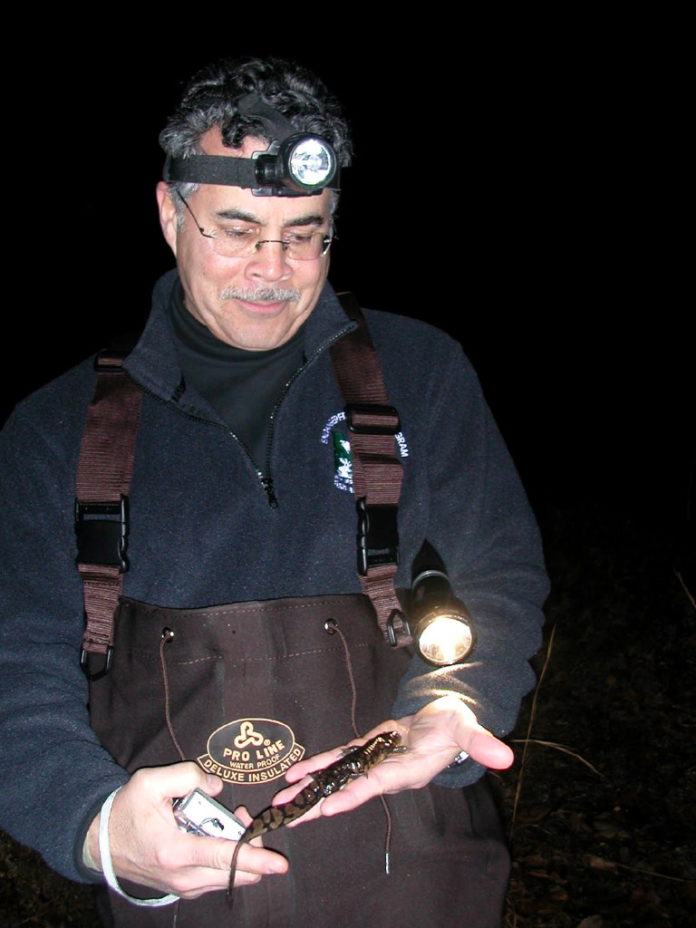 Imagine going out on a damp winter night, wearing waders and a headlamp, in search of a large, elusive salamander that spends most of its life underground.

I was lucky enough to do exactly that more than a decade ago when working at the New Jersey Department of Environmental Protection (DEP). I had been invited to accompany scientists to vernal pools to study Eastern tiger salamanders, an endangered amphibian with an early breeding season.

It was awe-inspiring to see these foot-long salamanders making their way toward the water to find a mate. One lesson that has always stayed with me is the critical importance of protecting vernal pools in this state we’re in, for the survival of tiger salamanders and many other amphibians.

You may be wondering: What exactly is a vernal pool?

These pools are usually full in the spring – thus the name vernal, meaning “of, in, or appropriate to spring.”

Most vernal pools are natural, but some can be man-made. By mid-summer, almost all will dry up.

For amphibians, the advantage to breeding in vernal pools is the lack of fish that would otherwise feast on their eggs and larvae.

“Because they are temporary, they can’t hold fish populations. A major predator is removed,” explained DEP Assistant Commissioner David Golden, a trained biologist and an expert on vernal pools.

Seven New Jersey amphibians, including some that are threatened or endangered, are “obligate” species entirely reliant on vernal pools. They include Eastern tiger, blue-spotted, marbled, Jefferson and spotted salamanders, along with wood frogs and Eastern spadefoot toads.

Another 16 New Jersey amphibians breed in vernal pools, but are more flexible and can sometimes reproduce in pools with fish.

With spring almost upon us, many amphibians are moving from their upland winter hibernation spots to vernal pools. Although the migration routes are short from the human perspective, many are hazardous because roads separate upland forests from breeding pools.

“You have species having to cross the road and it’s a gauntlet, like the video game Frogger,” said Golden.

Amphibians migrate on rainy nights when the temperature is above 45 degrees Fahrenheit. Fortunately, a corps of volunteer “crossing guards” mobilizes each spring at some of the busiest crossings to slow traffic. In other places, roads are shut down entirely.

For example, for the past 20 years East Brunswick has closed Beekman Road on spotted salamander migration nights. The township’s Environmental Commission invites families to come out and see the crossings for themselves, and the schools teach amphibian ecology.

“I will take a salamander out of the box, show it to the kids, and ask them where they think it’s from,” she said. “They say Brazil, the Amazon rainforest, Australia. I tell them, no, these are from right here in town. They are from the last remaining vernal pond in East Brunswick and we want to protect them.”

New Jersey has an estimated 3,000 to 5,000 vernal pools, on public and private property.

According to Golden, those that have been surveyed and found to have either one obligate amphibian species, or two non-obligate species, are eligible for special protections. But many vernal pools are not surveyed or protected.

Vernal pools face many challenges, including pollution, filling for development projects outside of the regulated Pinelands and Highlands regions, and damage from off-road vehicles.

Another factor is climate change, which has brought warming temperatures and new weather patterns of drought alternating with intense rainfall.

“Climate change is a big risk for amphibians, but I still think habitat loss due to development is a bigger risk,” said Golden.

He noted that while protecting vernal pools is important, it is equally important to save upland areas where amphibians winter.

Spring is a perfect time to visit a vernal pool in the deep woods and witness nature at its best. As dusk approaches on an early spring evening, listen for male frogs courting females and look for salamanders heading toward their breeding ponds.

If spring rains are dependable, vernal pools will stay wet just long enough for amphibian eggs to hatch into larvae, grow and metamorphose into adults, and finally leave the temporary pools for the dense forest.

New Jersey’s animals and plants rely on specific habitat types for their very existence.  That is why we must protect diverse landscapes to protect our state’s biodiversity.

To learn more about vernal pools, go to the New Jersey Division of Fish and Wildlife webpage at www.state.nj.us/dep/fgw/ensp/vernalpool.htm

Jay Watson is a co-executive director of the New Jersey Conservation Foundation, Far Hills. He may be reached at info@njconservation.org