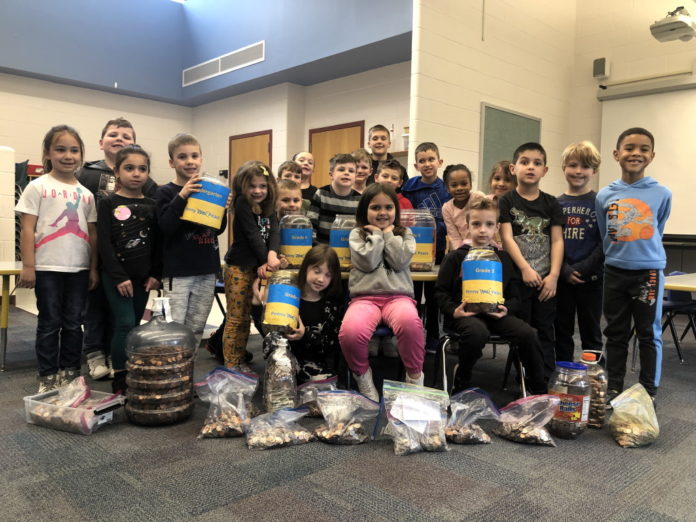 FREEHOLD TOWNSHIP – A first-grade pupil in Freehold Township who has family living in Ukraine has inspired an effort at her school to assist that nation while its military personnel defend it from an invasion by Russian armed forces.

Victoria Stefanyshyn, who attends the Marshall W. Errickson Elementary School, helped to initiate a penny collection to benefit Ukraine. The funds that were raised will assist UNICEF (United Nations Children’s Fund) as it provides assistance in Ukraine.

The fundraiser at the Errickson school began on March 7 and concluded on March 25. Supervisor of Instruction Danielle Parella estimated that between $3,000 and $4,000 was raised to provide assistance to Ukraine.

Principal Cathy Areman said, “The school is truly a microcosm of the world. We have many students who are worried about their families who are suffering due to the tragedy in Ukraine.

“There are also many students who are called to action and feel compelled to help. These students are doing what they can to help their peers.

“We want to empower our students to know they can impact the world. One penny might not seem like a lot, but when we come together, it does make a difference,” Areman said.

The penny collection began in response to the invasion’s impact on Victoria, whose family is from Ukraine and whose grandparents reside in the country.

“Since the war started, we watched the news about what was going on in Ukraine 24/7,” said Anna Stefanyshyn, Victoria’s mother. “It was always streaming live on our TV. After Victoria saw the news, she started asking questions about what is going on. So we explained it to her as good as we could do it to a 6-year-old child.”

Seeing how the invasion was impacting Victoria influenced the school’s staff members and pupils to find a way to help Ukraine.

“Victoria brought all her feelings and emotions to school, to her friends and teachers,” Stefanyshyn said. “They were really touched by her and they organized a penny collection drive to help people in Ukraine.”

Freehold Township K-8 School District Superintendent of Schools Neil Dickstein said, “I am extremely proud of the empathy and compassion the Errickson students have demonstrated through this collection effort.

“It began as a response to a student’s distress regarding her grandparents hiding in a basement in Ukraine and resulted in a sizeable donation to help children in Ukraine,” he said.

Victoria and her family have expressed gratitude for the efforts of everyone who supported the penny collection.

“I think the penny collection drive is a very kind act of support toward Ukrainian people,” Stefanyshyn said. “We can’t be more grateful for helping our people in such a difficult period of time.

“We don’t have any right to ask more than already was done for us. It’s already a lot. But we are also taking part in donations of canned food, grocery food, candy for kids, baby products like diapers, wipes and baby food, toys for kids, bulletproof vests, helmets and a lot more.

“If anyone has any opportunity to donate something like that, they will contribute in support of whole Ukraine and innocent people; elderly, women and, what is the most important, kids,” she said.