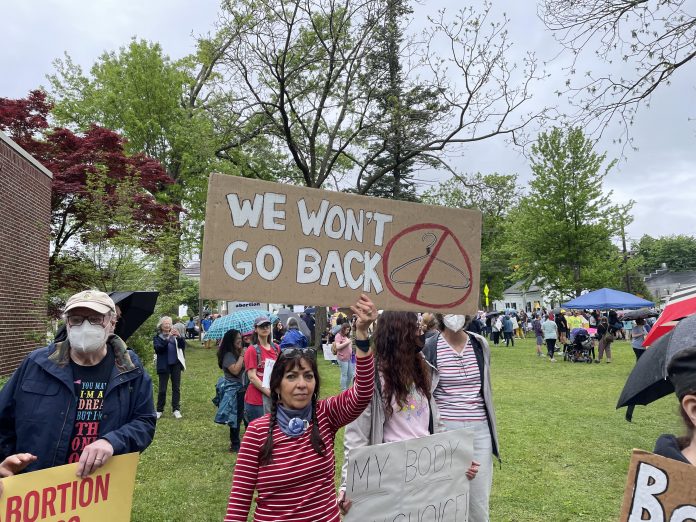 METUCHEN – The Rev. Dr. Martin Luther King Jr. Memorial Park on Middlesex Avenue has been a site where people have gathered over the years to express their First Amendment rights on a number of passionate matters.

Most recently, a large crowd gathered to let their voices be heard during “The Bans Off Our Bodies Abortion Rights Rally” calling to protect access to abortions on May 14.

The rally was organized through Speak Up NJ, a small grassroots group in Metuchen, and Indivisible Central NJ, part of the national Indivisible network. It follows many similar rallies across the country.

The rally comes in the wake of news of a leaked draft opinion suggesting the U.S. Supreme Court is poised to overturn Roe v. Wade, a 1973 decision that legalized abortion nationwide, as well as overturn Planned Parenthood v. Casey, which upheld the right to have an abortion.

Also in the coming weeks, the Supreme Court is expected to issue its ruling in Dobbs v. Jackson Women’s Health and legal experts widely expect the court to severely curtail – or even overturn altogether – the 50-year precedent that established every woman’s right to determine if they will give birth.

If that happens, 36 million people across the country will lose access to abortion, according to march organizers.

Mayor Jonathan Busch welcomed the crowd. Many in the crowd held signs “Abortion Access For All;” “My Body My Choice”; “Bans Off Our Bodies;” and “We Won’t Go Back.”

“We keep being told that men like me have to come off the sidelines,” he said, rallying other men to join him and come off the sidelines. “I know that women’s rights are not only just about our sisters, our wives, and our children. Women’s rights are human rights, and we are here to ensure that we will never stop fighting for rights preserved by Roe even if Dobbs is adopted by the U.S. Supreme Court.”

Busch’s wife, Kathy, served as emcee of the rally.

Jethwani said it’s important for people to understand that “abortion is healthcare.”

Murphy said in New Jersey, her husband’s [Phil Murphy] administration was not only hoping for the best, but had the forethought to prepare for the worst with the Reproductive Freedom Act, which ensures all New Jerseyans have the right to make their own personal health care decisions when it comes to birth control and pregnancy-related care, including abortion.

“It believes every human being has the autonomy of their own bodies and it protects all aspects,” she said.