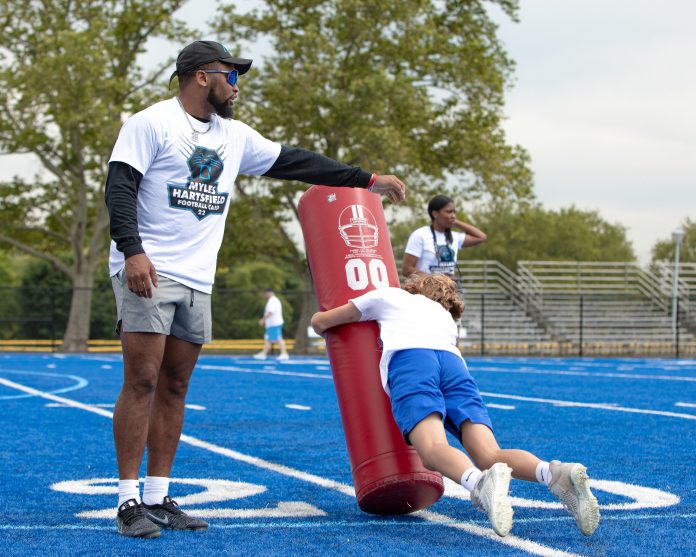 SAYREVILLE – NFL player Myles Hartsfield held a youth football camp on the same field he played as a Sayreville Junior Bomber when he was a youngster.

About 100 campers greeted Hartsfield, who said it “meant a lot to him” to be back in his hometown on the same field on June 11, according to a press release through Brookline Sports.

Hartsfield is a defensive back for the Carolina Panthers. He grew up in Sayreville. After playing four years at the University of Mississippi where he was a Freshman All-American, he entered into the 2020 NFL draft. Hartsfield went undrafted, but continued to work
and earned a spot on the Panthers 53-man roster. He has carved out a role as a starter in the NFL as a defensive back and special teams.

The youth camp was presented by the Myles’ family foundation, the Hartz Foundation, along with Brookline Sports. Music was provided by DJ 2Times and lunch was provided free by Eat Clean Bro.

At the conclusion of camp, campers had a photo session and autograph signing with the
Carolina Panthers players.

Hartsfield is looking forward to continuing in giving back to the community and gearing up for his third season.