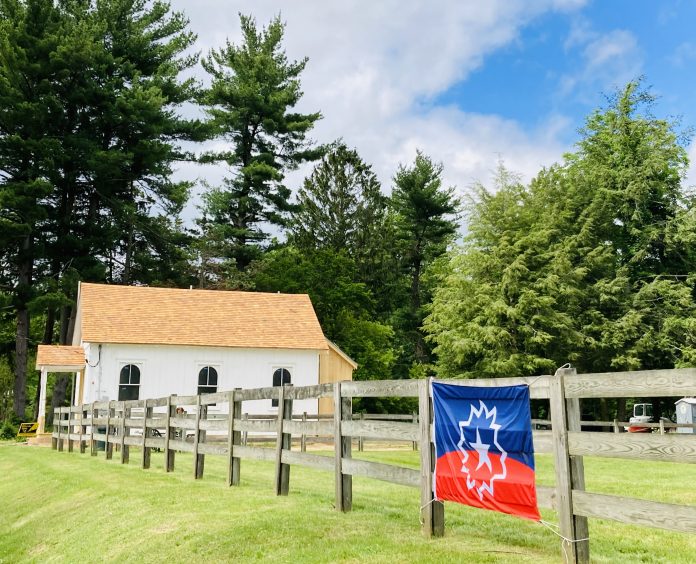 The family-friendly event, “Freedom Forward,” was held on June 18 at the Mt. Zion AME Church in Skillman, which is listed on the National Historic Register, and the adjacent True Farmstead, a historic African American-owned property recently purchased by the Stoutsburg Sourland African American (SSAAM)and the Sourland Conservancy.

Artistic workshops were held at True Farmstead. Princeton artists, activists and educators Judith Brodsky and Rhinold Ponder, presented “Black Artists: Elevating the Community,” a talk about five Black artists who lived in and around the Sourlands 50 years ago. These artists believed that art was for everyone and could elevate the quality of life for individuals in the community.

Immediately following the presentation, Emmy-winning artist and educator Dr. Ronah Harris gave the community members a chance to create art of their own. She guided visitors through the craft of quilt-making as an artistic and storytelling tradition in the African American community.

Visitors had the opportunity to make quilt squares representing their own culture, the future and social justice. The squares will be incorporated into SSAAM’s first community quilt, representing the beautiful mosaic of people in the Sourlands region.

Actors from the Allegra School of Music and Arts presented “To Be Free,” an original Juneteenth performance written by dramatist Ryan Kilpatrick. The inspirational play offers a candid view of the new American holiday and the historical events surrounding its origin story, as well as the collective responsibility for shaping a more just and equitable shared future.

Educational offerings at the event included a talk by Rutgers University undergraduate Isabella Ruiter, who recently traveled to Benin for a study abroad program. Ruiter discussed her travels as well as the history of Africans’ trans-Atlantic contributions to African American culture in the United States.

“Freedom Forward” was co-sponsored by the Princeton University Art Museum.