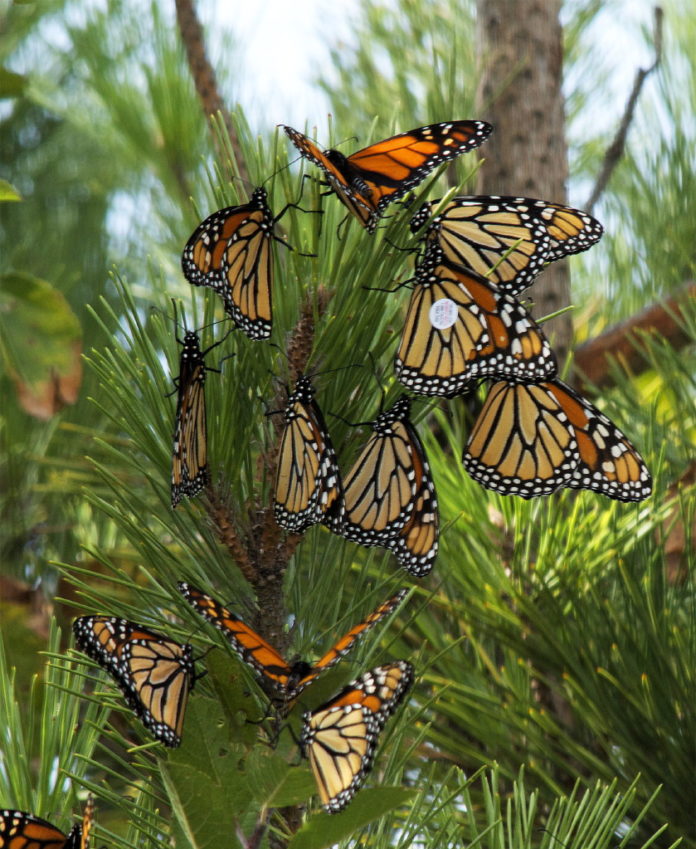 To the casual observer, the flight of monarch butterflies may seem as random as a puff of wind. In backyards and gardens, they flutter from flower to flower until the wind lifts them off again in a new direction.

But these beautiful insects, with their stunning orange and black wing patterns, never fly aimlessly. They are actually among nature’s most purposeful fliers.

Every year, the generation of monarchs that emerges in late summer and early fall undertakes one of the most amazing migrations in the animal world, traveling up to 3,000 miles, from as far north as southeastern Canada to the mountain forests of central Mexico.

It’s a hazardous journey and all the more incredible when you consider that each butterfly weighs less than a paper clip.

The long migration is only one of many challenges facing monarchs.

In July, the International Union for Conservation of Nature (IUCN) placed the monarch butterfly on its Red List of Threatened Species as “endangered,” saying habitat destruction and climate change are bringing the species closer to extinction.

According to the IUCN, the migratory monarch population throughout North America has shrunk dramatically in recent decades.

Forest habitat has been cleared to make way for agriculture and urban development, while pesticides are killing insects and milkweed, the host plant monarch butterfly caterpillars feed on. Temperature extremes, severe weather and wildfires all add to the threat.

The western monarch population winters on the northern California coast and is at greatest risk of extinction, having declined by an estimated 99.9% – from as many as 10 million to fewer than 2,000 butterflies since the 1980s.

The eastern monarch population winters in the mountains of Mexico and is much larger, but the IUCN says it declined by 84% between 1996 and 2014.

Efforts to save monarch butterflies – from planting milkweed, to conducting research, to protecting habitats – are ongoing in New Jersey and beyond, but the biggest problem is the widespread and increasing use of pesticides and herbicides on vast portions of our country’s landscape. Chemical residues are causing huge losses in hundreds of species of pollinators.

New Jersey plays a special role in the fall monarch migration along the Atlantic coast, as thousands of butterflies are funneled to the tip of the Cape May peninsula (just as migrating birds are). There, they rest and refuel as they await favorable weather conditions for crossing Delaware Bay.

The annual monarch migration provides great opportunities for researchers and the public to learn more about life cycles, population trends and migration patterns – and figure out ways to help the butterflies rebound.

MMP researchers also tag monarchs with tiny adhesive stickers that allow observers along the migration route to track their progress. Each sticker is printed with a unique alphanumeric code that tells where and when the individual butterfly was tagged. The stickers are lightweight and positioned on the underside of the wing so as not to affect flight.

According to the Monarch Watch, the national organization that oversees the tagging database, the generation of monarchs that undergoes metamorphosis and emerges from its chrysalises in late summer and early fall are biologically and behaviorally different from those emerging earlier in spring and summer.

While late spring and summer monarchs are genetically programmed to quickly breed and lay their eggs on milkweed plants, the generation that emerges in late summer and early fall does not breed. Instead, this group’s only instinct is to make the ultra-marathon journey south.

This genetic occurrence and similar timed ecological events are just mind blowing. On a late August nature walk with Dr. Emile DeVito, New Jersey Conservation Foundation’s staff biologist, he pointed out a tiny white monarch egg on the underside of a milkweed leaf and noted, “This egg is programmed to fly to Mexico.”

Migrating butterflies feed on the nectar of a variety of flowers as they move southward. Despite the long journey, they must build up enough fat stores during their two-month migration to nourish them throughout the winter. Once in Mexico, the butterflies will roost with hundreds of thousands of others.

Scientists believe some monarchs even find their way to the same tree their ancestors landed on in previous years. How do they know where to go? That’s an enduring mystery.

In the spring, this generation will finally breed, but will not live long enough to make the full journey back north. Instead, it will be their children, grandchildren and great-grandchildren that will be alive next summer.

What can you do to help monarch butterflies? You can plant milkweeds in your chemical-free flower garden; swamp milkweed and common milkweed are best and easiest to grow, and both are native to New Jersey.

If you manage a meadow, try to get surrounding landowners to reduce their dependence on pesticides. Monarchs need thousands of migratory stop-over points free of pesticide and herbicide residues. Advocate with government officials to completely ban the use of neonicotinamides nationwide.

If you spend time on or near Cape May, consider volunteering to help out with butterfly counts and tagging. You can also “Adopt a Monarch” by donating to the MMP program.

Anyone interested in learning about monarch tagging is invited to watch free MMP demonstrations in Cape May almost every day throughout September and October. A Monarch Festival at the Nature Center of Cape May is planned on Sept. 25.

For information, go to https://njaudubon.org/monarch-monitoring/