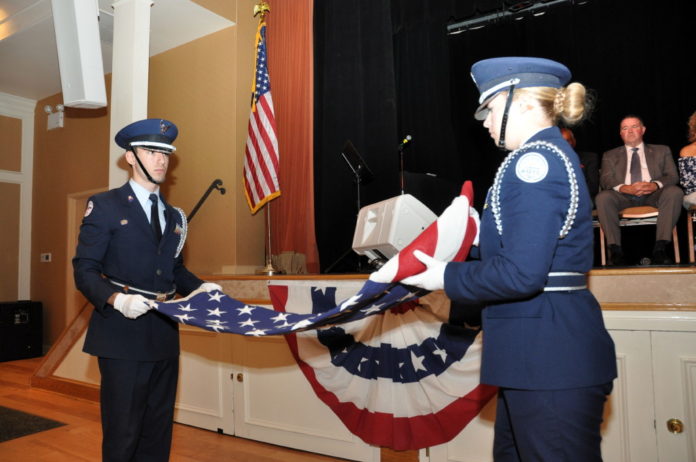 It has been 21 years since Sept. 11, 2001, that tragic day when America was attacked on its soil. It has been 20 years since that day was remembered right here in Westlake in Jackson.

Bobbie Rivere, who had chaired the program with Howard Lazan, began her remarks during our 2022 event with a reference to Howard, who was too ill to attend this year.

Ironically, we learned Howard had passed away on Sept. 11, but his spirit was with this as always. Bobbie also mentioned the late state assemblyman, Ron Dancer, who had always been with us in previous years.

The Jackson Township Air Force Junior ROTC began the ceremony with the Presentation of the Colors, followed by the Pledge of Allegiance, “The Star-Spangled Banner” and a moment of silence for all those who lost their lives.

Once again we were privileged to watch “Boatlift,” which showed how so many boats rescued those who were stranded in Manhattan when the bridges and all public transportation shut down.

Five thousand people were rescued by boat in only eight hours, more than the rescue at Dunkirk. Bobbie recited her poem “Out of the Rubble,” recalling how out of the despair came America, a theme of many of the speakers during the program.

Once again, Jackson Mayor Mike Reina chose to spend part of this day with us. Having lost his brother, the mayor is a Sept. 11 family member.

Our Master Association president, Diane O’Connor, recalled her activities on that fateful day when she was working at Fort Monmouth. She also reminded us about Sept. 10. Those who perished on Sept. 11 never thought Sept. 10 would be their last day.

Our new state assemblyman, Alex Sauickie, remembered his own experiences that day, too. He mentioned two Jackson men who perished, Joseph Magnano and Edward Oliver. Edward was the son of Westlake residents Don and Barbara Oliver.

Rabbi Emeritus Michael Klein, Congregation Ahavat Olam, spoke for the 20th time, recalling the day’s tragedy and asked that we not forget, as it is written in the Bible.

Father John Bambrick, St. Aloysius Roman Catholic Church, recalled what he was doing on Sept. 10, wishing well to a congregant who was going on a trip the next day. Father Bambrick is sure this man, a former Marine, was helping the charge on Flight 93.

The Rev. Victoria Pruner, Cornerstone Presbyterian Church, also reminded us of those who perished and how we must remain united.

This theme, that of unity, the type of unity we saw in the weeks following the tragedy, echoed throughout the afternoon.

Westlake resident Charles D’Amodio, who was a sergeant in charge of first responders during the first attack on the World Trade Center in 1993 and then volunteered to help out with retired first responders on Sept. 11, paid homage to all those first responders: police, fire, military, as well as teachers.

Bobbie Rivere then acknowledged of the Jackson School District Board of Education, Township Council, fire department, police department, and EMS. She commended all servicemen and servicewomen serving at home and around the world.

During the ceremony, Westlake’s Doreen Pisani sang three songs, including the audience favorite “Proud to Be An American,” which brought us to our feet.

The ceremony ended with a bagpiper playing “Amazing Grace,” followed by the flag-folding ceremony with narrative, conducted by the Air Force Junior ROTC, under the direction of Chief Michael Sylvester and (Ret.) Col. Jonathan W. Spare.

This moving ceremony is inspiring because we see young people who were not yet born in 2001 carrying on the proud traditions of the military and other first responders who keep us safe.

Westlake is the only local community that still holds such a moving memorial to the events of Sept. 11, 2001. We must not forget that fateful day and we must stay united as a nation as we were in the days that followed.

Ellen Keller is a resident of the Westlake adult community in Jackson. She is a features editor for the community’s magazine.