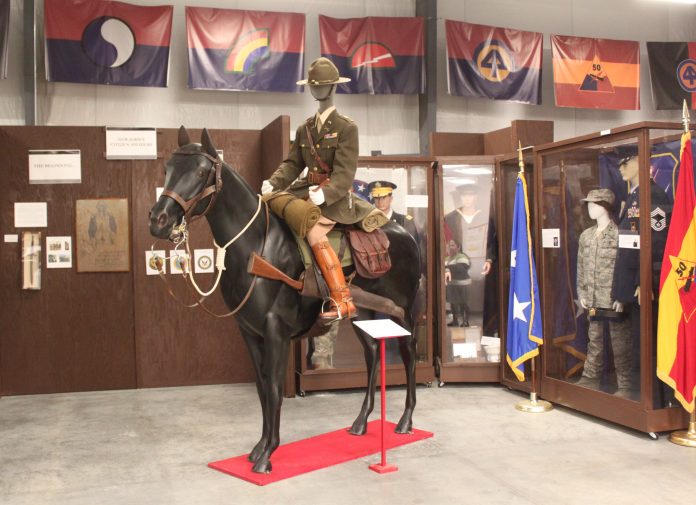 The National Guard Militia Museum of New Jersey, housed in a contemporary-looking building at the New Jersey National Guard complex at the Lawrenceville Armory is a treasure trove of the history of the state’s militia.

The museum is in a 6,000-square-foot building that opened in October 2021 at 151 Eggerts Crossing Road. It tells the story of the state’s militia and National Guard, from its earliest days under the Dutch, Swedish and British colonization in the 17th century and up to the present.

The National Guard Militia Museum of New Jersey is open weekdays from 9 a.m. to 3 p.m., and on Saturday from 10 a.m. to 3 p.m. It is closed on Sunday. Docents are available to guide visitors and answer questions. Admission is free.

The National Guard Militia Museum opened its doors in 1989 in the National Guard Armory at the front of the complex. Exhibits were spread out among several small rooms in the armory, until the museum gave up its space to the expanding 44th Infantry Brigade Combat Team of the New Jersey Army National Guard.

That’s when the New Jersey Department of Military and Veterans Affairs arranged for $1.2 million in federal funding to build the new museum on the grounds of the Lawrenceville armory property.

Outside of the museum, an assortment of vehicles and weapons – from Howitzer cannons to battle tanks and an anti-aircraft gun – is on display for visitors.

Once visitors cross the threshold into the museum, they are greeted by Bucephalus, an artillery horse, and his rider, 1st Lt. Jack Eberhardt of the 112th Field Artillery Regiment. The horse-drawn artillery unit was stationed at the armory until 1941.

A tour of the museum begins with examples of Revolutionary War-era uniforms and artifacts – a powder horn, muskets and uniform buttons. It continues through the Civil War, which includes an exhibit case of medical equipment, such as a scalpel, a bone saw and a lice comb.

Fast-forward to the 20th century, and there is a replica of an officer’s field desk, field radios from World War I and World War II, and a World War II-era stretcher and blanket. Soldiers’ field mess kits and cans of C-rations are in another exhibit case.

Exhibits of weapons used during the two world wars are on view in exhibit cases.

Nearby are display cases of WW II German pistols, rifles, a bayonet, a grenade, helmets and a Nazi flag, as well as the Japanese “Rising Sun” flag and similar weapons in the Japanese artifacts cases.

The German and Japanese artifacts were brought back to the United States by American soldiers as souvenirs and later donated to the museum, officials said. Those artifacts are in addition to Russian and Italian weapon artifacts of the same era.

But the museum is not focused exclusively on weapons.

And there is an exhibit that lists and provides details about the nearly 70 New Jersey militia members who were awarded the Medal of Honor, many of whom fought during the Civil War and later wars.