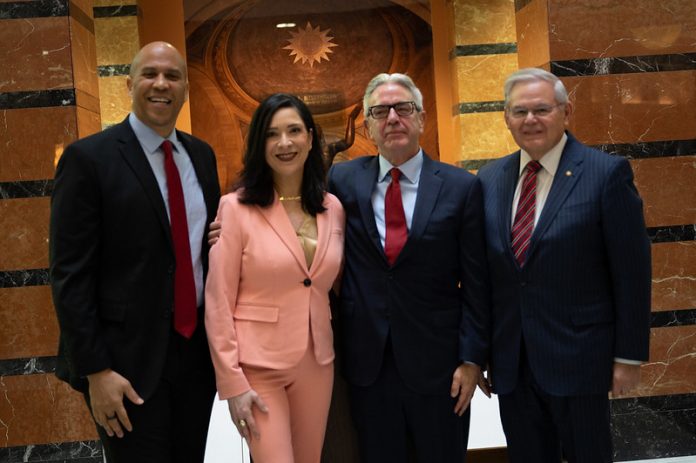 Holding her right hand to her heart, U.S. District Judge Esther Salas’ said the bipartisan effort to pass the Daniel Anderl Judicial Security and Privacy Act has given her “hope” and “faith in humanity.”

The Daniel Anderl Judicial Security and Privacy Act, which prohibits the publication of federal judges’ personal identifying information, passed the U.S. Senate by an 83-11 vote on Dec. 15 and has been sent to President Joe Biden for his signature into law.

The law is named after Salas’ son, Daniel Anderl, 20, who was shot and killed in their North Brunswick home on July 19, 2020. The shooter targeted Salas in a hate-motivated attack against her Latina identity after finding her home address online.

Salas along with her husband Mark Anderl stood with U.S. Senators Bob Menendez and Cory Booker (both D-NJ) at the federal courthouse in Newark to praise the passage of the legislation on Dec. 19.

The legislation will protect judges by prohibiting the selling, trading, transferring, or purchasing of judges’ personally identifiable information online. The law also allows federal judges to request their information be taken down if it is publicly available and authorizes the U.S. Marshals Service to hire additional analysts, security specialists, and other personnel to help prevent threats to federal judges, according to a press release through Menendez’s office.

“In the days after Judge Salas was targeted in a hateful attack that took the life of her son, Daniel, and critically injured her husband, Mark, we promised that we would do all we could to protect judges like her from future attacks,” Menendez said. “Today, we are proud to say that we delivered on our promise and secured the passage of the Daniel Anderl Judicial Security and Privacy Act. Over the past two years, we have worked with our colleagues, with other federal judges, civil liberties and privacy experts to draft a bill that would protect judges from threats to their privacy or physical security. With bipartisan support, we included the bill in must-pass legislation and it will now be sent to President Biden’s desk where it will be signed into law.”

Booker said Salas and her husband “have gone through things no one should have to endure.” He said they made a pledge to never forget that tragic day and to honor Daniel’s memory by “acting decisively to protect judges and their families.”

“With Senate passage of the bipartisan Daniel Anderl Judicial Security and Privacy Act, our democracy is stronger because federal judges can perform their solemn duty of administering equal justice under the law without fear that they or their families can be targeted using personal information that is easily accessible online,” he said.

Congresswoman Mikie Sherrill (D-11) led the effort to pass the legislation in the House of Representatives. She said she is proud that they were able to fulfill their promise to Salas and her family on the passage of the legislation.

Salas said there were many allies along the legislation’s two year and five-month journey.

“There were a number of people from both sides of the aisle that cared enough, that reached out, that were willing enough to sign and willing to help,” Salas said, noting the support from leadership staff, bar associations, Administrative Office of the U.S. Courts and judges from around the country.

Salas said since the tragic day, her family has received notes, thoughts and prayers from all around the world.

“Those prayers sustained us,” she said.

Salas said to have faith is important for her family.

“Faith to believe that the right thing will happen even when you are brought to your knees,” she said. “To have faith that good will triumph over evil. To have faith that maybe sometimes, we don’t quite understand why things happen, but we know we will come out on the other side. That’s [Daniel’s] faith. Something that we had from Day 1.”

At the end of her remarks, Salas said not only are her husband proud to be Americans, proud to call New Jersey home and are humbled to have friends in the New Jersey leaders, but they are proud to be Daniel’s parents.

Salas looked up at the ceiling fighting back tears and said, “Thank you honey, we love you.”

On the state level, Daniel’s Law was created in 2020 and amended in 2022 in an effort to enhance the state’s ability to protect members of the justice system and their immediate family members.

In July, the Daniel’s Law online portal launched through the New Jersey Department of Community Affairs and Office of Information Privacy for all current and former “covered and authorized” persons to apply to have specific personal information redacted from certain government records and internet postings.