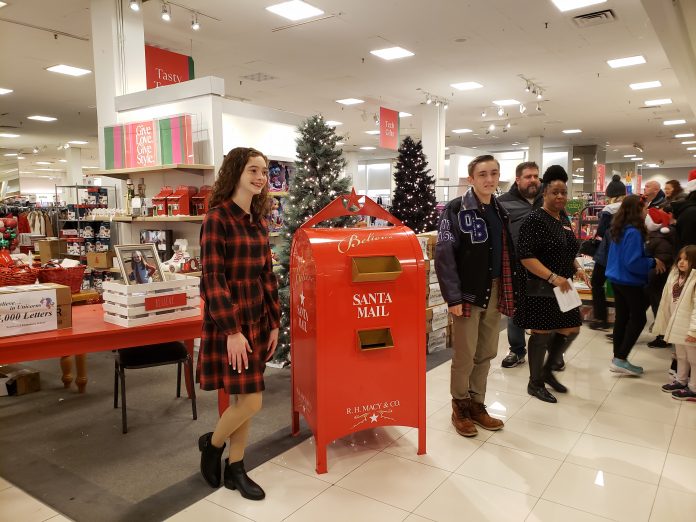 Every holiday season, Anthony “A.J.” Silvestri and Jillian Bresocnik rally their community in Old Bridge and beyond to write letters to Santa for the annual letter campaign for Make-A-Wish New Jersey through Macy’s Believe campaign.

It’s a letter writing campaign near and dear to the hearts of A.J., as a Make-A-Wish recipient, and Jillian, as a Make-A-Wish sibling. This year they outdid their two previous years since they teamed up together for the campaign.

The duo delivered a sum of 311,000 letters to the Macy’s at Brunswick Square Mall in East Brunswick on Dec. 16.

In 2021, the duo garnered 136,512 letters. In 2020 – the initial year they teamed up and called the holiday letter writing effort “Believe in Unicorns” in memory of Jillian’s sister – thousands of letters were written, collected and delivered.

In 2020, Jillian, now a sixth grader at Jonas Salk Middle School, teamed up with A.J., a student at Old Bridge High School, in memory of her 7-year-old sister, Kendall, who was diagnosed with inoperable brain cancer early in 2020. She was a student at the Southwood Elementary School.

During Kendall’s brief but fierce battle with the disease, she was granted a wish from Make-A-Wish New Jersey to build a swimming pool in her parents’ backyard. Kendall passed away in May 2020.

When Kendall was granted her wish, she asked her mother if she was going to be able to ride in the sleigh with A.J. during his annual delivery of the holiday letters.

Kendall, symbolically, rides in the sleigh in spirit. Her photo was placed on the sleigh for the ride into Macy’s.

Throughout the years and prior to Kendall’s diagnosis, Jillian and Kendall were among A.J.’s biggest supporters. The Bresocnik family, which also include parents Erik and Kerri-Ann, wrote and collected more than 15,000 letters over the past several years.

Since 2014, A.J., with the help of his supporters from the Old Bridge schools, other communities around the state and other nations, has collected more than 500,000 letters. A.J. has collected letters from as far away as Alaska, Hawaii and New Zealand.

Each year he, along with family members and friends, drops off boxes spilling over with letters during National Believe Week, at Macy’s in the Brunswick Square Mall.

This year marks a 20-year partnership when Macy’s started donating towards Make-A-Wish. When the Macy’s Believe campaign was born in 2007, those efforts grew. From the beginning of November through Christmas Eve, “believers” of all ages can mail letters to Santa at the big red letterbox at any Macy’s store or online at macys.com/believe

Because of the milestone, for every letter received, Macy’s will donate $2 to Make-A-Wish, up to $2 million, to help create life-changing wishes for children with critical illnesses.

“We are grateful to A.J. and Jillian, and of course our dear friends at Macy’s for their partnership over the years,” said Michael Dominick, assistant vice president of marketing and communications for Make-A-Wish New Jersey. “We simply cannot achieve our mission without the support and benevolence of the community. A.J. and Jillian have inspired their community once again this year, and thanks to their efforts and the financial support from our partners at Macy’s this holiday season, we will continue to restore hope into the lives of children with critical illnesses when hope is needed most.”

“We are extremely proud of the great work Macy’s and Make-A-Wish have accomplished together,” he said.

With support from the Macy’s Believe campaign, Make-A-Wish provides children who have critical illnesses the chance to experience life beyond their illness and see their most heartfelt wish come true, allowing them to replace fear with confidence, anxiety with hope, and sadness with joy.

Santa postcards to print at home and drop off at Macy’s stores are available on macys.com/makeawish.