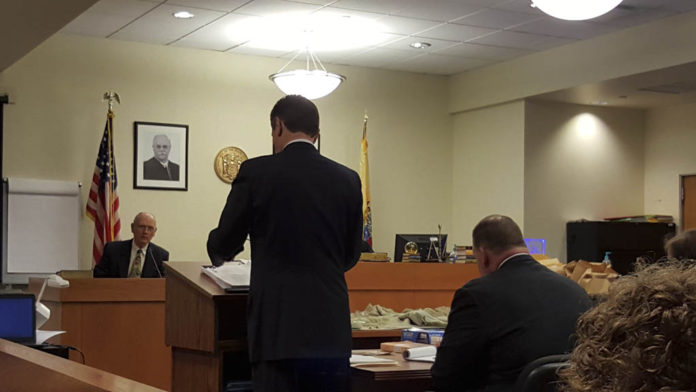 NEW BRUNSWICK — As the 25th anniversary of five-year-old Timothy “Timmy” Wiltsey’s reported disappearance from a carnival in Sayreville nears, a jury will decide if his mother, Michelle Lodzinski, played a role in his disappearance and ultimate death.

A jury panel of seven men and five women began deliberating the fate of Lodzinski on May 12.

Lodzinski, 48, is on trial on charges that she “did knowingly or willfully” murder Timmy Wiltsey in 1991.

During the closing arguments, Krovatin displayed Timmy’s framed photo that he said Lodzinski has kept by her nightstand all these years, as well as Timmy’s Teenage Mutant Ninja Turtle figurine, which, through testimony, the jury learned was passed down to his younger brothers.

He asked the jurors to deliberate the case without passion, prejudice or sympathy.

“Decide with your minds, not with emotions,” he said.

Timmy’s skeletonized remains were found in the creek off Olympic Drive in Raritan Center in Edison on April 23, 1992.

Krovatin told the jury to look at all of Lodzinski’s statements to law enforcement, especially the statements secretly recorded on June 7 and 8, 1991, with Fred Bruno, her former on-and-off boyfriend of two years.

“There are no secrets,” he said.

Through testimony, law enforcement officials investigating the case in 1991 and 1992 have said Lodzinski was their primary suspect in Timmy’s disappearance.

Krovatin told the jury to walk a mile in Lodzinski’s shoes that night.

“She lost her child, her son, her most precious possession in an instant,” he said. “One minute you’re enjoying the summer day [with Timmy] and the next minute he is gone because you messed up. … You left him with someone you barely knew.”

On June 7, 1991, Lodzinski told police about her encounter with a woman, Ellen, who she recognized from a bank she previously worked at, a little girl and two adult white males. In another version, Ellen, who was supposedly a go-go dancer, held Lodzinski at knifepoint and threatened that if she said anything, she would never see her son again.

Krovatin told the jury to consider Lodzinski’s state of mind.

“She thought she left him with someone she thought was a mother too … someone with a little girl,” he said. “It happens all the time.”

Krovatin said Lodzinski held an enormous amount of guilt, self-blame, shock and pain that got worse.

“Not only did you leave [Timmy] with someone you did not know, you were gone longer [than a few minutes] because you were flirting with the guy at the concession stand,” he said of details that emerged during testimony.

“It’s a double whammy,” Krovatin said. “You’re a failure as a mother … and, not surprisingly, denial sets in.”

Krovatin said Lodzinski was holding out hope that Ellen and the two men would bring Timmy back the next day.

However, after a week when Timmy did not reappear, Krovatin said Lodzinski decided it was time to tell officials the truth and get the police to help her find Timmy.

“What you see between May 25 and June 13 [1991] is a woman dealing with the most traumatic event in her life,” Krovatin said. “Her child was taken from her and it was at least in part her fault.”

Krovatin said this is all happening under law enforcement and media scrutiny that has gone on for 25 years.

The testimony of carnival workers Diana Courtney, James O’Connell and Mary Fulciniti, who told police in 1991 that they observed a boy matching Timmy’s description at the carnival, is key to disproving the state’s theory that Timmy was not at the carnival, Krovatin said.

He said the mishandling of the blue and white blanket where Timmy’s skeletonized remains were found in 1992 raises questions. There was no forensic evidence found on the blanket or pillowcase found with Timmy’s remains nor was there anything of evidential value found during five searches of Lodzinski’s apartment in South Amboy.

“If not for the blanket, we would not even be here today,” he said.

The blanket was found on top of an embankment from where Timmy’s remains were located by retired FBI agent Ron Butkiewicz, who investigated the case in 1991 and 1992. Through testimony, the jury learned that the blanket was not photographed before being moved.

The identification of the blanket by people who babysat Timmy led to Lodzinski’s indictment by a Middlesex County grand jury in July 2014, followed by her arrest in Florida and extradition to New Jersey.

Krovatin said the recollections of the three babysitters illustrate the limitations of memory 25 years later. He said while three people recognized the blanket, there were others who were intimately known to Lodzinski at the time who did not recognize it.

He said it is also important for the jury to look at Damien Dowdle’s testimony that Bernard Joseph McShane may have strangled Timmy while he was on the run from police in Arizona.

“There is no perfect fit [to what happened to Timmy] of what Dowdle testified,” said Krovatin.

“There are no obvious inconsistencies [to the story] … [however] there are equal consistencies,” Krovatin said.

Bevacqua began her closing statements repeating what she opened the trial with.

Bevacqua said in 1991, Timmy was becoming a burden for then-23-year-old Lodzinski. She was bouncing from job to job, she was unable to find a man willing to care for someone else’s child and she had a hard time keeping up with life as a single mother.

Bevacqua said this was evident through testimony that Timmy was late to school at St. Mary’s School in South Amboy 63 times.

“By May 25 [1991], the defendant had enough,” Bevacqua said. “It was a week from no afterschool care for Timmy and Lodzinski found a solution to begin a fresh start with no obligations and all the responsibilities that came with Timmy.”

Bevacqua said Lodzinski took Timmy out of this world and dumped her son in the marshland off Olympic Drive in Raritan Center in Edison that was intimately familiar to her.

Through testimony, the jury learned that Lodzinski had worked from September 1988 through March 1989 at Florida Fulfillment located at 375 Raritan Center Parkway — four-tenths of a mile from where Timmy’s remains were found.

“It’s a good place to dump your child when you don’t want anyone to know,” Bevacqua said. “[Lodzinski] left the child with his favorite balloon, Teenage Mutant Ninja Turtles, and she left him with things only a mother would leave their child with — his blanket.”

Bevacqua said she cannot change what happened with the investigation of the crime scene in 1992, however, she said it would have been a mistake by investigators to not have collected the blanket.

She said there is no reason for Timmy’s babysitters — Lodzinski’s niece, Jennifer Blair Dilcher,  and Danielle Gerding and Dawn Matthews — who have not seen Lodzinski in 25 years, to lie that the blanket came from Lodzinski’s home.

Bevacqua said their witness, Mark Kataryniak, engineer for Edison Township, said there was no way that Timmy’s body could have floated and been carried to his final resting place in the creek on Olympic Drive, which the defense said tidal influences — coupled with two major hurricane-strength storms between May 25, 1991, and April 23, 1992 — may have played a role in only 6 percent of Timmy’s skeleton being found.

She said despite no forensic evidence, the testimony of Donna Fontana, a forensic anthropologist for the New Jersey State Police, is significant.

Fontana had said based on her expertise, she concluded that she believes Timmy’s body decomposed in the location he was found due to the fact that 11 of his bones were found in and around the area of where the skull was found. She said another factor that she looked at for her determination was the coloration of the bones, which took on the color of the earth they were sitting in.

Bevacqua said Lodzinski’s demeanor was testified about over and over again by law enforcement officials and people involved in the search as being extremely calm the night Timmy was reported missing and the days, weeks and months after.

Lodzinski has never confessed or made any admissions to law enforcement or anyone else.

Bevacqua played snippets of Lodzinski’s initial interviews with police in the days after Timmy was reported missing and said it was telling of Lodzinski’s demeanor towards the responsibility of Timmy.

In one of the snippets, Lodzinski tells law enforcement officials that she and Timmy woke up around 8:30 a.m. on May 25, 1991.

The officer asked if that is normally what time the mother and son wake up on a Saturday.

“No, that’s when he wakes up,” Lodzinski said while laughing.

After the recording was played, Bevacqua asked the jury to think about why the defendant found this question so funny.

“What is so funny when your child has been missing for 12 hours?” she asked.

Bevacqua said the reason why Lodzinski is calm and her behavior is atypical is because she is relieved of the burden that Timmy brought to her life.

“Her behavior evidences her guilt,” she said. “The carnival was a cover-up.”

Bevacqua said no one saw Timmy alive at the carnival.

She said all the evidence points to Lodzinski as she had the opportunity of being the sole custodian of Timmy, she was the last person to see Timmy alive and Lodzinski worked four-tenths of a mile from where Timmy’s skeletonized remains were found.

As for Dowdle’s testimony, Bevacqua said Police Sgt. Scott Crocco of the Middlesex County Prosecutor’s Office investigated the matter and concluded that there was no evidence that McShane was in New Jersey in 1991.

She said Dowdle in 1991 was in prison for armed robberies and attempted to make plea deals for a lighter sentence.