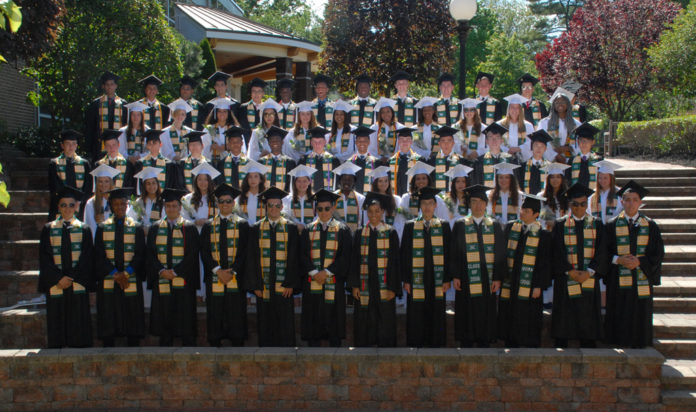 The Wardlaw-Hartridge School held its 133rd Commencement Ceremony on June 10 on the front field of the school in Edison.

Sixty-one members of the Class of 2016 marched in, led by Akash Dalal and Claude Djan, both of Scotch Plains, carrying the class flag. The program began with “The Star-Spangled Banner” and a welcome from Dr. Bob Bowman of Scotch Plains, assistant head of School for Upper School.

Three seniors represented the Class of 2016 with speeches — Charlotte Sweeney of Cranford (The Past), Claude Djan (The Present) and Makena Mugambi of Edison (The Future). Andrew Webster of Edison, head of School, delivered his charge to the Class of 2016 and Ted Osborne of Plainfield, Board of Trustees president and a 1971 alumnus of the school, provided greetings and best wishes during his remarks.

The 61 graduates received their diplomas after Susan Swenson of Plainfield, director of College Counseling, announced their names. They shook hands with Webster and Osborne and after all graduates received their diplomas, they tossed their caps in the air with jubilation. The seniors in the choir joined the alumni in the singing of the school song before the recessional.

Parents, families, friends, faculty and staff joined the graduates for a reception, courtesy of the Parents’ Association, in the All-Purpose Room following the ceremony.