Dozens of women band together to show that Blue Wives Matter 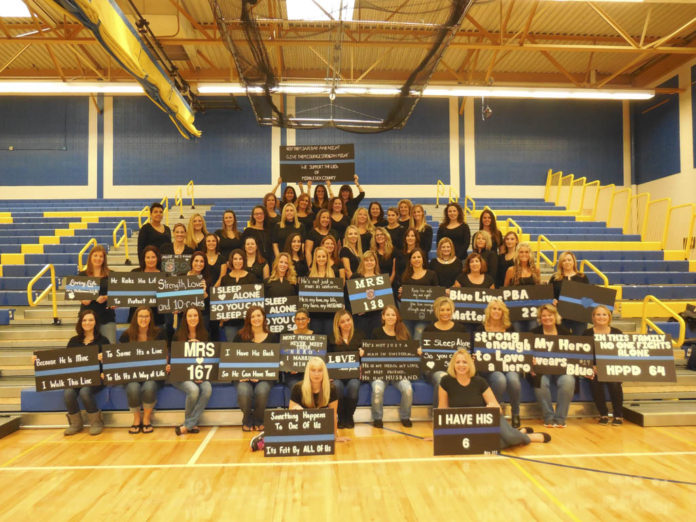 When something happens to one of us, it’s felt by all of us.

I have his back so he can have yours.

In this family, no one fights alone.

I sleep alone so you can sleep safe.

Because he’s mine, I walk the line.

Dozens of wives of police officers from Middlesex County banded together to show their support for their husbands, their fellow police wives and families throughout the country on Oct. 2.

Wendy Hanrahan, whose husband is a police officer in North Brunswick, organized an event last year with members of her department, but expanded this year to invite wives from throughout the county. More than 50 women from North Brunswick, South Brunswick, Spotswood, South Plainfield, Metuchen, Milltown, South Amboy, Highland Park, Sayreville, Old Bridge, Edison, New Brunswick, East Brunswick and the Rutgers Police Department stood proudly on the bleachers at North Brunswick Township High School, smiling and holding signs that highlighted their love and respect of their families.

Hanrahan said it is difficult for people who do not live the life to understand how difficult it is day in and day out. She said that not all cops are racist or criminals. She also said that all of the criticism in the media hurts the families, not the officers.

“In this job, people want to villainize the people who are trying to protect them,” she said. “I hope the other spouses see this and know they’re not alone. We’re all a family, supporting each other.”

“I’m proud, yet concerned because of all the public discord. We’re proud, but we are nervous.

“I trust in his ability and the brothers he works with, but it’s very concerning,” she said.

“In today’s climate with a lot of the public sentiment not big on support of law enforcement … for the people going out to do this job every day, it means a lot to come home and have love and support,” she said.

Knowing that sentiment firsthand since her husband is a retired East Brunswick officer, Polack said that the job is hard enough without having the public act resentfully.

“I think this is a way for them to show their husbands how much they care for them and appreciate what they do and how they put their lives on the line every day,” she said.