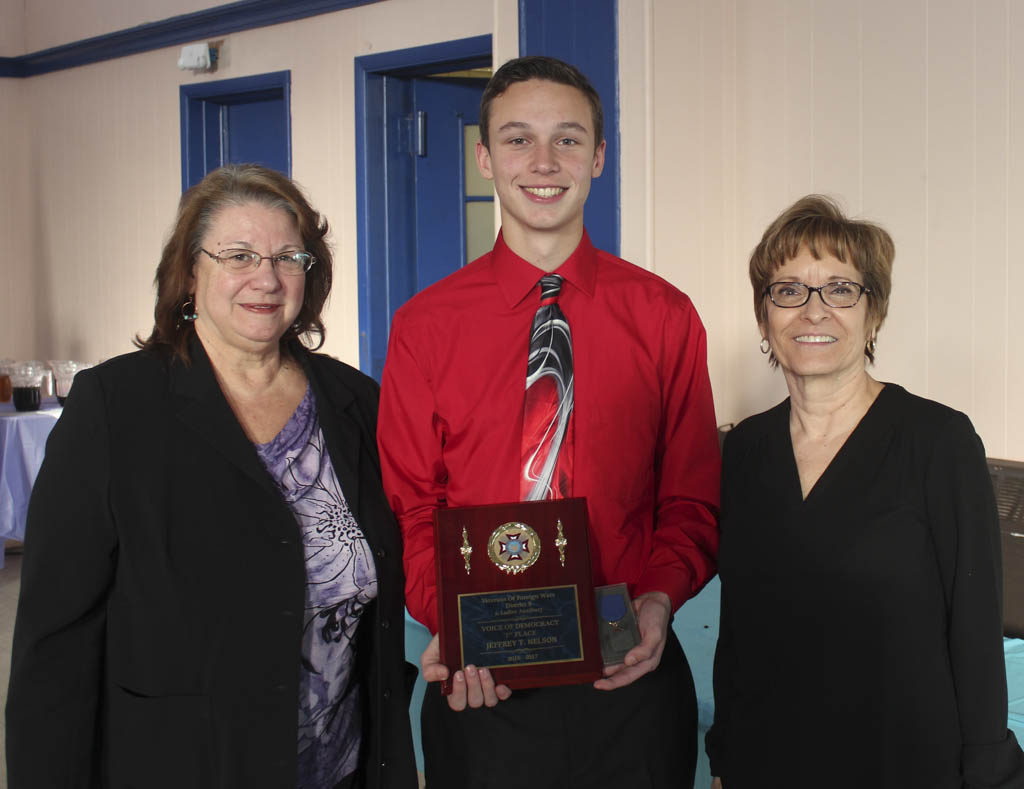 He captured this sentiment in his audio essay for the Voice of Democracy scholarship contest, which is sponsored by the Veterans of Foreign Wars and open to high school students.

Nelson’s take on patriotism earned him first place in his district.

“I was really surprised because I did not expect that at all,” said Nelson, a Sayreville resident.

Nelson has experience with the contest, as he had also participated in its middle school version, Patriot’s Pen, when he attended Our Lady of Victories School. There, the essay was required. Now Nelson pursues it on his own at his high school that is located in Holmdel.

This year’s Voice of Democracy theme was “My Responsibility to America.” He said he presented the viewpoint that Americans have an obligation beyond voting, paying taxes and serving on jury duty. Americans also have an obligation to help the poor; respect the law, the environment and one’s elders; vote; pay taxes; serve on juries; and practice common decency.

“All these core family values are taught to us on the first day of life,” he said.

However, some people fall away from them, he said. If, instead, everyone fulfilled these obligations, the country would be a better place, he explained.

“It would change a lot,” he said. “All that little stuff helps.”

He also said part of each American’s responsibility is to pass down and teach these obligations to the next generation.

His prize included a medal, a certificate and $250. He also participated in a celebratory event a few weeks ago in South River, where he read his essay.

“I’m putting [the prize money] in the bank for a car or college,” he said.

However, while Nelson enjoys political theory, he said he does not intend to make it his career. He said his passion lies in 3-D animation and visual effects, and he plans to study that in college.

Nelson’s essay went to the state and although he did not win at that level, he said he is not deterred from entering again next year.

He encourages other students to enter as well. In fact, in spite of smaller wins at the Patriot’s Pen level, he said until he won this time, “I didn’t know I could write an essay that good.”

He also said not only does the contest provide an opportunity to win scholarship money, it also helps students understand more about history and politics.

According to the VFW, 40,000 students enter the contest annually, and the respective financial prizes come from a $2.1 million fund.