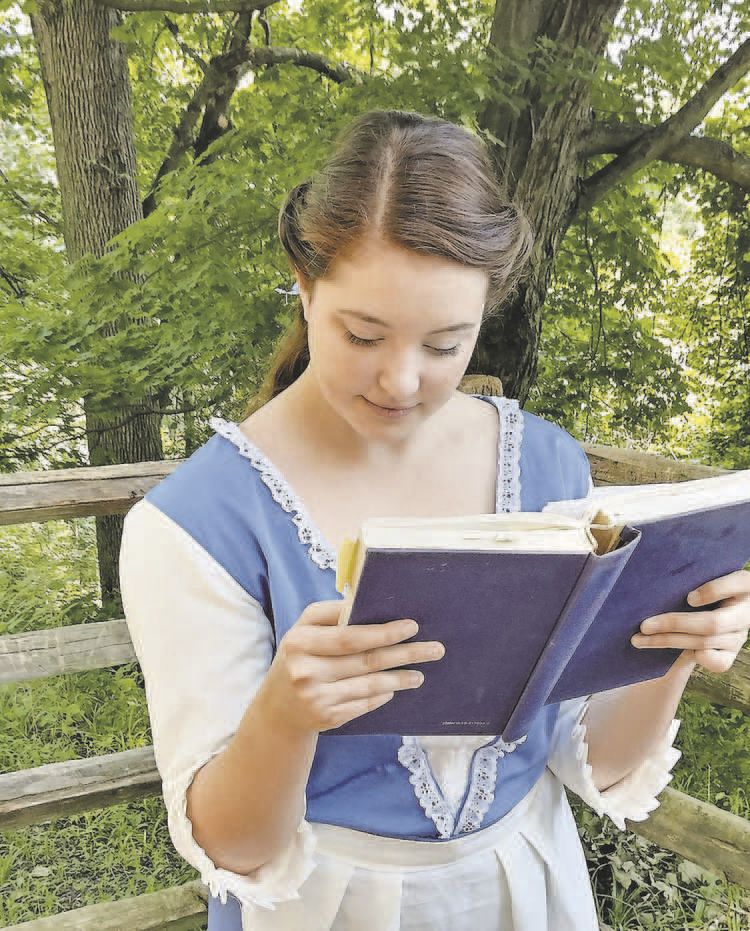 By Anthony Stoeckert, Features Editor
Everyone has their favorite Disney princess and for Jordan Virgil the choice is clear — Belle from “Beauty and the Beast.”
“That was always my favorite Disney movie and Belle was always my favorite Disney princess because she liked to read, and I love to read. I’m kind of a bookworm,” Virgil said. “I think I also look the most like her out of all the princesses, so she was always my favorite princess.”
Now Virgil, who grew up in East Windsor, is getting a chance to become Belle when she stars in the stage musical of “Beauty and the Beast,” performed by Newtown Arts Company in Newtown, Pennsylvania, Aug. 3-9.
Virgil first started acting in plays when she was in middle school, but caught the theater bug for real at Hightstown High School.
“The music director there, Cathy Anzuini, she really kind of took me under her wing and I felt like she really believed in me since I was a freshman,” Virgl said. “She really got me into theater and I did all the shows.”
Since graduating in 2014, Virgil has been attending The College of New Jersey, where she is studying education and English, but she’s stayed on the stage via community theater. Two years ago, she was in “The Addams Family” with Somerset Valley Players in Hillsborough, and last year she was in the musical “Bonnie and Clyde” at Kelsey Theatre in West Windsor.
It was during rehearsals for “Bonnie and Clyde” when a fellow cast member told Virgil that the Newtown Arts Company was planning on staging “Beauty and the Beast.”
“I had it in the back of my mind and then this summer, I saw the audition notice online, so I went and auditioned, and I got it,” Virgil said. “It’s been really great, we have a very talented cast.”
“Beauty and the Beast” ran on Broadway from 1994 to 2007. It’s based on the 1991 Disney animated movie, which is based on the French fairy tale. And this year, Disney released a live action movie version starring Emma Watson as Belle.
In the Disney version, Belle is a young woman living in a small French village, who dreams of bigger things. She loves to read and eschews the advances of Gaston (played by Tristan Takacs), the handsome, but ridiculously egocentric brute who is desired by plenty of women, but not Belle. When Belle’s father Maurice (Brent Monahan) leaves town to sell a new invention, he gets lost in the woods and ends up at the castle of the Beast (Patrick O’Leary). The Beast is actually a prince who was cursed after refusing to help a woman years ago. The woman not only turned the prince into a beast, she also turned all the castle’s servants into objects, and the curse will remain unless the beast finds true love before it’s too late.
“It’s really been like a dream come true, doing this show,” Virgil said. “I love being able to play Belle, and it’s music that everyone knows. Going into it with familiarity of the score is really helpful.”
But she doesn’t get to sing all of her favorite tunes from the show. The song “Human Again,” for example is sung by the servants, but Virgil and other cast members have found themselves off-stage singing along. “We know the song and we wish were in it,” she says.
After graduating, Virgil plans on becoming an English teacher — it all comes down to that passion for books. And while she loves theater, she doesn’t expect to make a professional career out of it.
“It’s a nice dream and people are very complimentary,” she said. “But I’m really passionate about teaching, and going into theater would be really tough because it’s a hard business. I feel like being in community theater allows me to teach, which I also love, so it’s the best of both worlds.”
“Beauty and the Beast” will be performed at the Newtown Theatre, 120 N. State St., Newtown, Pennsylvania, Aug. 3-9. Tickets cost $22-$25. For more information, go to www.newtownartscompany.com or call 215-860-7058.