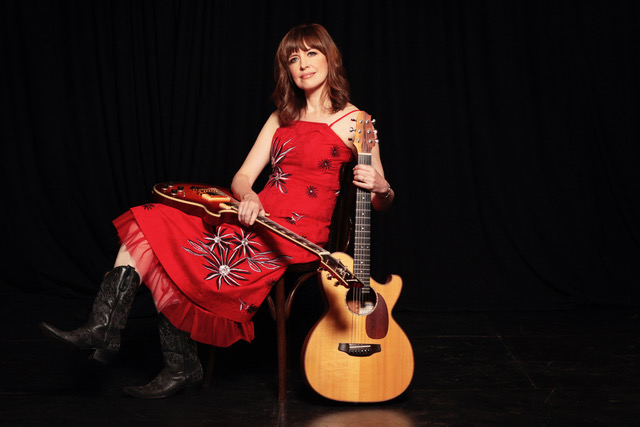 International singer-songwriter Sarah McQuaid performed at the Christ Congregation Church in Princeton on Oct. 19 in an event presented by the Princeton Folk Music Society.

After being involved with music for most of her life, McQuaid decided in 2007 she would quit her full-time job and become a full-time solo musician.

Currently, McQuaid has five solo albums, as well as one album she made under the band name Mama, which included herself and British pop star Zoë Pollock. McQuaid’s most recent album, “If We Dig Any Deeper It Could Get Dangerous,” was released this past February and was produced by musical legend Michael Chapman.

Through her years of writing, recording and performing, McQuaid’s process and approach to things has changed.

“My process has evolved over the years,” McQuaid said. “When I first started writing songs, I used to wait for a song to kind of come to me. I felt that you had to wait and be inspired, and then sit down and write your song. It was working with Zoë [Pollock], who taught me an easier way to write. You could just say, ‘Let’s go write a song,’ and you could sit down and write a song.”

Known to listeners as a folk musician, McQuaid has only recently begun to accept that as her genre, but that’s not how she really identifies herself or her music.

“I don’t really think of myself as a folk musician, that’s the genre I get lumped into,” she said. “I guess it’s because I play acoustic instruments, but I listen to all kinds of music. But when writing songs, I don’t write thinking about any type of genre, I’m just writing songs. I didn’t really choose the genre; the genre chose me. I used to argue with people and tell them that I am not a folk musician, I’m not doing traditional materials. The folk music community has been very supportive of my music; and I play at all types of different venues, from small theaters to libraries and churches, but there are a lot of folk music societies with very long histories.”

Performing for the Princeton Folk Music Society was very special to McQuaid and she looked forward to the opportunity prior to the performance.

“I am very excited to play for the Princeton Folk Music Society,” she said. “They have been going since 1965; it’s been running longer than I have, and it’s been a real honor to be invited by them and perform for them.”

Born in Madrid, Spain, McQuaid was raised in Chicago and is currently living in England after spending 13 years in Ireland. Her mother, who was really into folk music, was a big part of McQuaid’s musical life.

“I’ve been involved with music all of my life,” McQuaid said. “My mother started teaching me how to play a piano at 3 and when I was 7, I joined a children’s choir. We used to do these massive tours – not as big as my tours now – but pretty intense. We would go out for 10 days, and every day we’d have about four appearances and there was always an evening concert every day. So that got me into an early introduction of the professional side of touring.”

McQuaid has now concluded a seven-week tour, which included 37 performances, where she has been travelling from coast to coast.

“We flew into Newark airport and started heading west,” she said. “We went all the way to Los Angeles and after having two gigs in the L.A. area, we turned around and started heading east again. It has been incredibly intense. It is intensive work, it is really hard work, and it is grueling and exhausting, but I love, love, love it and I wouldn’t change it for anything else in the whole world. I am really happy, and I feel lucky to do what I do and meet all of the people that I meet.”