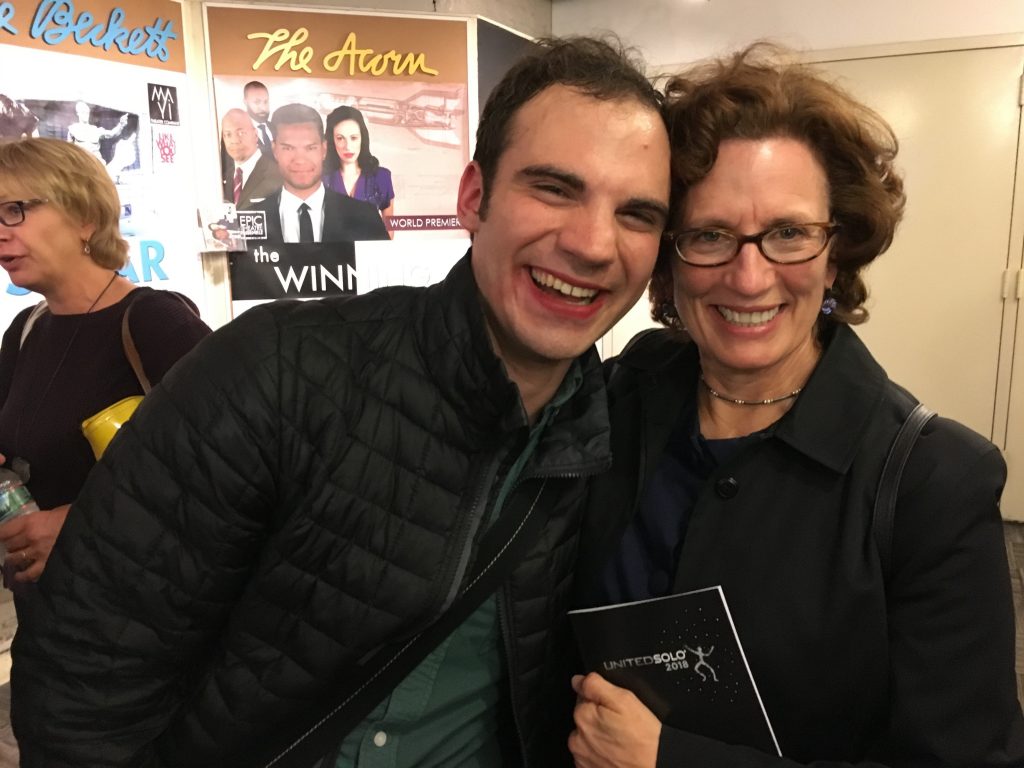 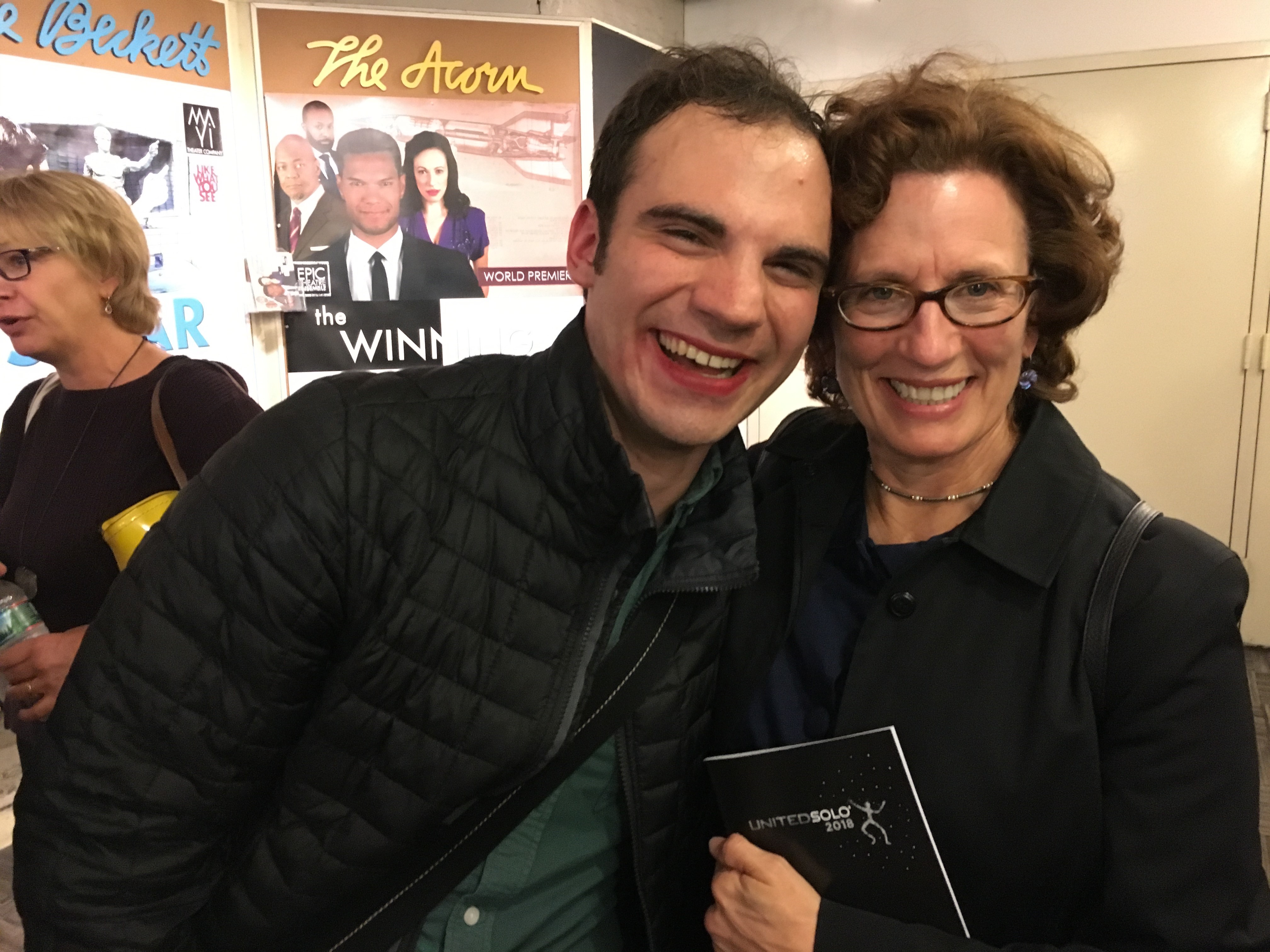 Jake Austin Robertson, Princeton University (PU) class of 2015, with a BA in Slavic Languages and Literatures, is no bully, but nevertheless always makes me cry.

The tears flow either from laughing so hard at his hilarious storytelling or being moved by his expression of a profound emotion. The first time occurred during his tribute to his “advisor for life” and my good friend, Princeton University Professor Deborah Kaple, when he accepted the Pyne Prize (the university’s highest general distinction honor conferred on an undergraduate).

He did it again when he starred as Henry Higgins in a Princeton Summer Theatre production of “Pygmalion.”

A few weeks ago, he elicited a tsunami of emotions and tears all at the same time, when I sat in the audience of his one-man show “Madman” at United Solo 2018, the world’s largest solo theatre festival, at Theatre Row on 42nd Street in New York.

Jake, whose many part-time jobs include working in Princeton as a research assistant for his “mentor for life” on a Russian archive project, pursued a master’s degree in acting from the Royal Conservatore of Scotland in Glasgow after he graduated from Princeton. His “Madman” production melds his two professional passions – acting and Russian Literature – with his own very personal story of coming to terms with his homosexuality.

I attended the performance on Sunday, Oct. 15, as part of a Princeton contingent, consisting primarily of several PU Slavic Department faculty members. We braved the slings and arrows of mass transit (the Dinky bus functioned and our train was not cancelled). Also filling the seats in the small theater were members of his family, who traveled to New York all the way from Illinois just to see the show. But our journeys were nothing compared to the journey Jake has taken – a journey so brilliantly expressed through “Madman.”

“To call Jake Austin Robertson’s ‘Madman’ a solo performance is to mislead; it’s a tour de force populated by a vibrant cast of distinct characters who seamlessly emerge, one from the other, through a single conduit who is both skilled and fearless in his delivery.

Two stories interweave: Jake, an awkward gay teenager discovering his sexuality in early-2000s America, and an unnamed heterosexual Office Clerk working for a formidable general in late-1800s Russia. Logic would dictate these two characters have nothing in common, but Mr. Robertson, inspired by Nikolai Gogol’s ‘Diary of a Madman’ and his own life experiences, masterfully culls a psychic landscape that places both men squarely on equal footing: on the fringes of the societies in which they live and longing for a love that can never be fulfilled.”

Performing a show with such a personal theme in a small theater space in front of his family was intimidating to say the least, said Jake. “When I wrote this show about my experience growing up and pulled all the skeletons fully out of the closet (pun intended), I did not think about the prospect of my family attending the performance. When they decided to come, I felt very honored and supported, but I also felt deadly nervous. The show does not hold back in its exploration of the contributions my community and family made to my trauma, however unwittingly. I was worried my family, who had flown halfway across the country to support me, would be offended by these brutally honest, yet clearly dramatized reinventions of my adolescent life.”

The irony of his “coming out” journey was Jake was raised by two moms, who in spite of their homosexuality, were trying to give Jake a “guy” heterosexual upbringing that focused on certain male social norms, such as going to the prom with a cute female classmate and watching football with his rowdy uncles who laced their football commentary with gay-disparaging language.

“My two moms were products of their time and their community…. They grew up with violence and harassment, and hoped for something better for their children. (Jake has a sister 13 years older than him). Therefore they strove for ‘normalcy.’ Even though my moms were in a same-sex relationship for years, my one mom did not come out where she worked until I was 18 years old. The real coincidence is that she came out at work on the same day that I – as a PU freshman – told my first Princeton University friend that I was gay,” he said.

“During the performance, my heart was racing at the thought of (my moms and uncles) being in the audience, but two things got me through it. First, I knew that the truth is a powerful thing and that even if the initial reaction was negative, it was still worthwhile to explore the story truthfully. And secondly, this show is not about the uncles or the mom or the grandpa or the love interest; it is about a cripplingly lonely teenage boy reckoning with himself. His story is the core and the other characters function in service of that. In the end, my family’s reaction to the piece was more thoughtful than I ever could have expected and I am grateful that they opened their hearts to it and saw the love that was at its center.”

For the 25-year-old creative genius with the mind of a Robin Williams, said one audience member, the “Madman” project took several years to evolve into a show ready for primetime.

“It was in development since I began work on my Princeton thesis nearly four years ago. In between that initial prototype of my thesis presentation, I studied in Scotland for a year, lived in New York for two, experienced the roller-coaster that is early independent adulthood, and worked through my past in an effort to create a more stable and fulfilling present. All of this led me to consider remounting that old show with a new focus on integrating what tied the story to my personal experience as a man who spent a third of his lifetime deeply afraid and ashamed of who he was.

“This seemed perfect in theory, but the playwriting challenge of making it happen was extremely daunting. I knew that somehow the surrealist story of a miserable Russian clerk who reinvents himself as the King of Spain was deeply connected to a young Midwestern outcast trying to escape himself, but exactly how seemed to elude me. There were several drafts that didn’t quite capture it, but then finally it clicked…. I saw it before me. Two things were responsible for the synthesis: the fact that both Jake and the Madman were deeply invested in an unrequited love; and the character of the King of Spain who could bring confidence and hope to them both, bridging the gap between the Russian story and my biography,” he said.

Jake hopes that “Madman” will continue to grow and develop in the coming years, but in addition to that, he has a swath of writing projects in the pipeline, including a political satire, a film project and a play about Nikolai Gogol’s final days. In addition to this, he is auditioning for shows in NYC and performing sketch comedy. To help pay the bills and keep his language skills sharp, he is teaching Russian, translating and researching Russian language documents.

Jake noted it was less gut-wrenching to perform the show for his “other family” – members of PU’s Slavic Department. “The Slavic Department is forever in my heart, and the work I did and the people I worked with still have an indelible impact on the work I do as an artist, as a teacher and as a human being. I am so grateful for their undying support and love. I look forward to many more years of using my unique perspective honed in the Slavic Department to create theater that is surprising, innovative and heartfelt. And I should say that my relationship with my Advisor-for-Life Deborah Kaple is as strong as ever and I’m currently assisting her on an exciting academic project,” he said.

The Slavic Department is determined to bring “Madman” to Princeton – to paraphrase another reviewer, everyone who has seen the play is mad about “Madman”. And the Slavic Department faculty members will be very mad if they are unable to share the brilliance of this work with both the Princeton University and town of Princeton communities.