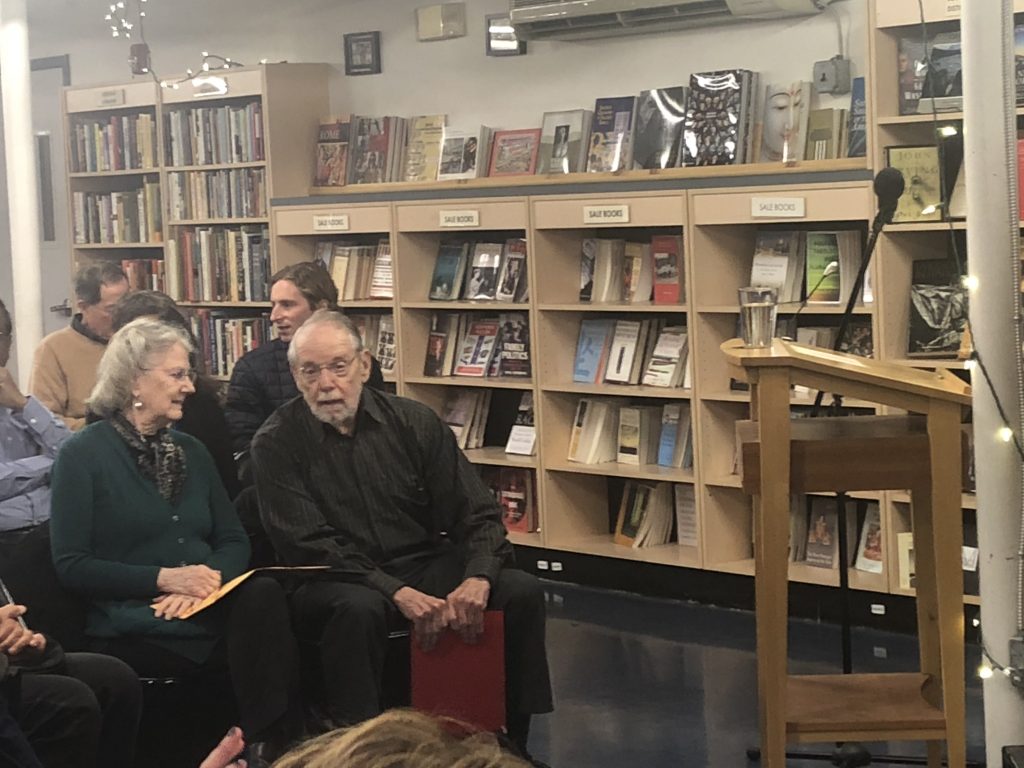 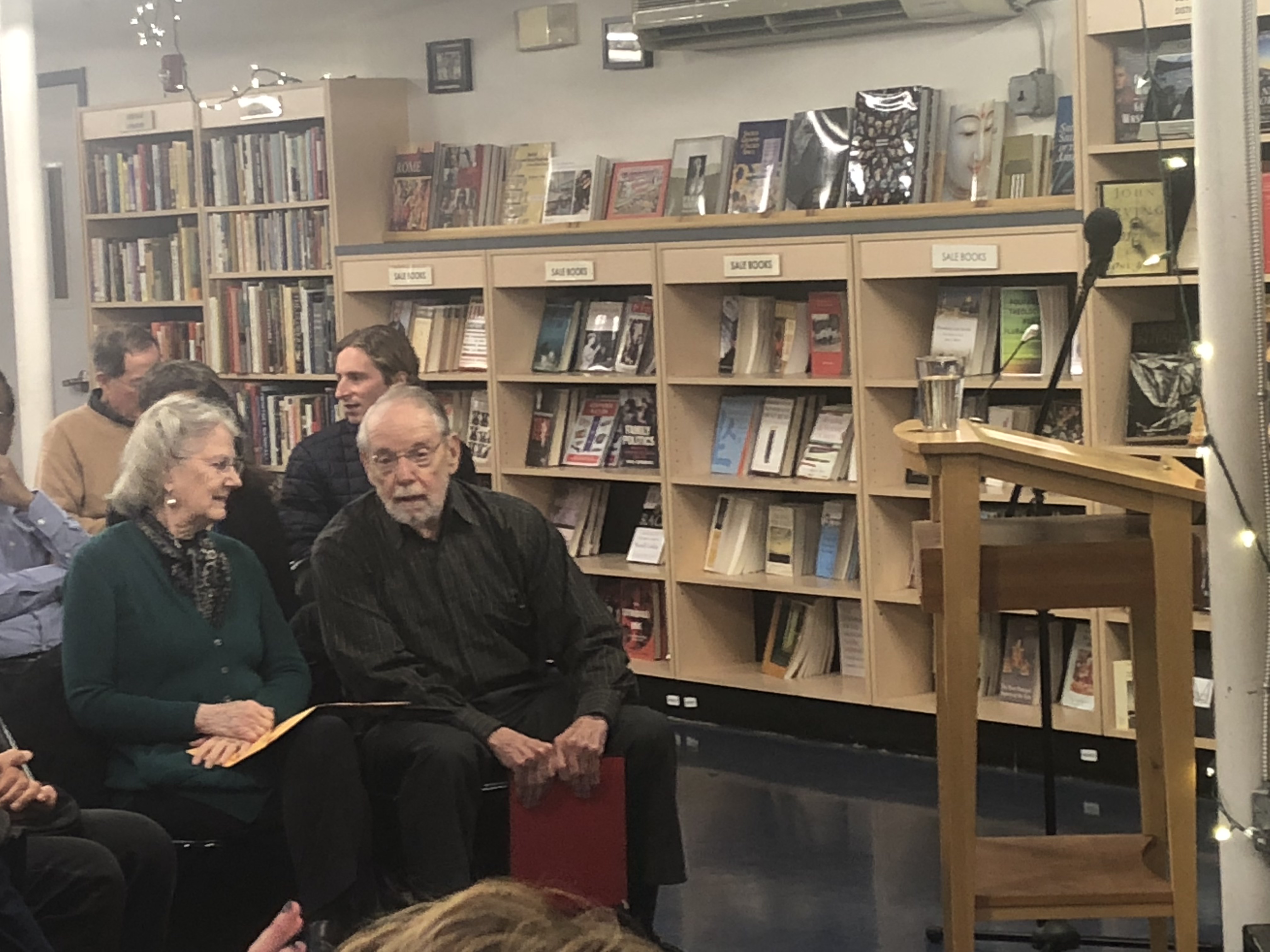 My bucket list would require very little money, just a lot of luck and chutzpah:

Since I doubt that my doctors can perform enough medical miracles to keep me around long enough for number one or that the music gods can insert a musical rhythm chip in my brain to attain number two, I am going to focus on number three.

I got taste of what it might be like to sink my teeth into a full semester of lectures by John McPhee, when I attended a Labyrinth Books Literary Salon Talk (my title) on Oct. 24.

John McPhee introduced the two featured authors: Elisabeth Cohen and Kushanava Choudhury, both Princeton University graduates but more significantly alumni of John McPhee’s writing class. They each read from their recently published books,  which are testaments to: the talents of Elisabeth and “Kush” as writers,  the talents of PU’s admission officers – and the talent of John McPhee as a teacher and inspiring mentor.

Instead of talking about his own writings – 30 books, hundreds of essays or his Pulitzer Prize, Professor McPhee in his introduction talked about one of his teaching techniques that has used every year for the past 44 years. Professor McPhee, who was born in Princeton, graduated from Princeton University (class of 1953), a teacher at Princeton since 1974, has spent a lifetime not only entertaining millions with his books and essays (he has been a staff writer at The New Yorkersince 1965), but also teaching more than 500 hundred students.

During the first seminar of his writing class, he pairs the students by last names according to the alphabet, and sends off the pairs to interview each other.  Their first writing assignment is to profile the other student in a 1,500-word essay.

“The double interview was actually the idea of one of the students, Bob Ruxin, whom I had sought out for advice, because he was the editor of the Daily Princetonian.…. In 1999, Kushanava Choudhury was paired with Elisabeth Cohen,” said Professor McPhee.

The alphabet match making has delivered some “surprising” combinations, he said, detailing the following matches made in literary heaven.

“Four former students mentioned above — Remnick, Gellman, Achenbach, and Belkin — are among seven who have returned to Princeton University as visiting professors in our program. And I don’t mind advancing the hope that Elisabeth Cohen and Kushanava “Kush” Choudhury may one day do the same,” said Professor McPhee.

I knew I was going to be impressed by the legendary introducer, but had no idea I was going to be awed by the two presenters. Elisabeth Cohen wrote a humorous, fast-paced novel about a hard-charging, angst-filled Silicon Valley executive, who also is a working mother of two children. Professor McPhee called it a 21st-century comedic digital satire – “broad, farcical, subtle, and serious.”  The seriousness for me has been underscored by the brilliant description of anxiety and stress I see in my daughter and nieces and in my younger self, who even through earning far, far fewer dollars than the novel’s protagonist, are still plagued by the same working-mother conflicts and fears and insecurities.

A trip to Calcutta, India, never has made it on my bucket list. After reading most of “The Epic City,” however, I am thinking of adding a number four to my bucket list.  According to a recent review in The Observer, “The Epic City” is a “wonderful, beautifully written and even more beautifully observed love letter to Calcutta’s greatness: to its high culture, its music and film, its festivals, its people, its cuisine, its urban rhythms and, above all, to its rooted Bengaliness. At a time when so many brilliant Indians – and perhaps particularly the hyper-educated Bengalis – are leaving India to find employment abroad, Mr. Choudhury… brought up in New Jersey (highland Park where my granddaughter , a future US president currently lives), headed in the opposite direction, to the place he thinks of as his real home.” (William Dalrymple’s  27 August 2017 review in The Observer.

I can only fantasize about my future partner in a John McPhee writing class. After all, Hemmingway might have been paired with a Hersh. But it makes me a little nervous, because Professor McPhee, in addition to requiring the essays, also suggests that “to enrich the reporting material, the paired students are instructed to show their profilees their favorite places on the campus other than a dorm room.  Daniel Xu liked scaling university buildings and walking around on roofs.  He led Kristi Yeung to the roof of Dillon Gym, and she did not flinch.  That was in 2012.  Back on earth, the relationship endured. Their current address is in Philadelphia.”

I am not cut out for walking on roofs (that would ensure my never surviving to see my granddaughter as president) but could tolerate a more grounded tour of the university’s gargoyles. 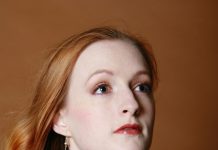 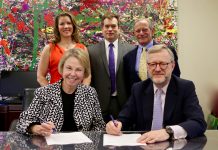