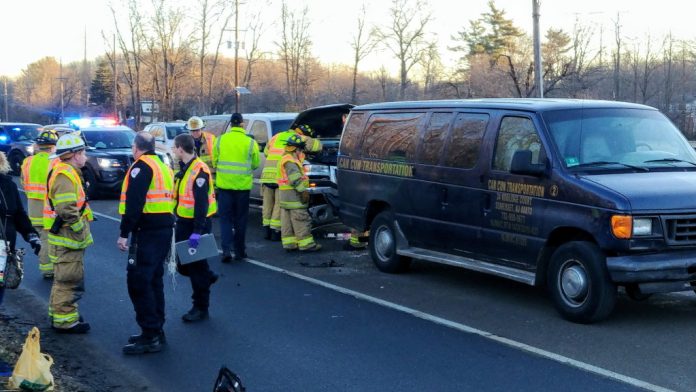 SOUTH BRUNSWICK – A multi-vehicle accident occurred in the area of Route 130 southbound just prior to Georges Road in South Brunswick around 6:44 a.m. on Feb. 6, injuring eight.

The commuter van was loaded with passengers, eight of whom reported minor injuries.

South Brunswick police responded to the scene, along with South Brunswick’s First Aid Squad, North Brunswick First Aid & Rescue Squad, Monroe First Aid Squad, and Monmouth Junction Fire Department. The large number of patients were divided between the first aid squads and transported to local hospitals for treatment of non-life threatening injuries, according to the statement.

The New Jersey Department of Transportation responded to the scene to assist with the closure of the right lane of travel as well as the shoulder.

Deans Garage removed the two vehicles needed to be towed from the scene, according to the statement.