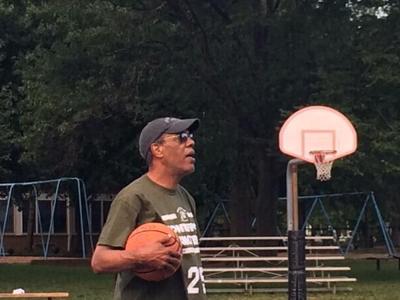 I played matchmaker this past week by introducing two institutions – both the same age and both driven by their commitment to community. It is a match – not made in heaven – but in Princeton and it’s a union that may prove to benefit many Princetonians.

Before I went into my Dolly Levi matchmaking role, neither institution knew about the existence of the other, even though both are having August events in Princeton that celebrate community and diversity.

The production of “Topdog/Underdog,” which won a Pulitzer Prize in Drama in 2002, is the first time the company is presenting a play written by an African-American woman. It also is as the first PST production to feature an entirely African-American cast. Recently named by the New York Times as “The Greatest American Play since ‘Angels in America,’” “Topdog/Underdog,” explores brotherly love and sibling rivalry by following two black brothers trying to make a living as a card hustler and a carnival performer.

Notable for local residents, however, is the role the town of Princeton plays in this particular production. The production team chose to incorporate references to Princeton’s historically African-American Witherspoon-Jackson neighborhood throughout the production design; the observant audience member, for example, will notice a sign for John Street visible in an apartment window. The playwright’s only instructions for set design were the words “here” and “now.” So PST took that advice and set the play “now” – in August 2019 – and “here” – Princeton’s Witherspoon-Jackson neighborhood.

“Though the text of the play is not Princeton-specific, the production aims to bring its exploration of race and prejudice in contemporary America home to Mercer County. In doing so, it asks audience members to critically examine the pasts, presents and futures of their own communities, as PST does the same as it enters its second half-century,” said Kirsten Traudt, PST’s communications director and PU class of 2020.

Also “here” and “now” is another production that for decades has been dedicated to the well-being of the members of the Princeton’s Witherspoon-Jackson community. The Joint Effort/Safe Streets program celebrates the history of the neighborhood and the black individuals who make their homes in this now officially historic Witherspoon district.

“Princeton has a rich history consisting of a racial history, a very positive people history, a structural history – and a history with me,” Bailey said. “All this still lures me to the place that played such an important role in defining me – and subsequently inspiring me to do this annual community celebration, which first began in 1971.”

Bailey, John Young, John Madden, Gilbert Fisher and Dennis Dugger created the Joint Effort Community Sports Program in 1971. The program was conceived as an opportunity for positive and successful black men in Princeton to give back to the community by engaging and mentoring black youth, both boys and girls, in quality youth development programs.

“Our initial focus was sports oriented, but the core value of the program was always about community and community development,” Bailey said.

In 1957, his divorced mother brought 8-year-old John and his four younger siblings from Danville, Virginia, to Princeton, specifically Leigh and Birch avenues. He lived in town until he was a teenager and “semi” left town, when his mom remarried and moved to Kendall Park. But by visiting his friends frequently, he remained a part of the Witherspoon community until 1975, when he left the area permanently.

In his heart, however, Bailey never left. He “will be forever indebted to those mentors who took me under their wing – who invested in me…. I knew my mission was to give something back – and this celebration is just that.”

The highlight will be the Witherspoon-Jackson Historical and Cultural Society dedication of four heritage plaques at the four historic black churches in Princeton on Saturday, Aug. 10. The celebrants will meet in front of Waxwood Apartments at 35 Quarry St. at 9:45 a.m., and then proceed to each of the four churches; a community reception at 30 Quarry St. will take place following the last ceremony.

My wish is each of these community institutions – both dedicated to mentoring/training and strengthening community – will find a way during their next 50 years to work together for better and never for worse.