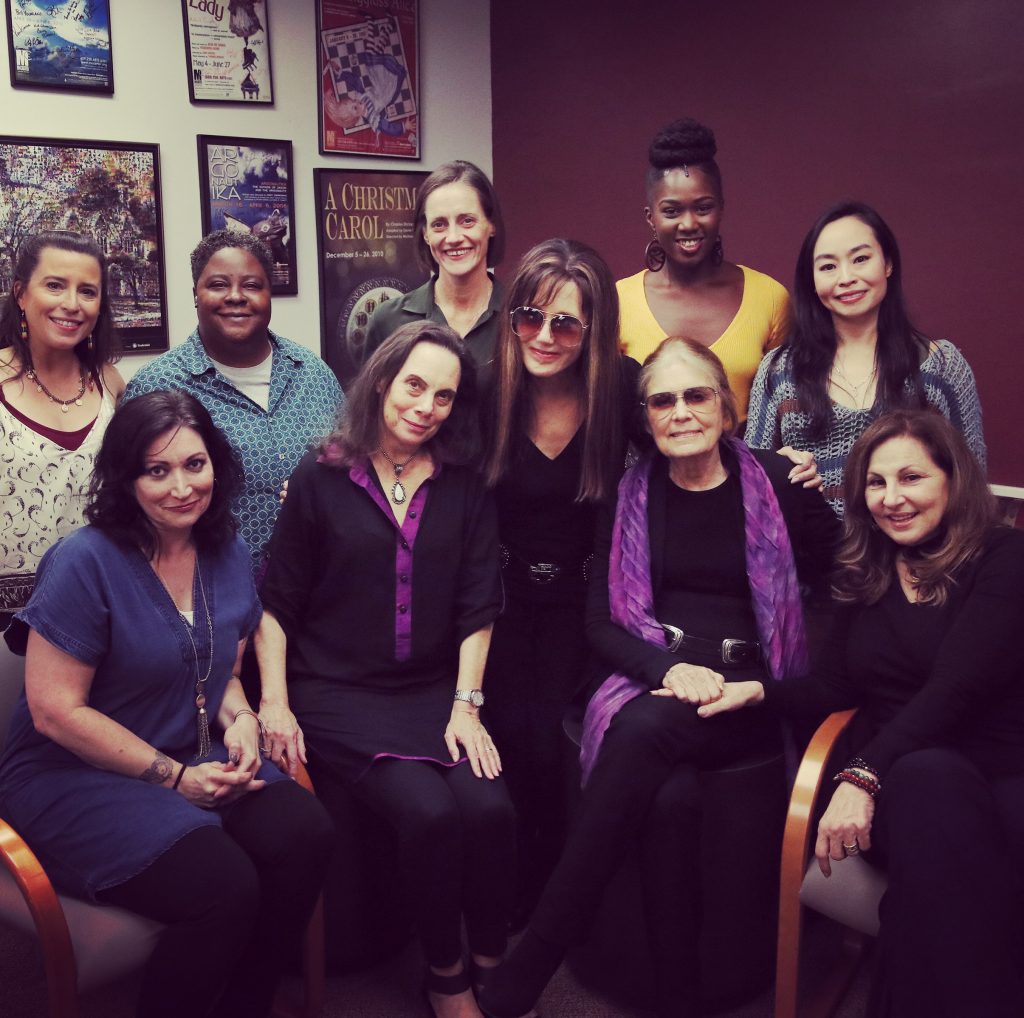 Cast photo of“Gloria: A Life” with the three women in the center- From left, Playwright Emily Mann, Lead Actress Mary McDonnell and the subject of the play, Gloria Steinem.SUBMITTED PHOTO
× 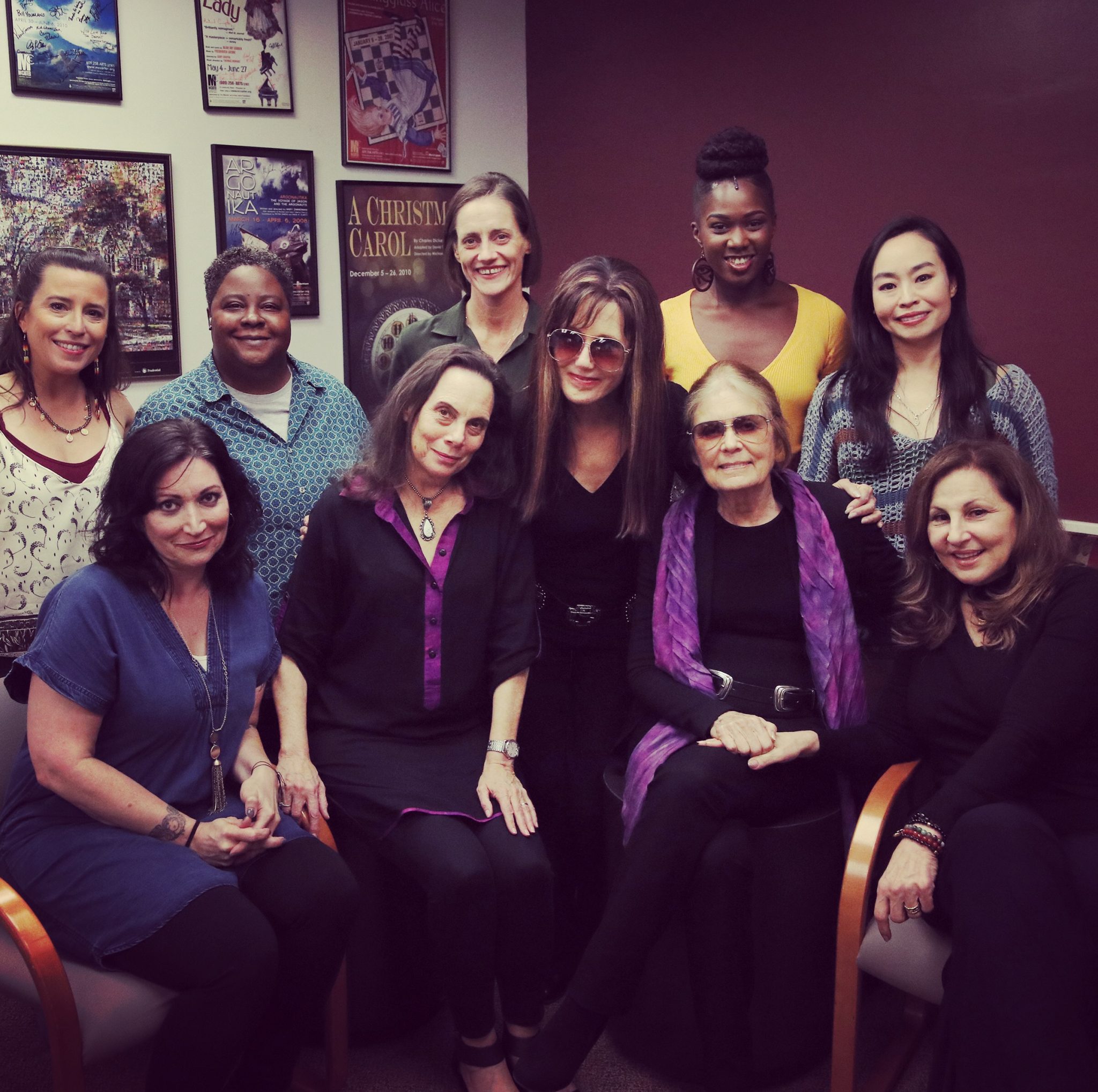 Cast photo of“Gloria: A Life” with the three women in the center- From left, Playwright Emily Mann, Lead Actress Mary McDonnell and the subject of the play, Gloria Steinem.SUBMITTED PHOTO

Our democracy was being subverted. World temperatures were rising, literally as quickly as I was melting figuratively. In addition to my angst over climate change, I was feeling unnerved by a plethora of other issues- gun violence, world peace and unresolved social justice and equality issues. Forget my future, my angst focused on my six grandchildren and their doomed futures.

By 10 p.m. that day, I felt maybe things were going to be all right. I became a hopeaholic. My conversion was due to Gloria the woman, as in Gloria Steinem, and Gloria the play, as in “Gloria: A Life,” written by McCarter Theatre’s Artistic Director and Resident Playwright Emily Mann.

Prior to the Sept. 25 production, I had seen the play “Gloria: A Life” twice – but it never clicked with me in such a profound way until the third time. Third time’s a charm? Perhaps. But in my case, the magic came not from three but from two factors: 1- the Women’s Law Project – about which I shamefully knew nothing prior to September 25; and 2- Gloria Steinem and Emily Mann themselves – sitting in front of me during the production that included Gloria Steinem, who was asked to “star” in Act II or the community conversation “Talking Circle” portion of the play.

The warm-up act for the play – whetting one’s appetite for the significance of the issues discussed in the play –was a reception and short program for the Women’s Law Project. Two local residents Joann Mitchel and Pam Goodwin with connections to both the McCarter Board and the Board of the Women’s Law Project (WLP) produced the reception. Joann, with whom I worked 15 years ago at Princeton University, invited me, probably because she knew that my credentials as a social justice feminist needed bolstering. My only activist activity was occasionally ranting in print newspaper articles and in conversations. I never marched, boycotted or burned anything to make a point. Nor have I ever written a positively brilliant and now nationally renowned play, such as “Gloria: A Life.”

“The WLP has been on the frontlines of advancing and defending the rights of girls, women and their families for almost 45 years.  It is a relatively small organization that has an impact that extends across the United States and into Canada.

“It’s path-breaking work with the Philadelphia Police Department, beginning under the late John Timoney (when he was Philadelphia’s Police Commissioner, has resulted in significantly improved police investigatory practices for sex crimes in Philadelphia. The Women’s Law Project inspired practices being implemented in Philadelphia are being reviewed by law enforcement agencies in Austin, Texas, NYC and Canada.

“Their work in the area of employment discrimination has helped to address issues with ramifications individual and broader impact, such as the provision of clean and sanitary lactation spaces for nursing mothers; their work on Title IX has helped ensure equitable access to opportunities, particularly in athletics, for girls and women; their advocacy for reproductive health has ensured that low-income women have access to resources that improve their quality of life and those of their families – these are just a few of the areas in which, in collaboration with law firms and other nonprofit partners they are helping to foster and promote social justice,” said Joann, who lives in Pennington and is Senior Vice President for Institutional Affairs and Chief Diversity Officer, at the University of Pennsylvania.

Pam Goodwin, Princeton resident, and partner in the local law firm of Saul Ewing Arnstein & Lehr and specializing in energy and environmental issues, explained how the WLP and Gloria partnering came about.

“Joann and I recently were having dinner with Emily Mann … and we were having one of those free flowing conversations – from mothers, to what comes next for Emily – who after 30 years is retiring from her position at McCarter at the end of the 2019/20 season – to the work that Joann and I are doing for the Women’s Law Project. Someone came up with the idea of hosting an event for the WPL at McCarter around ‘Gloria: A Life.’  When McCarter graciously offered to let us do this the night that Gloria Steinem was planning to attend, it felt like kismet, and I think it was.”

“Kismet” was the right term for the surreal effect the play had on my psyche. I marveled over how Emily Mann – using her living history playwriting genre – seamlessly altered the play each time I saw it to reflect changing contemporary news.

“It encapsulates the themes and ideas that I have been working with all my life and in my tenure here (at McCarter) over the past 30 years. It is a documentary play that speaks to the current moment by focusing on justice, fairness and who we are as a people. I feel it is a work that becomes more and more urgent every day,” Emily Mann stated in the play’s introductory program notes.

I watched Emily watch the play. I was amazed by her expressions of enthusiasm (clapping, laughing, moving to music, fist raising), even though she was familiar with every word, sigh, pause and grimace. Gloria seemed more physically subdued in her reactions, but so intensely riveted to the action on stage – as though it were the life of someone else being portrayed.

The genius of the play for me was the message of moving forward rather than dwelling on the past. I came away from the evening uninterested in reflecting on any particular traumatic or unjust treatment I may have experienced in my life, but rather seeing more sharply than ever before how the feminist movement by tackling women’s issues morphed into embracing far broader issues of humanity and social justice, civil rights and peace for people. Gloria Steinem’s actions and those of her colleagues have succeeded in changing things for the better and are evidence that perhaps there is a way to stop the sky from falling – and the temperatures from rising.

As was reiterated in the play by the actress Mary McDonnell playing Gloria and by Gloria herself during the discussion, Gloria is a “hopeaholic” – her professional and personal trials energizing, rather than defeating her and moving her forward, rather than making her numb in depression.

My hope is that those kids, such as my grandchildren – 60-70 years younger than Emily Mann, Gloria Steinem and Pam Hersh – get to see and be inspired by this play. Being crowd-phobic, I still will avoid those marches and demonstrations, but I will be marching into the right offices to get a video version of this play into the schools and onto social media.