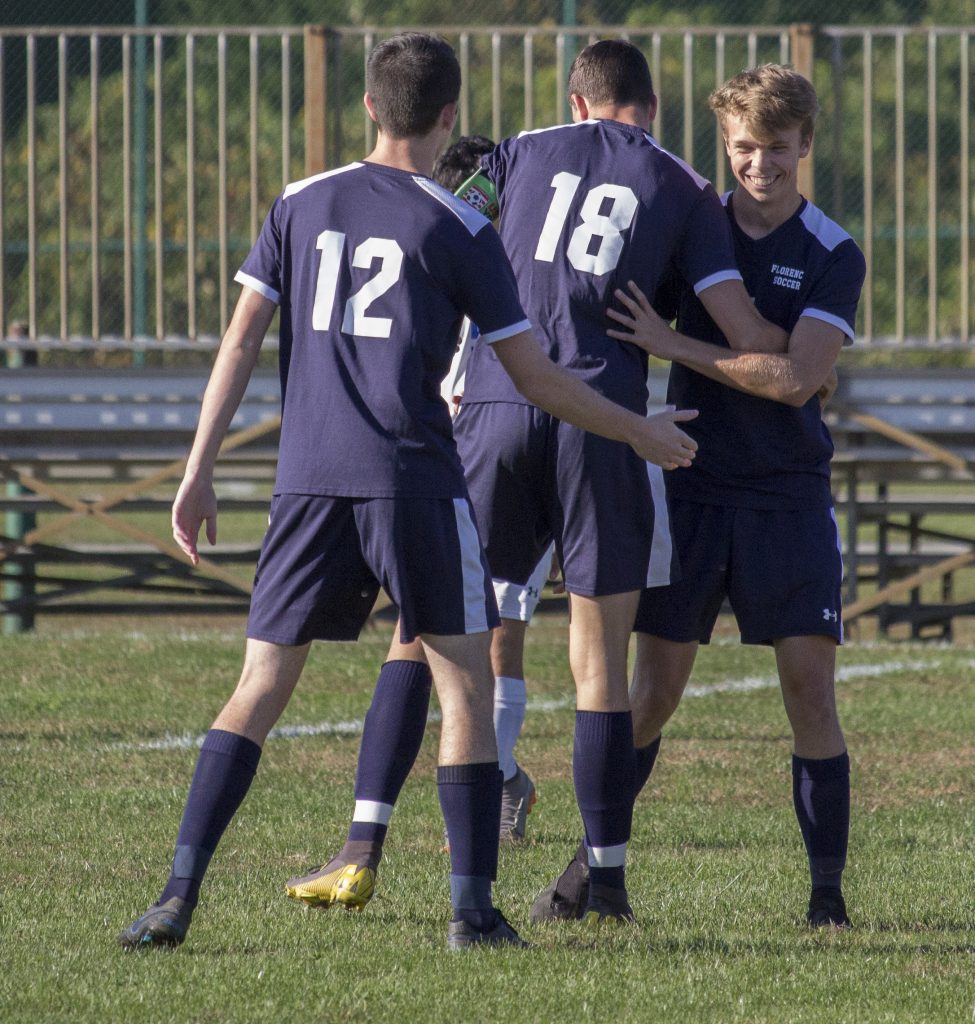 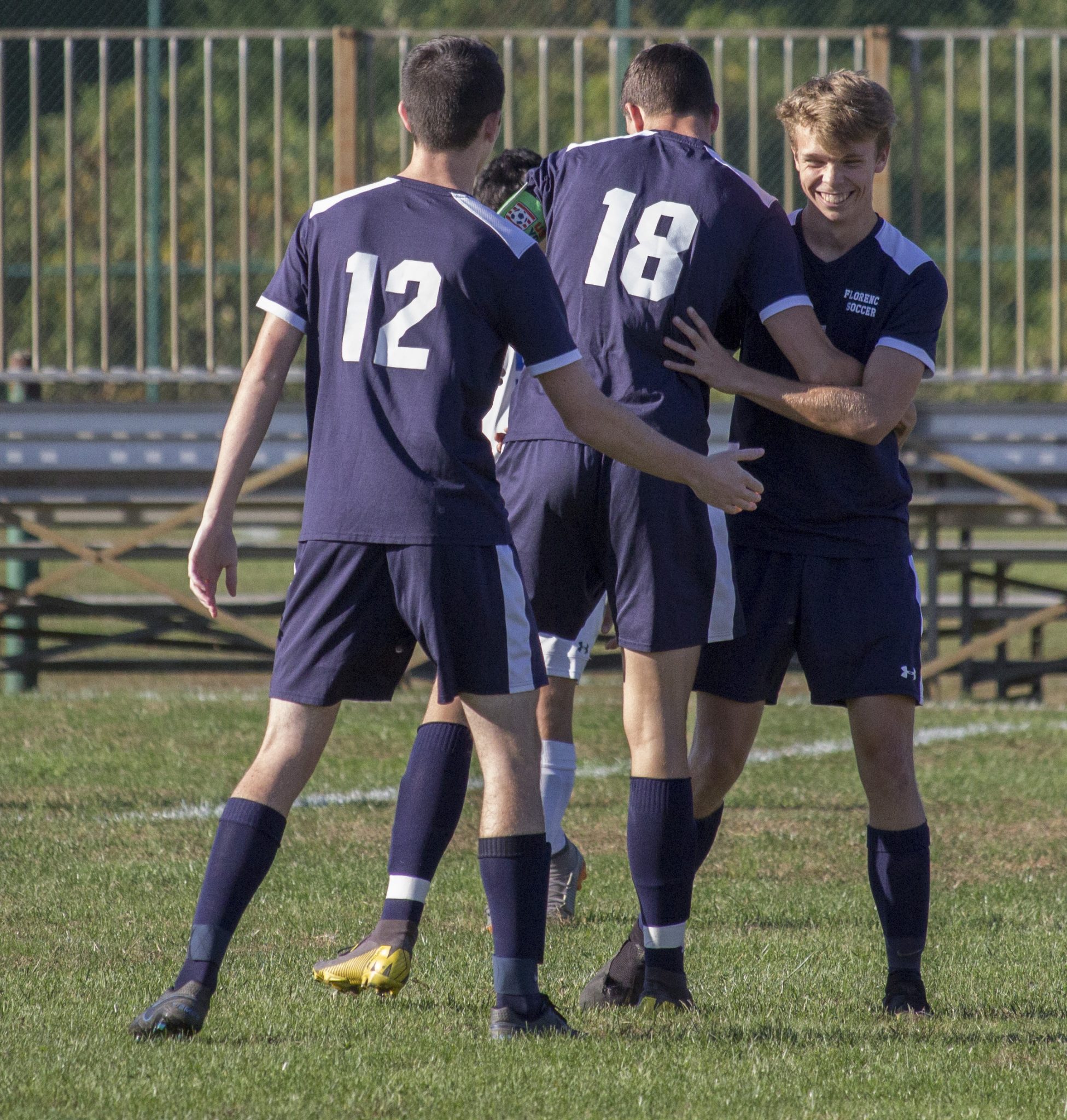 Florence gained the crown when it posted an 8-1 victory over Westampton Tech High School at home on Oct. 23.

Not only did the Flashes claim the league championship, their overall 14-5 record also earned them the first seed in the NJSIAA Central Jersey, Group 1 sectional tournament.

The Flashes were scheduled to face Asbury Park High School, the 16th seed,  at home for the Oct. 29 opening round of the sectional playoffs.

For Florence coach Kyle Ballay, the team’s regular season success was the aim from the start of the fall.

“We knew we had a strong team coming in, so we knew we definitely had the potential to put ourselves in a chance to win the division and get one of those high [sectional tournament] seeds,” Ballay said. “We played well early on in the season and caught a couple losses, but we played some really tough teams.”

Ballay noted that some of those “tough teams” included matchups against the likes of opponents, such as a 2-0 loss at home against Oakcrest High School on Oct. 9 and a 5-1 road loss against St. Augustine Preparatory School on Oct. 18.

Although the losses put a few blemishes on what was a great regular season for the Flashes, Ballay said he felt the tough competition served his team well in terms of development.

“I think we got better in playing against those teams,” Ballay said. “Playing a good team shows you different elements in your team’s game, and we are just hoping we can find that consistency to carry into states.

“The style of play has definitely improved through playing some of those better teams, which picked out some weaknesses for us that we may not have seen for the rest of the season. Our work ethic has even improved as well,” Ballay added.

Prior to the start of the playoffs, the Florence coach said that regardless of the team’s tournament results, its regular season achievements have already given both him and the players a lot to be proud of.

Ballay explained that even with a roster this year that was comprised mostly of senior players, the team still found a way to incorporate younger players into gameplay. The Florence coach said that the team’s ability to play together led to scoring opportunities up and down the lineup.

“[I’m proud] of how they stayed together,” he said. “I have thrown a lot at them from a game-to-game basis in things that we want to continue doing and things we want to work on as well, and their ability to come together as a team, unselfishly.

“We had a lot of seniors this year, so it wouldn’t have surprised people if there were selfish players on the team – guys wanting to be the ones who score all the goals, but they really together and did what they needed to as a team. If you look at the stats, all the goals and assists are spread out among the team because we have this unselfish group of guys, and everyone is willing to play their role to do what was best for the team,” he added.

While the Florence coach could point to a handful of players that helped lead the squad this year, such as midfielder Kevin Krall who notched 13 goals and four assists, or midfielder Cory Tindall, who put up six goals and seven assists, the undoubted top man for the Flashes was defender Nick Yurcho.

As one of the squad’s top seniors, Yurcho has been Florence’s back line stronghold for multiple years and leads the team’s play from the opening whistle.

“It’s about always being a leader, being there for the guys if anyone has anything wrong. I always make sure I go over to them first to make sure everything is all right,” Yurcho said.

Although the senior defender may be the go-to player when called upon, he noted that guidance has come from other upperclassmen on the team. Yurcho explained that the depth of talent and selflessness among his teammates has helped the squad become better throughout the year.

“The leadership from the upperclassmen and everyone who has been here before – we have a bunch of players on this team that play all year-round, so everyone coming together to help out some of the younger guys or someone who maybe hasn’t even played and just getting back as a unit,” he said. “That really helped us out a lot.”

Before the Flashes kicked off their sectional tournament run on Oct. 29, Yurcho explained that the team had already left a positive impression on him this season from their overall performance. When asked what he enjoyed the most about playing with this year’s squad, Yurcho summed it up with one particular quality they showed.