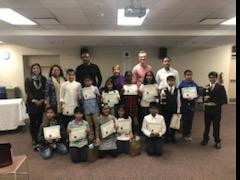 Fifth graders participate in an oration contest at the South Brunswick Public Library on Nov. 24.PHOTO COURTESY OF ROSEMARY GOHD
×

Fifth graders participate in an oration contest at the South Brunswick Public Library on Nov. 24.PHOTO COURTESY OF ROSEMARY GOHD

It appears that our future is in good hands if you listened to the fifth graders speaking at the South Brunswick Public Library Foundation’s Young Orators Competition on Nov. 24, according to publicity director Rosemary Gohd.

Dressed in their best and seated in rows facing an audience of friends and family, each of the participants waited their turn to speak for two to seven minutes in the large meeting room of the library, Gohd said in a prepared statement.

After more than two-and-a-half hours, three winners were chosen from the 17 speakers:

At registration, participants were asked to choose from three topics: Building community, the environment and social media, and then write a 150-word essay about the chosen topic.

This is the first time the Library Foundation has organized a student public speaking competition.

“Public speaking is a critical skill that is best practiced early in a student’s career,” Bina Mehta, event chair and foundation secretary, said in the statement.

Mehta said the goal of this new competition is to help the young students build skills to speak and write creatively and confidently.

“This is what libraries do. Literary support is a way for the Library Foundation to give back to the community for generations to come,” she said in the statement.

Every one of the children were able to speak with confidence, Mehta said in the statement, adding that the board members were impressed with the performance of every student in this first competition.

The SBPL Foundation’s Young Orators Competition series is presented in partnership with the CKW Academy and the Youth Leadership Development Program.