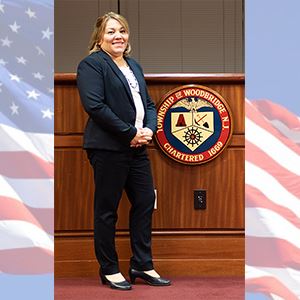 “I will continue to work for all of Woodbridge Township,” said Councilwoman-at-Large Lizbeth DeJesus after she was nominated for the position at the reorganization meeting on Jan. 1. “Along with my fellow council members, we will continue to work with the mayor and administration to ensure Woodbridge continues to be a vibrant, diverse and forward moving community.”

DeJesus said she does not serve the community for herself, but to show her two daughters and other women, that “not only women, but women of color can also have a seat at the table.”

DeJesus, who is also the first Hispanic person to serve on the council, repeated her statement in Spanish. The Hispanic population makes up 19.8 percent of the township, according to the 2010 census data.

McCormac said with his team he looks to move the township, which he proudly states is the “best town around,” forward with four more years of progress. He noted a reporter asked him what is the most important word he could think of in his role and that is “relationships.”

“Without them we fail, with them we succeed,” he said. “Woodbridge Township is stronger because of all the relationships our elected officials have with each other.”

After the swearing in ceremonies, the council approved many appointments and reappointments, including the appointment of a new business administrator, Vito Cimilluca. His annual salary is $190,000 with benefits, township officials said.

McCormac said Cimilluca started working for the township 37 years ago as a laborer, who worked his way up to senior mechanic while also working part-time with the police reserves.

“It’s a true success story that he is now the chief operating officer of a $200 million-a-year business,” he said. “Ten years ago I asked Vito to take over the operation of our ice rink at the Woodbridge Community Center … after seeing Vito for less of a year in that job we put him charge of the entire center and not long after that in charge of our entire recreation department.”

Cimilluca’s responsibilities grew to include The Club at Woodbridge, which the township purchased last year, and the Avenel Performing Arts Center when it was built.