Minnie B. Veal’s impact continues to resonate for those who grew up in Potter’s Crossing section of Edison 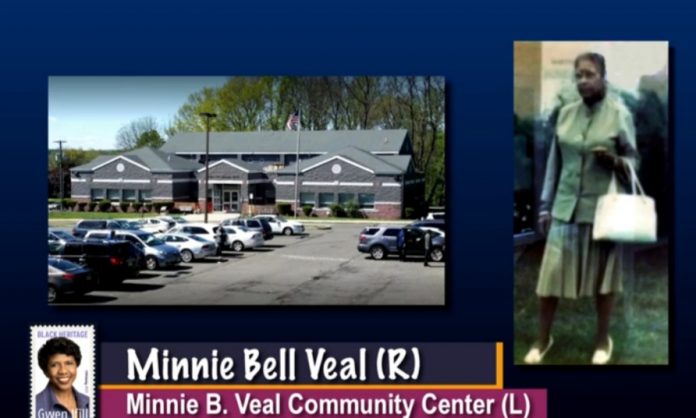 EDISON – Minnie Bell Veal’s impact continues to resonate among the children who grew up in the Potter’s Crossing section of Edison in the 1960s.

She was determined to make sure each child understood the importance of education, with the motto “failure is not an option.” She provided a place for the children to go through recreation programs and employment opportunities.

Potter’s Crossing was a self-sufficient African American community. Veal, who was born in 1907, was raised in Atlanta and migrated to New Jersey in the 1950s. Many people who migrated and settled in Potters Crossing were from Georgia, Alabama and North Carolina.

“It was a very robust community where people looked out for each other,” said Jiles Ship, who grew up in the community, during the Black Heritage Commemorative Stamp Unveiling at the Edison Public Library on Feb. 4. “It was pretty much a self-sufficient community with the creation of its own fire department, hotels and little stores.”

Ship, who became the second African American to be hired by the Edison Police Department and went on to have a successful law enforcement career, added the bustling community of places became a mecca on weekends for people in Newark and Jersey City to travel for live entertainment, socialization and restaurants.

Gregory Edwards recalled Veal as “the anchor for all of us, [always hammering] we had to do something in life.”

In the summer of 1964, Edwards was on the verge of entering his senior year of high school and began applying for colleges. He was part of the first graduating class of John P. Stevens High School in Edison. He said even though he spent three years at Edison High School before J.P. Stevens was built, he considers himself a “Hawk” for life.

After high school graduation, Edwards earned his bachelor’s degree and two master’s degrees. And after a 45-year career, Edwards is retired after serving as the longest court administrator in the state.

He was the first American American male to serve as trial court administrator in Middlesex County.

“I thank Ms. Veal – she really proved to me education was essential,” he said. “I received a scholarship from the North Edison Civic Improvement Group of $100 every year I was in school.”

He said during the summer a number of the children also worked on the playground full days from 9 a.m. to 8 p.m.

“My job was to lock up the swings at the end of the day,” he said. “It was a wonderful experience learning the value of work, responsibility and, more importantly, how to relate to people.”

Edwards said if you did something wrong in the Potter’s Crossing community, your parents heard about it before they came home, adding whatever you did wrong was corrected “before you got home and then corrected again at home.”

“It was a place where everyone knew everybody,” he said.

Reginald Johnson, branch president of the National Association for the Advancement of Colored People (NAACP) Metuchen-Edison Area Branch, awarded Edwards for his leadership in the community as he attended the stamp unveiling ceremony.

Along with Edwards, Johnson also awarded the Edison Public Library, Mayor Thomas Lankey and Joyce Ship-Freeman, who became the first African American female president of the Edison Township Council in January. She followed Veal’s work in the community.

“[Ms. Veal] made sure [the children of the community] had recreation and made sure everyone was involved in education. … She was a stickler for that,” Ship-Freeman recalled. “Each and every day you had to show her you completed some type of homework. Her whole thing about mobility and recreation came second.”

Ship-Freeman said she continued Veal’s tradition and opened up a tutorial program funded by a Community Development Block grant from Edison with volunteers from the schools for the program.

“Ms. Veal wanted people to understand education as an equalizer,” she said. “The more educated you became, you were able to rise to different levels.”

And many different levels they did. Jiles Ship said many children who grew up in Potter’s Crossing went on to successful careers including an ambassador to Tanzania and the first African American partner at Wilentz, Goldman and Spitzer law firm in Woodbridge.

Veal’s name is the name for the community center built in the early 1990s – the Minnie B. Veal Community Center on Grove Avenue. A plaque in the center bears the words she often would tell the children “Go to the top. Don’t stop.”

Veal was known for developing classes for the children who lived in Potter’s Crossing, a neighborhood that was predominantly African American spanning a two-mile radius of Grove Avenue and Inman Avenue prior to an urban renewal program in the 1970s.

Veal passed away in 1985 at age 78. She was the first black teacher in Edison. She and her husband, Frank, were friends of Dr. Martin Luther King Jr.’s parents when they lived in Atlanta, but moved to North Edison in the 1950s, according to information from the Metuchen-Edison Historical Society.

She had studied Social Work at Spelman College, and soon after moving to Edison became very involved in the community, especially the youth.

She was the recreational director at the township’s North Edison Playground and was the founder of the former Potter’s Crossing Community Center, which established itself as the headquarters for all social, recreational, civic and cultural activities in the northeast section of the township.

She was also a member of the Northeast Civic Empowerment Club and the Mt. Pleasant Baptist Church, where she served as Sunday School superintendent for 23 years. She was also vice president of the church’s Willing Worker’s Club and Flower Guild. She served as a hostess and assistant teacher of the Good News Club, a weekly Bible ministry for children, and was a member of the Metuchen-Edison Race Relations Council.

The Edison Public Library is focusing on offering more programs to showcase the diversity of the fifth largest township in the state.

Gabriel Ramos, community engagement librarian for the Edison Public Library system, said they are focusing on three different aspects: first, improving the library collection with more audio visual materials and hand print materials that will target more for a wider array audience in the community; second and third, more outreach in the community and providing more programs like the recent Black Heritage Commemorative Stamp Unveiling, which kicked off a number of events for Black History Month.

The Edison Library’s Stamping Thru History Stamp Exhibit will run through Feb 29.