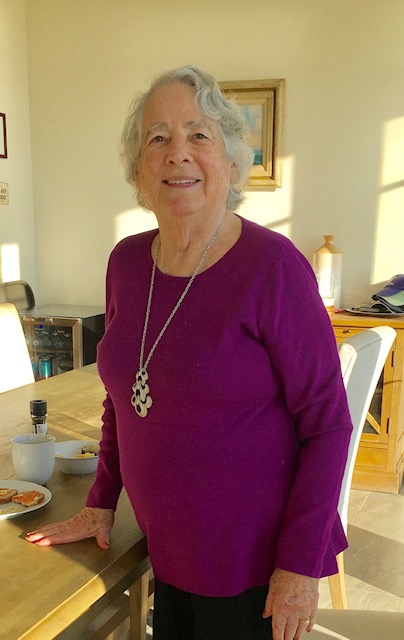 Rachel “Phyllis” Soffen died at age 88 on Saturday, February 29th, 2020.   She lived in Princeton, NJ, for many years, raising a family of five children with her husband of 50 years, Marvin Soffen. After she retired, and after Marvin passed in 2003, Phyllis also lived in Durham, NH; Portsmouth, NH; and Potomac, MD.

Phyllis was born in Washington, DC., on September 14, 1931.  Her childhood was spent in Red Bank, NJ, where she attended elementary school in a one-room schoolhouse. Later, the family moved to Washington Crossing, PA.

Phyllis graduated from the University of Pennsylvania in 1952, with a BA in Education, and then earned a MA in Child Psychology.  While in college, she met Marvin Soffen on a blind date, but dismissed him quickly because he kept agreeing with everything she said.  Later, while still in college, she fell ill with the mumps and returned home to Washington Crossing to convalesce.  Bored, she started writing letters. Marvin responded, writing eagerly and repeatedly.  She gave her besotted suitor a second chance and had the love affair of a lifetime.

Phyllis was an avid member of the League of Women Voters in Princeton, N.J., where she and Marvin made their life.  She was a supporter of the Planned Parenthood organization and a member of the Princeton Jewish Center. She volunteered her time at Recording for the Blind.

When the youngest of her five children was in grade school, Phyllis started a career teaching three-year olds at Rocky Hill Cooperative Nursery School. Her retirement party included children of children, and two generations of students.  She enjoyed telling the story of always having a father of one of the children in her class play Santa Claus during the holidays.  Typically, it seemed, it was always the child whose father was in costume who, terrified, refused tearfully to sit on Santa’s lap.

She instilled the love of reading in her children by taking the time to read to each of her five children separately (Laura Ingles Wilder, the Hardy boys, Pippi Longstocking and the Boxcar Children.)  Family April Fool’s Day breakfasts consisted of green colored milk and a soft-boiled egg – when you cracked it open, there was chocolate ice cream inside!

Her children’s friends also experienced her love of fun when they would come after school and get the standard “cookies and juice”.  This consisted of Phyllis insisting each child give her the “hole” of the striped shortbread cookie in order to receive a 4thh cookie.  All would nibble that cookie down to a delectable but impossible hole, and offer it back, but no, she wanted “no cookie at all”, “just the hole”.  This hole invariably disappeared as soon as the cookie’s rim was too tiny, and there went the chance of a 4th cookie.  She was always appropriately shocked and dismayed.

She followed in her parents’ tradition of taking each of her grandchildren on a first trip to Europe when they turned 10 (so that they might remember it).  She also loved trips to the family home at the Jersey shore, where she would ask the children to dig a hole in the sand to China and treat them to the Asbury Park boardwalk and amusement park rides.

Phyllis always looked on the bright side of every situation.  Even when Marvin, the love of her life for 50+ years died, in the first 24 hours, through her tears, she insisted “this too will pass”.   In addition to her husband Marvin, Phyllis was predeceased by her mother Mina (Greene) Ostrolenk, her father Samuel Ostrolenk, as well as her brother, David Ostrolenk.

The family will hold a private memorial service. We share grief in her passing and joy in the memories she left us.