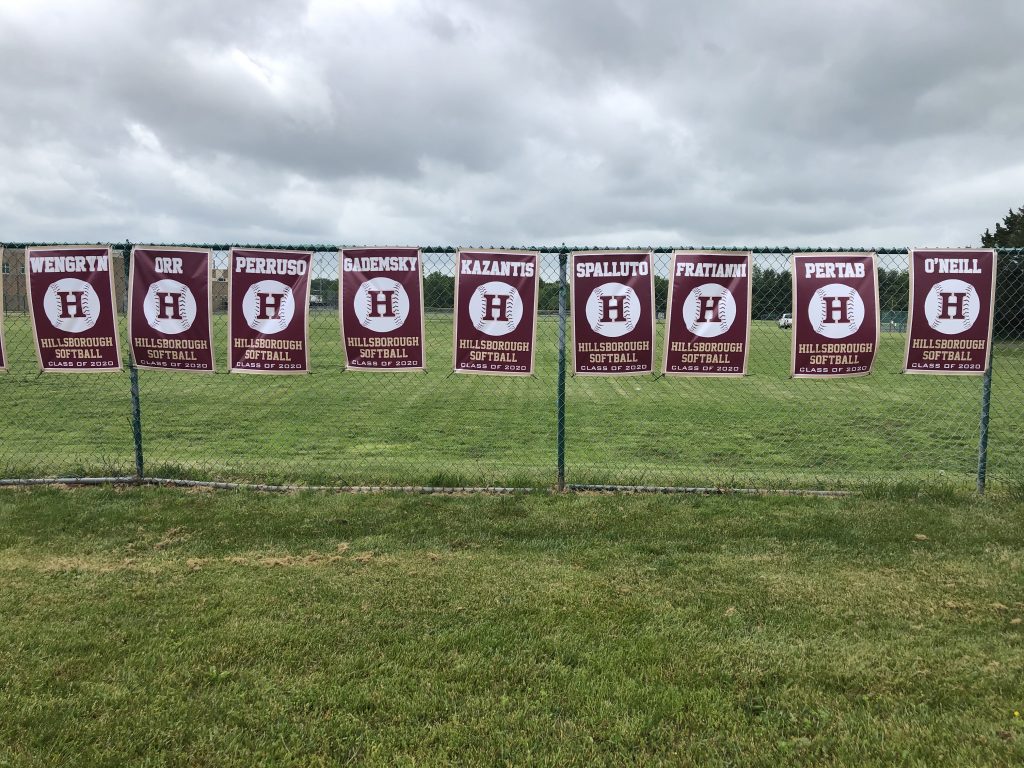 All nine of the seniors on the Hillsborough High School softball team have a banner made in their honor by the school's athletic department hung on the fence outside of the school. PHOTO COURTESY OF CHERYL IAIONE
× 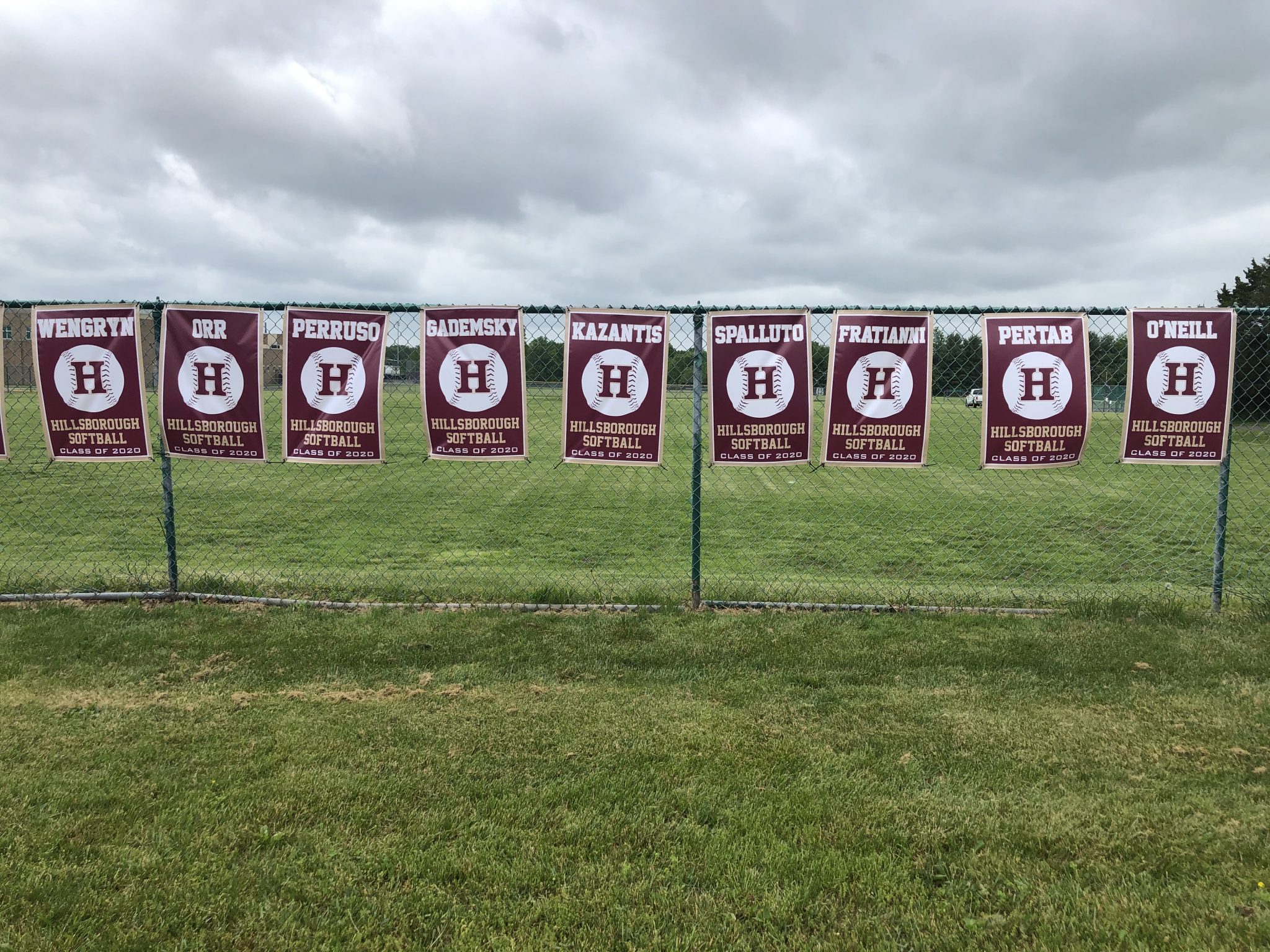 All nine of the seniors on the Hillsborough High School softball team have a banner made in their honor by the school's athletic department hung on the fence outside of the school. PHOTO COURTESY OF CHERYL IAIONE

Coming into this spring, the Raiders were geared up for a run to their 10th county championship.

Senior right-hander Courtney Wengryn was back to lead the way in the circle, and would also bring her explosive bat to a powerful Hillsborough lineup that featured junior Sierra Skala and classmates Emily Orr and Lauren Spalluto.

Overall, Hillsborough’s 2020 squad would feature nine seniors and a group of talented underclassmen that had Coach Cheryl Iaione believing her team had a good shot to be back in the county final for the third year in a row.

A season of great possibilities for the Raiders never had the opportunity to happen because of the coronavirus pandemic.

Two months of hoping and keeping shape for a possible season came to an end of May 4 when the New Jersey State Interscholastic Athletic Association canceled the spring sports season after Gov. Phil Murphy announced that schools would be closed for the rest of the academic school year.

“We were all devastated,” Iaione said. “Everyone kept hoping that we would get the chance to have a season. Our seniors lost out on their final year. We had some kids that were going to get their chance to shine that never came to be it. It was very difficult.”

Through all the uncertainty this spring, Hillsborough stuck together.

Iaione said the team would stay connected through Google Classroom. Coaches and players would share workout videos through the platform and the team’s Facebook page to help share ways for the players to stay in shape.

Iaione and her coaches would also contact players and their families every week to make sure each player was staying on task with their workouts and their virtual learning for school.

To honor their seniors, Iaione and her coaching staff drove around the town on May 20 to each senior’s house where they dropped off a lawn sign with the player’s name and number on it with a gift bag as well.

Iaione hopes the team can have a gathering of some type this summer to honor the seniors as well to give them some closure.

The Hillsborough High School athletic department honored all its senior spring sports athletes last week by putting a banner with their name on it around the school. The school said on their Twitter page that they will do the same thing for this school year’s senior fall and winter athletes in the coming weeks.

As for any plans regarding the softball team trying to get on the field this summer, Iaione said she is still waiting for word from her administrators on what the parameters will be to resume activities.

The governor announced last week that non-contact sports like softball will be able to resume on June 22.

The NJSIAA released a statement following the governor’s announcement on May 30, stating that high school athletics can begin on June 30:

Iaione admits she is chomping at the bit to get back on the field with her players.

The coach said she will be up for anything this summer and won’t be opposed to participating in a statewide tournament like the New Jersey’s Last Dance World Series proposal that was reported last week to be in the works thanks to Saint Joseph High School head baseball Coach Mike Murray.

Before any decisions are made, Iaione will make sure to speak to her players about what they would like to do.

With some players having commitments to playing for their travel team during the summer, Iaione understands she might not have a full squad.

“Once we get the OK, we will open it up to the kids and go from there,” Iaione said. “We’ll find out what we’re allowed to do on the field and how many girls we can have participating at one time. If something comes up and we can participate in it, I’d love to do it.”

The biggest takeaway through all the chaos of the pandemic for Iaione is how well her team handled the situation all spring. She watched the girls stay strong despite missing out on a chance to win back-to-back county championships and make a run at a sectional title. She saw players on the cusp of setting personal milestones and breaking school records continue to stay positive even though they did get a shot at achieving those goals.

Through it all, Iaione couldn’t be prouder of how her team dealt with the season being canceled and knows this will make them stronger for what is ahead of them.

“Our players handle everything the best they could,” Iaione said. “Their parents were very supportive of them and the team through it all. This doesn’t tarnish anything they accomplished.”