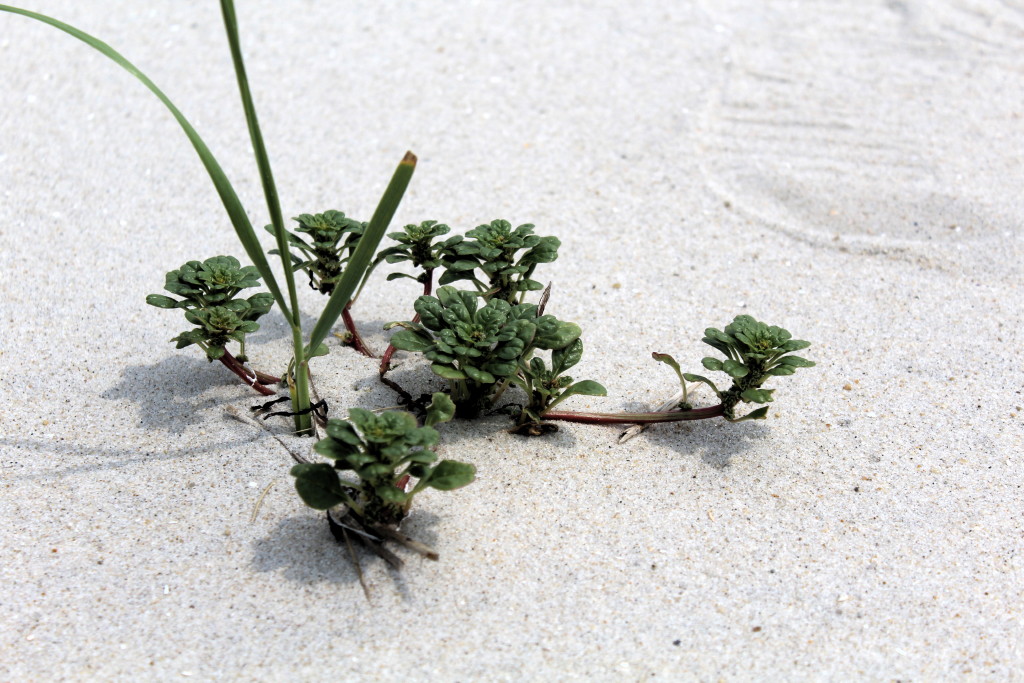 If you are lucky enough to walk on the beach this summer, you may notice a plant that looks like spinach growing in the bare sand, apart from sea grass and other dune vegetation.

Don’t step on it! It could be the rare seabeach amaranth (Amaranthus pumilus) that is making a comeback in New Jersey.

It’s good news since seabeach amaranth is a federally threatened and state endangered plant. It was rediscovered in the state in 2000 by Rutgers grad student Jay Kelly, now a biology professor at Raritan Valley Community College.

Kelly would walk the entire Atlantic coastline of New Jersey searching for the amaranth – and the little plant has come a long way since then.

A plant census along New Jersey’s coastal beaches in 2019 showed an enormous increase in the number of seabeach amaranth plants. This year’s plant census is just getting started, but biologists are hoping the encouraging trend will hold.

A member of the amaranth family – cultivated around the world as a grain and vegetable crop – the low-growing seabeach amaranth has reddish stems and small, fleshy, notched leaves resembling spinach. Their tiny pale yellow flowers begin blooming in June and July, and continue until the plant dies off in the fall.

Last year, scientists with the New Jersey Department of Environmental Protection (DEP) and the Conserve Wildlife Foundation of New Jersey counted 7,195 seabeach amaranth plants – a nearly 600% increase from the 2018 total of 1,053 plants.

Island Beach State Park has emerged as a stronghold, with 1,591 seabeach amaranth plants found last year, compared with 307 counted the previous year – a more than 400% increase.

According to the DEP, the resurgence of seabeach amaranth is especially remarkable because the plant was not seen in New Jersey from 1913 to 2000 and was considered gone from the state. The plant was rediscovered in 2000 near Sandy Hook following a beach fill project.

Jessica Ray, a plant scientist who conducts beach surveys for the DEP, explained that seabeach amaranth is an early successional plant that grows only as far up the beach as the base of dunes.

As dune plants like beach grass migrate – allowing the dune to build up – seabeach amaranth will stop growing there.

“They create a lot of seeds, just like other plants in the amaranth family,” said Ray, who also works as a scientist at Raritan Valley Community College.

Seabeach amaranth is an annual, meaning the plants counted in each year’s survey are new plants sprouting from seeds.

The seeds, dry and resistant to salt water, can be carried by wind and storm tides to new locations, and beach replenishment projects can also spread seabeach amaranth if seeds are present in the sand. Seeds are also thought to remain viable for long periods, creating seed banks in the sand.

The two main threats to seabeach amaranth, Ray said, are mechanical beach raking and vehicles on the beach.

For that reason, the U.S. Fish and Wildlife Service, which provides grants to fund the annual seabeach amaranth surveys, recommends installing “plant protection strips” to keep plants from being raked or driven over.

“As long as you are limiting the disturbance factor,” Ray said, “they will just come back naturally.”

For example, fencing installed on the beach in Long Beach Township resulted in a 300% increase in seabeach amaranth plants, and fences on the beach in Spring Lake also produced great results.

Not surprisingly, seabeach amaranth is often associated with beach-nesting birds like piping plovers, least terns, black skimmers and American oystercatchers. Typically, sections of beach are cordoned off to prevent people and machinery from getting too close to the nesting birds.

For more information about seabeach amaranth, visit the U.S. Fish and Wildlife Service website at https://www.fws.gov/northeast/njfieldoffice/endangered/amaranth.html#photos