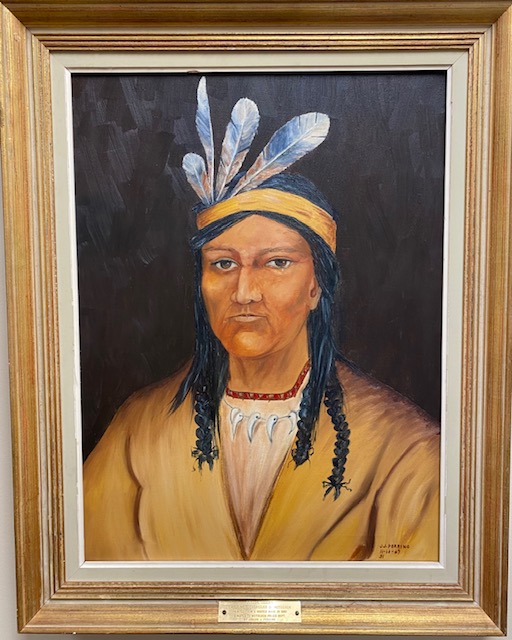 Plans to do more to recognize the Lenni-Lenape chief and Indigenous people are in the works.

In October, the borough is planning to recognize Indigenous Peoples’ Day, a day that celebrates and honors Native American peoples and commemorates their histories and cultures. The borough’s Human Relations Commission is committed to learning more about the people and culture and the Metuchen Police Department will receive sensitivity training through Rev. John R. Norwood, a renowned Nanticoke Lenni-Lenape Tribal councilman and judge.

The plans and commitment were the outcome of discussion when members of Metuchen Youth 4 Equity & Racial Justice, a non-hierarchal group of 30 young people, requested borough officials remove the Lenni-Lenape Indian Chief Metuchen on the police badge, borough seal, material and cars.

“We are on Lenape land and as a predominantly non-Indigenous group, we do not intend to speak for tribal nations and Lenape peoples, but we ask that you be as open minded and receptive to our advocacy points as possible because we’re fighting as young people for what we believe is a more inclusive and culturally sensitive place,” Grace Schleck said at a Borough Council meeting in December.

Members of the group said since Metuchen is a predominately non-Indigenous town, the town should not speak about how Indigenous people should be honored. They said the characterized image and mascot, which they believe is portrayed on the police badge, are psychologically damaging to Indigenous people and the image has become more cartoonish, losing the detail and significance of the original painting to which it was based.

Mayor Jonathan Busch said former Police Chief Joseph Perrino, who is now 100 years old, was lent what some historians believe was an original life sketch of Lenni-Lenape Indian Chief Metuchen from 1693. Perrino served as chief from 1976-85.

“[Chief] Perrino took a picture of the sketch with the department camera and created the painting we have all seen,” he said, adding Perrino was creating a painting from a life sketch. “The original [painting] hangs in the office of the police chief and a copy can be seen at the [Metuchen Public] library.”

After reviewing Metuchen’s police badge, Norwood concluded they do not view the badge as representing a mascot and they do not believe any cultural misappropriation was committed, Busch said.

“Dr. Norwood explained the image of the police patch is based upon an artist’s impression of a historically documented Lenape Chief after whom Metuchen is named,” he said. “The rendering is aimed at acknowledging and honoring the importance of Chief Metuchen to the history of Metuchen. It is dignified and it does not lend itself to negative stereotypes.”

Norwood further explained “potential collateral damage” of what he described as an “unwise or overzealous campaign could result in the erasure of any appreciative tribal history of the area.”

“In this context, [Norwood said] eliminating [Chief Metuchen] from all depiction of a very town that bears his name could have unintentional results of dishonoring him … and his history would be lost,” Busch said.

Busch said little is known about Chief Metuchen. He said from talks with the Metuchen-Edison Historical Society, there is reference of Chief Metuchen in a letter sent home from Europe and he died in the 1700s.

“None of us have done enough,” he said of recognizing Chief Metuchen and the Lenni-Lenape Indians. “Social justice is about so much more than one logo, it’s about what we teach our kids. It’s about how our representatives act and most importantly inclusion.”