Noel Powell III, a former Lawrence Township resident, was sentenced to seven years in prison and three years of supervised parole on a charge of second degree passion provocation manslaughter for shooting Devin Smith in the head as the victim sat at the bar at Applebee’s restaurant on Route 1 in Lawrence in November 2017.

It is subject to the “No Early Release Act,” which means Powell must serve at least 85% of his sentence before he is eligible for parole.

Powell will be credited with 1,208 days – the number of days he has been held in the Mercer County jail since his arrest on Nov. 19, 2017. He will be eligible for parole after serving five years, 11 months and 16 days from the day of his sentencing, Pereksta said.

Pereksta cautioned Powell that if he violates parole once he is released, he will be sent back to prison for the remainder of the three-year term.

Powell had been indicted on a charge of first-degree murder, but he was allowed to plead guilty to the lesser charge of manslaughter in a plea bargain reached last month between the Mercer County Prosecutor’s Office and defense attorney Robin Lord.

Citing reports prepared by experts in advance of the sentencing, Mercer County Assistant Prosecutor Michael Nardelli said Powell was acting in a “diminished capacity” when he killed Smith, who also lived in Lawrence.

Powell had gone to Applebee’s restaurant on Nov. 14, 2017, according to court testimony. He went into the bathroom at the restaurant. When he came out of the bathroom, he walked over to Smith, who was sitting at the bar, and shot him in the head. He fled. Smith survived for about five minutes after being shot.

Smith’s mother, Debora Lapointe, was allowed to offer comments during the virtual sentencing. She said that an ongoing dispute between her son and Powell led to her son’s death, but she did not provide details.

Lapointe told Powell at the virtual sentencing that she had forgiven him “from day one.” She said she did not hold a grudge against Powell or his family, and that she was sorry for whatever her son had done to Powell and his family.

Lapointe also said she did not believe in incarceration because it is not the answer for those who are hurting or who have mental health issues. Her own son had spent time in a juvenile detention center, a group home and in a residential facility when he was a young teenager.

Lapointe advised Powell to use his time in prison to “rethink” some things. She said she hopes that when he is released, he will take advantage of resources and ask for help.

While the incident is a loss for both families, at least Powell’s family will be able to see him, Lapointe said. She said that her family will not get to see Smith again – “not on this Earth, anyway.” 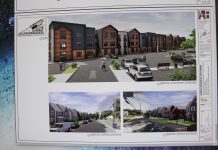