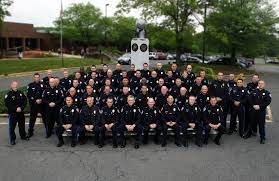 “Too often the stories that make news are negative. These officers’ efforts highlight the excellence I see firsthand every day,” Police Chief Raymond Hayducka said in a prepared statement.

On March 20, Officer Raymond McCarthy was able to de-escalate an armed confrontation at an area hotel and arrest a person without injury to anyone, according to the statement.

Police were called at 3 p.m. to the Marriott Hotel on Route 130 about a dispute on the second floor. McCarthy arrived and reportedly observed a highly agitated man with a knife trying to make entry into a second floor hotel room. The man allegedly refused to drop the knife and said he was armed to protect himself.

After several minutes of McCarthy’s calm tone and demeanor, according to reports, the man dropped the knife.

The man was taken into custody by McCarthy and Officer Tom Spilatore without further incident.

Officers determined the man with the knife and the guest in the hotel room had previously had a verbal dispute that escalated to the confrontation officers observed, according to reports.

“There is tremendous scrutiny of officers’ actions nationwide today. This case exemplifies the efforts taken daily by officers to resolve volatile situations. Officer McCarthy used time and verbal skills to get control of the situation. His efforts resolved a tense situation without injury to anyone,” Hayducka said in the statement.

The chief also recognized the lifesaving efforts for a 7-month-old on March 24.

Officers Jarrid Harpster, George Morgan and Gagan Chopra responded to the Whispering Woods Development for a baby not breathing.

Officers arrived and found the baby not breathing and being tended to be a neighbor who was a doctor, according to the statement. Officers coordinated lifesaving medical care on the baby.

Officers set up an escort for Monmouth Junction First Aid who transported the baby to Penn Medicine Princeton Health.

The baby is in stable condition, according to reports.

“Our work comes with harrowing moments with split-seconds decision. These officers worked with the next door neighbor doctor to save this baby’s life. This is another example of excellent work,” Hayducka said in the statement.