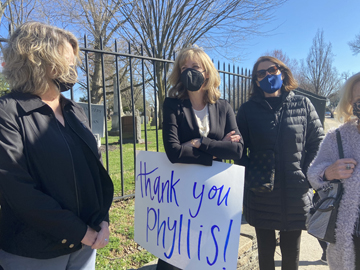 Dozens of Phyllis Marchand’s friends gathered on Tuesday, March 30, 2021 outside of the Princeton Cemetery to say thank you to Phyllis Marchand as the funeral procession drove down Wiggins Street to the private funeral ceremony. Karen Jezierny, Teri McIntire and Tamera Matteo planned the demonstration of love. Pictured here (L-R) are Teri McIntire, Tamara Matteo, and Anne O’Neill.
×

Dozens of Phyllis Marchand’s friends gathered on Tuesday, March 30, 2021 outside of the Princeton Cemetery to say thank you to Phyllis Marchand as the funeral procession drove down Wiggins Street to the private funeral ceremony. Karen Jezierny, Teri McIntire and Tamera Matteo planned the demonstration of love. Pictured here (L-R) are Teri McIntire, Tamara Matteo, and Anne O’Neill.

“Breaking News” said the news alert that popped up on my phone. “Baseball’s Opening Day matchup between the Washington Nationals and the New York Mets on Thursday (April 1, 2021) was postponed because of COVID-19 concerns.”

I swiped my phone to send a message to someone who possibly ranks as Princeton New Jersey’s number one NY Mets fan. But then queasiness came over me as I realized that sending a message would be futile.

The fan – Phyllis Marchand, former mayor of Princeton Township and longest serving Princeton (township/borough, and finally consolidated) elected official – had died on March 25, 2021; she was buried March 30, at the Princeton Cemetery in a private ceremony.

At first glance, Phyllis’s fame and enormous popularity are unrelated to her Mets fandom. Her accomplishments on behalf of the Princeton community have been well documented in the past week by hundreds of people who posted messages of love and admiration on the Marchand PostHope website, as well as by dozens of her friends and family members who attended the family’s virtual Shiva services. Her extraordinary community accomplishments affecting tens of thousands of individuals over the course of her 55 years in Princeton were far too numerous for one obituary.

She needs a Phyllis Library of community commitments to document all that she did in areas including open space, sustainability, affordable housing, the arts, social and human services, women’s rights, Jewish education – and for many Princetonians the most memorable accomplishment – deer management.

On closer inspection, however, her fame has everything to do with the NY Mets. A native New Yorker, Phyllis’s commitment to the Mets was like a marriage vow, for better and for worse, in winning times and not so winning times. Loyalty – not bland, lukewarm loyalty, but intense, passionate I-always-will-have-your-back loyalty – was key to her relationship to the NY Mets and her much loved husband of 57 years, their three children and eight grandchildren, and all of her numerous “close” friends.

Hundreds of Princetonians considered her their best friend, as evidenced by a demonstration organized on the day of her funeral. Dozens of Phyllis fans stood on the four street corners at the intersection of Witherspoon/Robeson Place/Wiggins in order to wave and clap as the funeral procession drove past to the Princeton Cemetery. Karen Jezierny, Teri McIntire, Tamera Matteo organized the complicated logistics of the demonstration of love and thanks to Phyllis. And I love them and thank them for doing so.

Those who valued humanity and treated people fairly and with respect earned her friendship. It didn’t matter if you were rich, poor, Black, White, Jewish, Christian, Muslim, atheist, registered Democrat, registered Republican, MD, PhD, eighth grade graduate, divorced, married, never married, young, old, marathoner (as she was with 18 marathons to her credit), couch potato, Mets fan, or even Yankees fan (generally despised by Mets fans). My passion for the NY Yankees rivaled her passion for the Mets. But that fact never stood in the way of our friendship – even when the two teams played one another.

The other fact I would have texted Phyllis is that the Yankees lost their opening game, a 3-2 loss to the Toronto Blue Jays.

And like a good baseball game, the basis of friendship with Phyllis Marchand was action – not just sitting over a cup of coffee or bowl of mocha chip ice cream (more accurately a cardboard container of mocha chip ice cream, because dishing it into a bowl was just an unnecessary step). She solved problems. She and her giant Filofax/appointments calendar and an additional giant address book were lugged everywhere she went. It was her magic wand that enabled her to refer her friends to other friends and resources solving all sorts of conundrums.

Dolly Levi was no match for Phyllis Marchand. She certainly enjoyed the many marriage ceremonies over which she presided and particularly those marriages featuring partners she had introduced. Her strongest matchmaking skills, however, were devoted to solving problems by matching individuals to appropriate governmental and social services and other people “who might do you some good.” Although she was a conversationalist par excellence, she was a careful listener and quickly assessed a person’s problem and always offered concrete help, not just words of solace.

Her life was filled with extra innings events – both watching extra inning baseball games, sometimes ’til dawn, and attending extra innings events. She generally was the last person to leave any charitable function, because there was one more important conversation, one more person to help. Her husband and her children tolerated that quality, as irritating as it may have been. It was their way of contributing to the greater good of the community.

Also, she got many extra innings out of her life, requiring perseverance and never giving up in the face of adversity. In a period of over 15 years of unrelenting and very difficult treatment protocols for CTCL lymphoma, non-Hodgkin’s lymphoma and lymphoma, Phyllis just kept on going, running around those bases of life. It didn’t matter that the odds and statistics were against her winning, she rallied in those overtime innings and gave her family many more invaluable years together and continued to support countless people, including those affected by her form of cancer.

The virtual Shiva services, beautifully and professionally led by the Princeton Jewish Center Cantor Jeff Warschauer, using a prayer book by Princeton’s Rabbi Cantor Bob Freedman, took place on the last day of March and first day of April. The timing corresponded with launching Holocaust Remembrance Month. Columnist Brett Stephens, in a New York Times op-ed of April 2 about remembering the Holocaust, noted “Judaism is a religion that cherishes life and memory alike, and believes that we live best, and understand best, when we remember well.”

No one who knew Phyllis will ever forget her. My personal challenge is to figure out how to communicate to future generations the beauty and value of this extraordinary community leader.