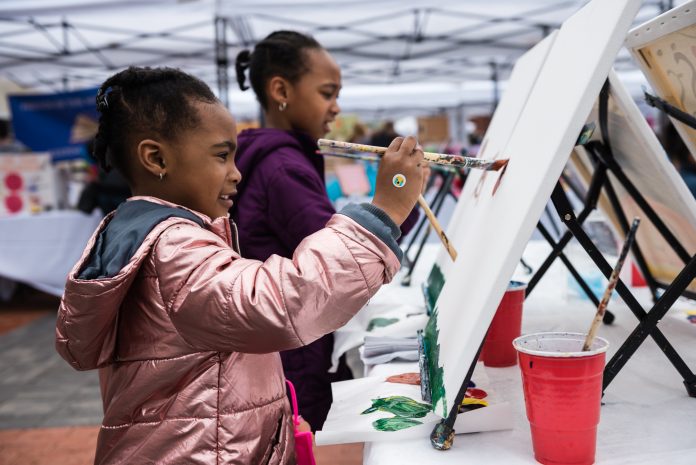 METUCHEN – There’s no question the return of the Spring Bazaar, taking place May 15 from 11 a.m. to 4 p.m. on the Metuchen Town Plaza, will attempt to raise spirits throughout the community.

Presented by the Metuchen Downtown Alliance, the popular artisan market was paused last year due to concerns surrounding the COVID-19 pandemic.

With mandated restrictions on social gatherings relaxed, the bazaar returns to celebrate all that makes the borough unique, from local vendors to community spirit.

And, as always, with a few surprises thrown in.

“In the past, there has been Bollywood dancing, American Ninja Warriors, wrestling in the plaza. We like to push the envelope as to what downtowns can do,” said volunteer Bobbie Fawcett, who serves as chair of promotions for the Metuchen Downtown Alliance and vice chair of its board. “We strive to be inclusive and reflective.”

Isaac Kremer, executive director of the Metuchen Downtown Alliance, welcomed the return of the popular community event as an early sign of a return to pre-pandemic life.

“I think it’s refreshing to see the Town Plaza come back to life and it represents one of the first steps to getting life back to the way we knew it,” he said.

The Spring Bazaar is an artisan market, with every detail overseen by Downtown Alliance volunteers. This year, according to Fawcett, there are extra steps being taken in light of the pandemic.

“In the case of the bazaar, we are very COVID-aware,” she said. “We are limiting the number of vendors, all the folks who are working individually, local artisans and jewelers, to about 15 or 16.”

According to Fawcett, the Downtown Alliance initially introduced the Spring Bazaar as a Mother’s Day event.

“This year we’re doing it as a Spring Bazaar just because Mother’s Day is earlier this year than usual. There’ll be music by a DJ, food by artisan vendors, the same kind of vibe — edgy, fun, hip kinds of things.

“It’s not like a street fair,” she added. “There’s just pretty cool vendors, like the guy who makes his own hot sauces.”

And, she emphasized, the event extends beyond the Town Plaza, with shopping and dining encouraged all throughout the downtown.

“The food is local and we try to encourage people to eat around Metuchen,” Fawcett said.

This year they will be adding a #BeYourBestSelfie wall, she said, thanks to sponsor @Woodmont Metro.

“It’s a fun wall. You can take a photo at the wall if you make a donation to the food pantry,” she said, adding last year 1,400 pounds of food were donated.

A donation of home goods will benefit the Metuchen High School outreach, Breaking the Chain, which supports at-risk children in Ghana, Africa.

Also returning will be Painting on the Plaza hosted by the Friends of the Metuchen Library.