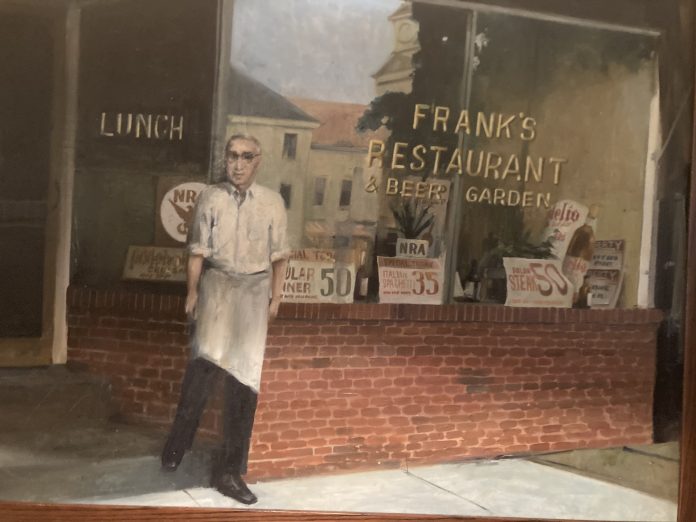 On July 1, 1921, Frank and Esther Federici purchased the Wolcott Hotel in what would eventually become known as Downtown Freehold.

Frank was born in 1890 and moved from Castelgrande, Italy, to the United States as a 16-year-old. In 1906 he came through Ellis Island, first living in Brooklyn, New York, before moving to Montclair.

He met his future wife, Esther, in Montclair, and they moved down to Freehold Borough. Esther was originally from Foggia, Italy, and immigrated when she was 28.

Frank, who spoke English clearly, was a court interpreter in the borough.

In 1921, the location was originally a type of bed-and-breakfast. Of the 12 rooms, 10 were rented out for weekly or month stays, and the Federicis occupied the other two rooms as their home.

They would cook for the few people staying in the hotel, or sometimes people off the street.

In 1932, after Prohibition ended, Frank was granted a liquor license. The sitting room for the hotel became a bar, and is still a bar today.

In 1946, Frank’s sons Frank and Dante came home from World War II. Having no job they came to work for their parents, and they introduced tomato pies (aka pizza) to the business.

Before then, Frank’s Restaurant and Beer Garden, as it was known, served sirloin steak (for 50 cents), pasta, pasta fagioli, and spaghetti and meatballs (for 35 cents).

In 1979, the expanded kitchen allowed for a more full menu with pizza, sandwiches, seafood and northern Italian cuisine.

“When you’re three generations, there is a lot of good history,” said their grandson Michael Federici, who now co-owns Federici’s Family Restaurant on East Main Street with his mother, Patricia, and his brothers David and John.

In 1956, Michael Federici’s father Frank and mother Patricia were married. The boys worked in the restaurant their whole lives, Federici said; he started as a 12-year-old bussing tables and washing dishes. He said he was self-driven, and enjoyed being in the restaurant and making his own money; working was much more than a family chore to him.

That self-driven nature allowed him and his family to persevere through the COVID-19 pandemic.

Despite the hardships, Federici did not doubt the future of the business, and knew financially they could/would survive. He knew they would be celebrating 100 years in business.

“There’s a lot of pride there. There is a lot of thankfulness for my grandparents, for the community,” he said. “We have been serving the community for 100 years; that’s a really long time.”

Living his life in Freehold until about 10 years ago, Federici recognizes how special the area is. As the county seat, the courthouse, hall of records, borough clerk and everything residents need are in the borough.

“If you haven’t come to Freehold, something is not right,” he laughed.

For the upcoming 100th anniversary, Federici said there have been raffles and giveaways since January in the hopes of a grand prize invitation to a closed restaurant complete with dinner and drinks.

Especially for You Florist opened in 1976 by Marlene Rogala’s parents, and will celebrate its 45th anniversary this summer.

Marlene Rogala said her mother was very focused and driven, and she wanted to open her own business after working for McGraw Hill in Hightstown.

So, she went to New York to learn floral design, and coming from a family of artists and creatives, she learned the business aspects and eventually purchased the former Harris Pharmacy at age 50.

Marlene Rogala was the bookkeeper and office manager for the florist at the time.

In 1988, Marlene and her husband, Stephen Sr., took over the shop when her parents retired, and although their children, Stephen Jr. and Laura, went into separate careers, they eventually came back to the family business.

“It’s been very good to us ever since,” Marlene Rogala said.

Freehold Borough was attractive because the family had relatives there.

And the corner lot on West Main Street and Throckmorton Street has good visibility, she said.

The pandemic brought a reduction in workload, as the absence of parties and celebrations required less floral arrangements. Plus, in the beginning, even funerals weren’t taking place, or flower arrangements were limited, so the Rogalas had to focus on sending bouquets either as a get well symbol, or as a pick-me-up.

Their nine full-time employees were reduced to just Marlene, her husband and her two children, until Mother’s Day 2020 when the staff was able to return part-time.

“It certainly was devastating but we could do a little bit for people and make people feel better along the way,” she said.

Now that Especially for You is back to full-time operations, the staff prepared for a busy Mother’s Day weekend 2021.

Marlene Rogala said the thought of closing did cross her mind early on, but she didn’t think her family business would shut down completely because she knew there would be a steady uptrend.

“We have history we have here in town,” she said. “After 45 years, you kind of know where you have to be.

“In my mind, you have to give to get,” she said, noting the tight-knit community of Freehold Borough that supports each other. “I would go nowhere else.”

Homes & Living – The kitchen is where memories are made