Freehold Raceway will begin the summer/fall harness racing meet on Aug. 27 with a 10-race card.

The summer/fall meet is generally headlined by the New Jersey Sire Stakes – Standardbred Development Fund series and this year is no exception, according to a press release.

The series kicks off on Aug. 27 with the first leg of the series for 3-year-old filly trotters. The race drew 10 entries and was split into two divisions of five.

Ron Burke holds the upper hand in both divisions.

In the first division, scheduled as the fifth race, Burke will send out likely heavy favorite Hot as Hill. She has been stakes-placed several times this year and was most recently seventh in the Hambletonian Oaks at the Meadowlands.

Hot as Hill will leave from post position three with Joe Bongiorno down to drive. Because of her presence, there will be no place or show wagering on that race.

In the second division, which will be the eighth race on the program, Burke also has the likely favorite in Avenir. She has won her last two races, including an impressive win in 1:54 3/5 last out at Harrah’s Philadelphia.

Avenir has post position two with Bongiorno in tow. Her toughest competition will come from her inside in Pub Crawl, who won a leg of the Pennsylvania Sire Stakes at the Meadows in July. Andy Miller has the drive for trainer Julie Miller.

The Aug. 27 card also features the Fillies & Mares Preferred Handicap pace, scheduled as the sixth race. Burke has the likely favorite in Feelin Red Hot. She will leave from the outside post in the field of six. 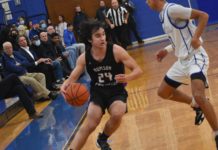