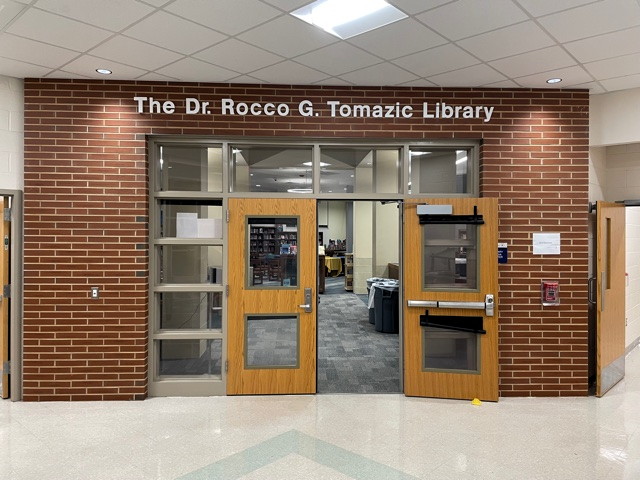 FREEHOLD – The new library at the Park Avenue Complex in Freehold Borough has been named for Rocco G. Tomazic.

Tomazic served as the superintendent of schools in the Freehold Borough K-8 School District from 2013-21. He retired on Sept. 1.

The complex on Park Avenue houses the Park Avenue Elementary School and the Freehold Intermediate School.

A ceremony naming the sparkling new facility The Dr. Rocco G. Tomazic Library was held on Sept. 13 and followed the Aug. 30 passage of a resolution by the Board of Education to honor Tomazic in that manner.

The new library at the Park Avenue Complex opened in 2018. The room was constructed as part of a project that expanded Freehold Borough’s educational facilities to handle an increase in pupil enrollment.

Prior to the completion of the construction project, district administrators had been using the previous library at the Park Avenue Complex as classroom space.

Board members noted in a resolution that Tomazic oversaw the construction project’s approval process by state education officials.

“The Freehold Borough Board of Education wishes to express heartfelt gratitude to Dr. Tomazic for his years of dedicated service to the community.

“(His) contributions to the schools are too many to list, but notably include advocacy for the additions and renovations to district facilities, including a new library at the Park Avenue Complex,” board members said in the resolution.

Howe praised Tomazic for his role in having the new library constructed.

“Prior to 2018, students at the Park Avenue Complex did not have the same access to a library in school as students across the state do.

“Dr. Tomazic’s advocacy for proper facilities for our students culminated in the construction of this beautiful library space that over 1,000 students in Freehold Borough benefit from every year.

“Naming the library after Dr. Tomazic is a fitting dedication to his devotion to learning and to our students,” Howe said.