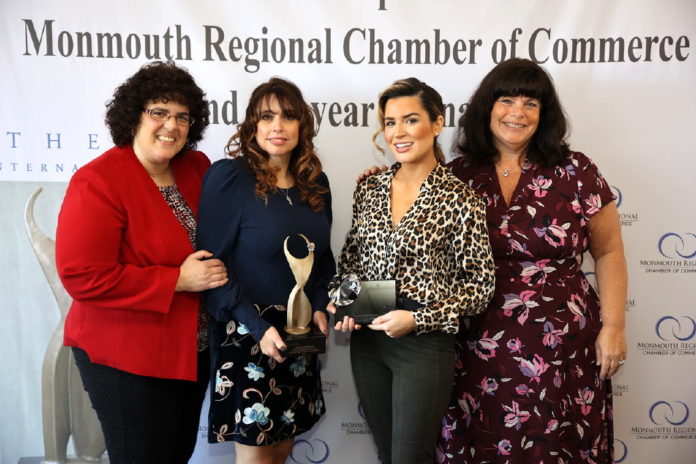 The Monmouth Regional Chamber of Commerce (MRCC) closed out 2021 with a celebration of one of the organization’s signature events, the International Athena Leadership Awards Luncheon.

The gala event, held in November at the Jumping Brook Country Club, Neptune, honored individuals for their outstanding professional accomplishments, community service and mentoring of women to help them achieve their full leadership potential, according to a press release.

The 2021 Athena Leadership Award was presented to Jodi Grinwald. With more than 16 years of nonprofit experience, Grinwald started her career as a regional director at the American Heart Association, rising to executive director.

She next served as vice president of development for the American Lung Association of the Mid-Atlantic.

In 2017, she became co-founder and CEO of the Zzak G. Applaud Our Kids Foundation, which provides ongoing funding for children with financial needs to take ongoing lessons at performing arts studios close to their homes for up to 15 years.

Grinwald launched and is the lead for the statewide NJBIA Not-for-Profit Council and has chaired the NJBIA Women Business Leaders Council and Forum.

In 2020, Grinwald launched the Today is the Day Changemakers Podcast and YouTube channel, where she interviews changemakers and inspirers.

In March, she will launch the first international Today is the Day Changemakers Virtual Forum, connecting leaders from a range of backgrounds and industries for an inspiring global summit. She is currently writing a book about her quest to help people feel more connected, according to the press release.

In June 2021, Henderson held “Stars of Women in Business,” a red-carpet networking and awards event where women leaders in television, business and the nonprofit arena were honored for their contributions to the community and the advancement of women, and the inaugural Kristina Henderson Empowering Young Women Scholarship for college was presented, according to the press release.

Henderson is an ambassador for Tigger House Foundation, an organization to prevent drug abuse, and is on the advisory board for the Zzak G. Applaud Our Kids Foundation.

She was a flight attendant before going on to be a television news producer in New Hampshire and later establishing, with her husband, Henderson Promos, LLC, and the nonprofit Bart and Kristina Henderson Foundation, which will help fund community projects.

Henderson is also the co-founder of the Giving Back Forum, an event that brings together more than 65 community nonprofits in one space to learn from one another, share resources and promote awareness for their causes, according to the press release.

Grinwald and Henderson are now working with other MRCC Athena committee members to plan and promote this year’s event and the importance of the International Athena Leadership Award program, which celebrates women as valued leaders who serve as role models and give back to the community in profoundly meaningful ways, according to the press release.

The MRCC is the only organization in New Jersey that is licensed to present the Athena Award and has hosted the event for 36 years; 2021 marked the seventh year the MRCC has presented the Athena Young Professional Leadership Award, recognizing community leaders between the ages of 24 and 40. The 2022 Athena Awards event will be held in November, according to the press release.