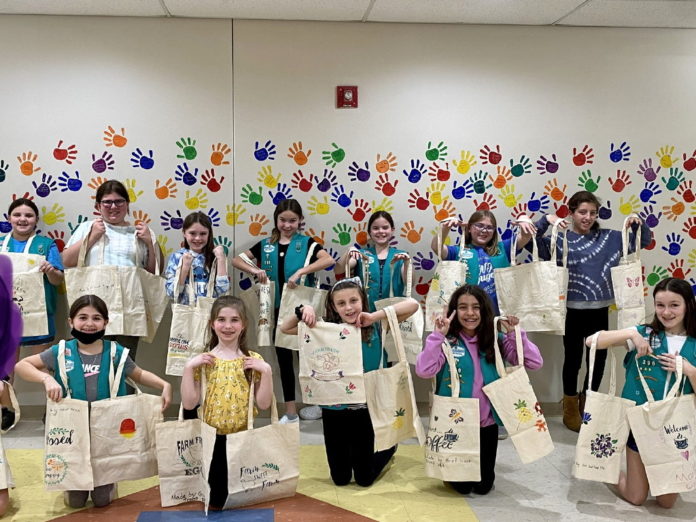 Just ahead of a ban on single-use plastic grocery bags that took effect on May 4, Junior Scouts in Troop 396 took on a project to decorate and donate reusable cloth bags that will be used for food distribution at the Jackson Food Pantry.

“It is such a really nice surprise,” said Joy Rende, the director of the food pantry, which is
sponsored by the Jackson Women of Today. “What’s more important is that they personalized the bags, that means a lot.

“The girls in the troop have come to the pantry after hours so they could get to
understand what the pantry is about,” said Rende, whose granddaughter is one of
the 14 Junior Scouts in the local troop who have been together since kindergarten.

According to Troop 396 co-leader Jessica Segui, one of the troop members has given
the scouts insight into the mission of the food pantry.

“One of the Girl Scouts in our troop is Vicki Cocozello and her family volunteers at
the food pantry,” Segui explained. “Vicki volunteers at the pantry all the time and we
wanted to do a tour and help however we could.

“In March we went to the food pantry and Vicki led our girls in one hour of sorting food.
She showed them how to check expiration dates, how the (food pantry volunteers) organize everything.

“So when we came to volunteer, we brought bags of food to donate and then the girls spent time cleaning shelves, clearing things up. It was a great experience for them and it is right in Jackson, which is important for us,” she said.

Segui, whose daughter, Emily, is a troop member, explained that the project fulfills a
community service requirement for the Junior Scouts.

“One of the great opportunities the Girl Scouts have in addition to earning their badges is also to work on a project called Journeys,” explained Segui, who teaches at the high school level.

“The girls dig deeper into their interests and use the skills they gain along the way to make a difference in their community … because that is such an important aspect of Girl Scouts – serving the community around us.

“So when it came to the point where we were going to talk about our big project for
the end of ‘The Journey’ and what it means to find power in the community, the idea was how can we support the food pantry beyond just going back to help to serve for a couple of hours,” she said.

Decorating and donating some six dozen cloth bags offered an opportunity for the girls to complete work on a required service project, said Segui, explaining that funds raised through cookie sales were used to pay for supplies.

Segui credits troop co-leader Kristin Alcott with the idea for decorating and donating the cloth bags to the food pantry.

“Kristin said, ‘We are going to be getting rid of (single-use) plastic bags everywhere in May and we have a very artistic troop, they love art. Anytime we can do crafts and art and
community service they love it.’

“So we ordered plain canvas bags and stencils with all different kinds of flowers and
food themes and we ordered fabric markers and we made around 96 bags, several
dozen, and sent them with Vicki Cocozello to the food pantry,” Segui said.

“We stuck with a food and nature theme because it was going to be for picking up
food, so the girls liked that, and also to kind of honor the Earth because that is why
we are getting rid of the plastic bags. It was a great project for the girls and service to
the community,” she said.

The message of the project, according to Segui, was, “You don’t have to go far away to
serve and you can make a difference right in your own town.”

According to Alcott, whose daughter, Addison, is a troop member, the girls embraced the project.

“They are really a good troop, kind of like family. They get along, they are kind. The girls at this level work on a Bronze Award, which is a whole group community project that they come up with on their own.

“We wanted to do a community project and it popped into my head that the bag ban was
coming so maybe we could do something with that. So we talked about it and said, ‘Let’s do it,’ ” she said.

The idea was a hit with the troop members, said Alcott, who teaches second grade.

“The girls are all willing to go the extra mile to do something to help their community,” said Alcott, who stepped up from “cookie mom” to troop co-leader. “The bags was just one of those ideas that popped into our heads and it started to spiral into this beautiful thing.

“Jessica (Segui) and I are both teachers and what we see in the classroom each day, maybe that’s what drives us to help make these kids be better people. There is more to the world than electronics. We tell them it is important to be kind. Just be kind,” Alcott said.

According to Rende, the Jackson Women of Today food pantry is at 10 Don Connor Blvd. and serves residents of Jackson, Lakewood, Whiting and Manchester. The food pantry serves between 100 and 150 people each month.

The food pantry hours are every Saturday from 10 a.m. to noon, and the last Wednesday and Thursday of each month from 4:30-6 p.m.