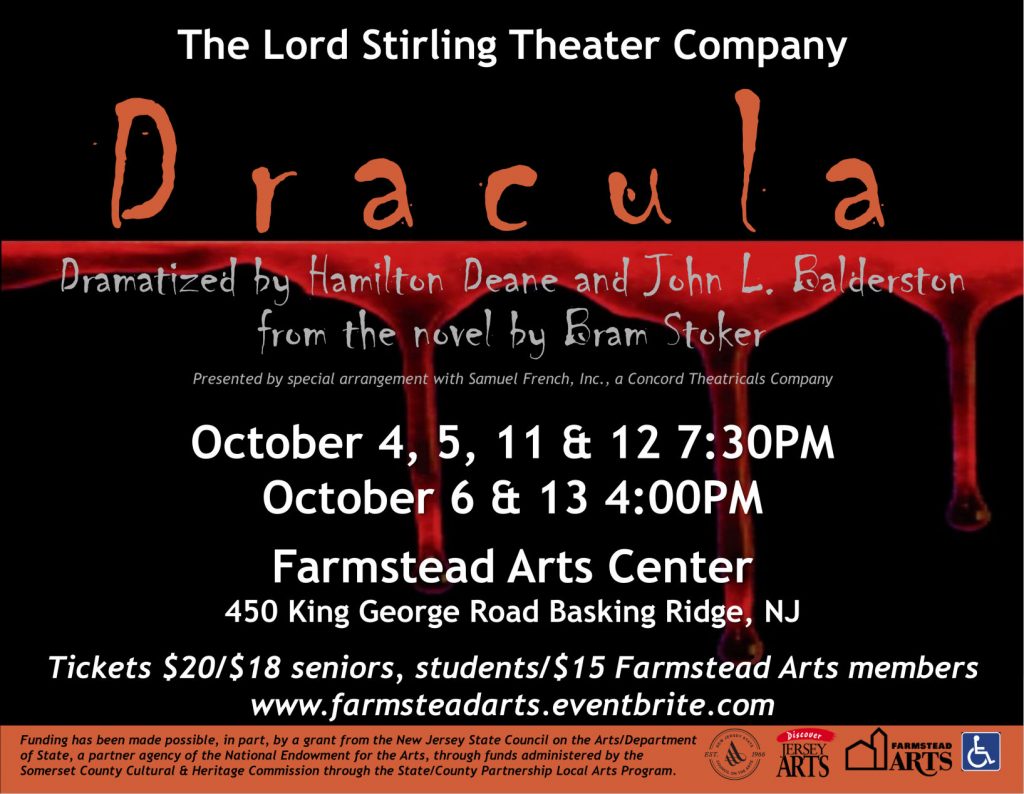 The Lord Stirling Theater Company will perform “Dracula” in the English Barn Theater at the Farmstead Arts Center, 450 King George Road, Basking Ridge, NJ. “Dracula” will open on Friday, October 4, at 7:30PM, with additional performances on October 5 at 7:30PM, October 6 at 4:00PM, October 11 and 12 at 7:30PM, and October 13 at 4:00PM. Tickets are $20 general admission, $18 for seniors (65 and over) and students (under 18), and $15 for Farmstead Arts members. Tickets may be purchased online at http://farmsteadarts.eventbrite.com or at the door (cash only).
“Dracula” is the first authorized stage adaptation of Bram Stoker’s classic 1897 vampire novel. Written by Hamilton Deane in 1924, then revised by John L. Balderston in 1927, the play was produced on Broadway in 1927, with Bela Lugosi in the lead. Lugosi went on to immortalize the role in the 1931 film, which was based on the play. “Dracula” returned to Broadway in a 1977 revival starring Frank Langella. It won the Tony Award for Best Revival and led to another movie version in 1979, also starring Langella.
Lucy, Dr. Seward’s daughter and John Harker’s fiancee, is suffering from the same mysterious illness that took the life of her friend Mina. Dr. Seward has called his old friend Abraham Van Helsing, an expert on strange illnesses and forgotten lore, to help diagnose and treat her. The terrible dreams that Lucy has been having, her anemia, and the two red pinprick wounds at her throat, lead Van Helsing to believe she is the victim of a vampire. He suspects their charismatic new neighbor from Transylvania, Count Dracula. To protect Lucy from transforming into a vampire herself, Van Helsing, Dr. Seward, and Harker must kill Dracula with a stake to the heart.
“Dracula” is presented by special arrangement with Samuel French, Inc., a Concord Theatricals Company.