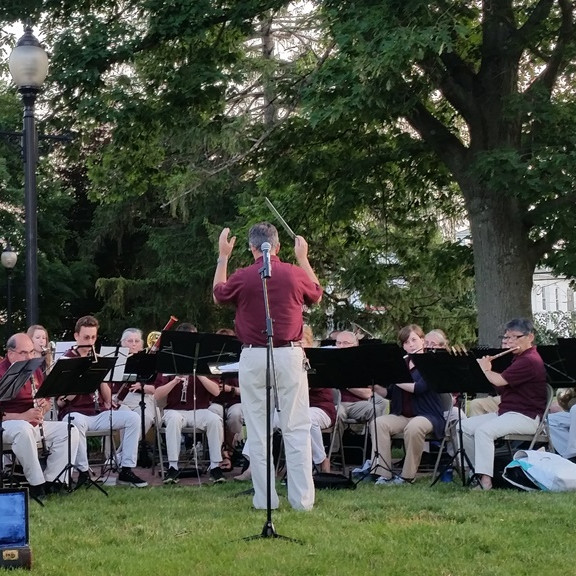 The Whitehouse Wind Symphony, a community band under the direction of Branchburg resident James P. Sheeley, Jr., will present a free outdoor concert on Saturday, July 10th at 12pm at the Field of HonorⓇ at the Jacobus Vanderveer House (3055 River Road, Bedminster, NJ 07921).

This concert is the first-ever collaboration between the band and the Friends of the Jacobus Vanderveer House. The program will feature patriotic selections such as “America the Beautiful,” marches by John Philip Sousa, medleys of rock songs from the 1980s and big band jazz hits by Frank Sinatra, and selections from Broadway musicals such as “The Music Man.” This concert is just one of many events taking place on the north field to commemorate the reopening of the Jacobus Vanderveer House and Museum. A fitting backdrop to the concert, over 200 American flags will be on display as part of the sixth annual Field of HonorⓇ. This display pays tribute to our country’s independence and those who have served our country with pride and dignity.

The concert is free and open to the general public, although donations will be accepted to benefit the band, a non-profit group comprised entirely of volunteer musicians. Audience members of all ages are encouraged to bring picnic blankets and chairs. In the event of inclement weather or public health emergency, the announcement to postpone or cancel this concert will be made on the band’s website (whitehousewindsymphony.org), Facebook page (facebook.com/whitehousewind), and Instagram feed (instagram.com/whitehousewind). Attendees must adhere to all safety guidelines as recommended by the Center for Disease Control and mandated by the local and state government. Attendance is at one’s own risk; discretion is advised, especially for those at high-risk for infection for COVID-19.

The Whitehouse Wind Symphony was founded by conductor emeritus Casey Bork on April 15, 1996. It is dedicated to presenting the best in all varieties of wind band literature. Since its founding, the band has grown rapidly, attracting experienced musicians as regular members from all over New Jersey, as well as New York City and eastern Pennsylvania. It is now comprised of approximately 50 amateur and professional musicians who perform together regularly to enthusiastic audiences throughout central and northern New Jersey. The band was recently named the winner of the 2021 Hunterdon Happening List in the category of favorite band/musician!

The Whitehouse Wind Symphony is committed to making music accessible to all. The concert site is accessible and there are designated handicapped parking spaces, however the driveway is gravel and the lawn may be uneven. There will be limited restroom access during this event but both the restroom and the access are ADA compliant. For information about venue accessibility, please send an email to whitehousewindsymphony@gmail.com, or call the band’s ADA coordinator, Margaret Smith, at 908-534-6662.

Funding has been made possible in part by the New Jersey State Council on the Arts/Department of State, a Partner Agency of the National Endowment for the Arts, through funds administered by the Hunterdon County Cultural & Heritage Commission.

The Friends of the Jacobus Vanderveer House received an operating support grant from the New Jersey Historical Commission, a division of the Department of State.