Junior Raider football player Nathan Bienstock of Hillsborough has been named one of 14 national finalists for the 2015 “Playmaker of the Year” program. He is in 2nd grade at Sunnymead Elementary School.
Presented by USA Football and EA Sports, the program honors the top youth flag football players across the nation.
Daniel Spera, a Montgomery flag football player, was another of 14. Fourteen players from 11 states were named finalists. Others are from Florida, Virginia, Illinois, New York, Ohio, Louisiana and Hawaii.
Nathan, who was nominated by an NFL FLAG coach, will submit a video showcasing why he/she should be named USA Football Playmaker of the Year and will have the opportunity to win prizes.
As the national governing body of the sport, USA Football unifies the football community nationwide, inspiring participation, creating positive playing experiences and teaching the sport’s fundamentals. 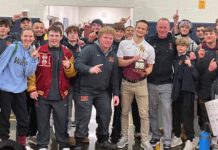 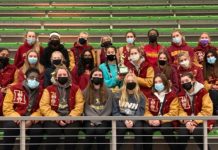 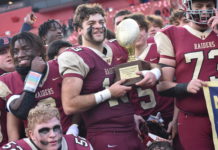