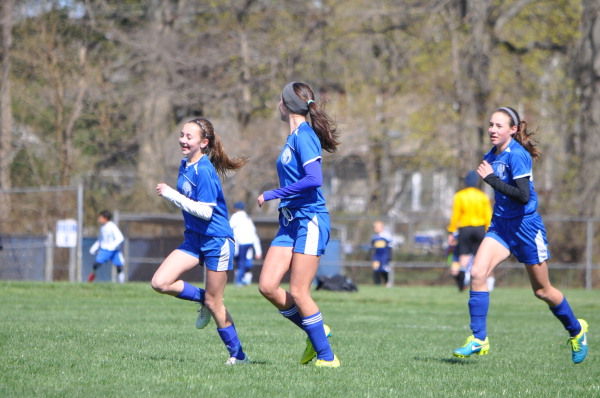 From left to right

From left to right

U8 Blue Dragons
The East Windsor PAL U8 Blue Dragons defeated Holmdel FC Donovan 5-4 in the season opener. Alexander Garcia and Sebastian Rincon led the way with three and two goals respectively. Goal tending duties were shared by Ilias Bettendorf, Jayden Baffoe-Bonnie and Dylan Stables. 
U14 Girls Storm
The Storm started the spring season battling against Wall and cold strong winds to a 3-3 draw. Starting downwind in the first half the Storm took an early lead off a well-placed corner from Julia Pendino which Mikayla Capasso drove to the top right corner of the net. Wall tied it up soon after off its own corner.
Later in the half, Jessica Saldutti fought through a crowd at the 18 placing a beautiful ball to Grace O’Leary’s foot in front of the open goal to retake the lead. As the half was closing Danielle Faup, pinching from the striker position, drove the ball to Julia Gorajek who split two defenders and placed the ball to the opposite post for the 3-1 lead.
Keeper Mary Kate Hartnett was stellar throughout helped by the Storm’s defense, including Lili Iavarone, Jessica Gratkowski and Meg Regan, who held strong against the wind and strong set plays from Wall. Wall eventually tied the game 3-3. Both sides made desperate plays with Wall striking the crossbar and Storm striking the post with minutes left. 
U10 Arsenal
Opening day for the spring season was a success for the East Windsor PAL U10 Arsenal. They won their first game in the competitive Premier Division, defeating rival Old Bridge Octane 2-0.
Played on the road in cold temperatures and 40 mph wind gusts, Rachael Charsky opened the scoring in the second half, followed by a goal by Ally Szelag with an assist from Abby Carter. The defensive play from Charlotte Garcia and Tanya Augenbaugh shut down the strong Old Bridge attack. Angelina Benitez played the full game in goal making several key saves and picking up her first shutout of the season.