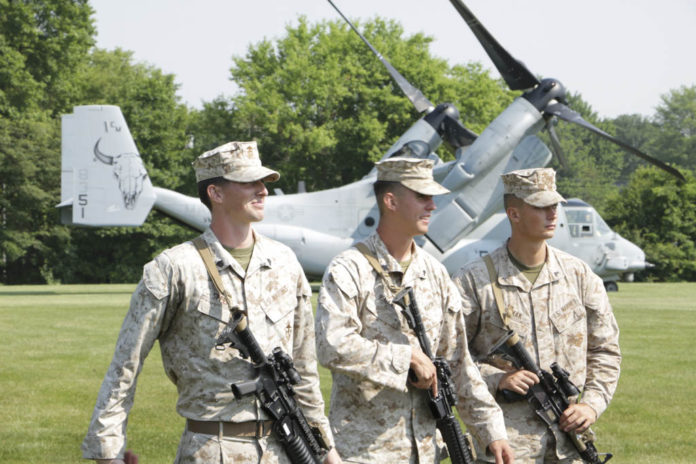 EAST BRUNSWICK — The two giant Marine Corps helicopters swept in over the Brunswick Square Mall and circled to land on the soccer field on the East Brunswick Campus of the Middlesex County Vocational and Technical Schools (MCVTS).

The visit by the helicopters — a 57-foot-long MV-22 Osprey, a tilt-rotor troop carrier with a range of over 1,000 miles, and a CH-53E Super Stallion, the largest and heaviest helicopter in the U.S. military, designed for such duties as mine sweeping and heavy lifting — was received by more than 700 MCVTS students and hundreds of local residents on May 27, according to a statement prepared by the school.

Several dozen Marines in combat gear emerged to display and demonstrate infantry equipment such as a bomb robot, assault weapons and machine guns.

“We like to let everybody see the Marines and let the Marines see the people,” said Capt. Brendan McIntyre of the Marine Corps public affairs office in New York City.

McIntyre explained that the helicopters flew in from Teterboro Airport, where they were staged as part of New York Fleet Week. The infantry Marines had arrived in New York aboard the USS Bataan, an amphibious assault ship.

“USA” had been mowed into the field and outlined in red, white and blue to greet the visitors. Students waved American flags and chanted “USA” before touring the helicopters. Some of the youngsters donned flak jackets and helmets and posed with weapons, according to the statement.

Two MCVTS students, Verne Whitlock, a sophomore from East Brunswick, and Emily Cianfaglione, a sophomore from Sayreville, held up signs spelling out “Ooh rah,” a Marine battle cry, according to the statement. They said they were inspired to make the signs by one of their teachers, Brien Wiseman, who had been a Navy Seabee.

“We wanted to make the Marines laugh when they’re landing,” Verne said.

Five videographers and two still photographers from Louis Libitz’s digital film class were recording the event for a short film.

Some of the students competed for prizes by doing pull-ups — five for a USMC lanyard and 20 for a T-shirt.

“It really does not get any better than this, right here in our own backyard,” McEvoy said, calling the event “historic” for the township.

East Brunswick Vo-Tech Principal Jeffrey Bicsko said the landing was arranged by Lt. Kevin Zebro, the township police department’s liaison to the school. The Marines remained on the ground for about two hours.