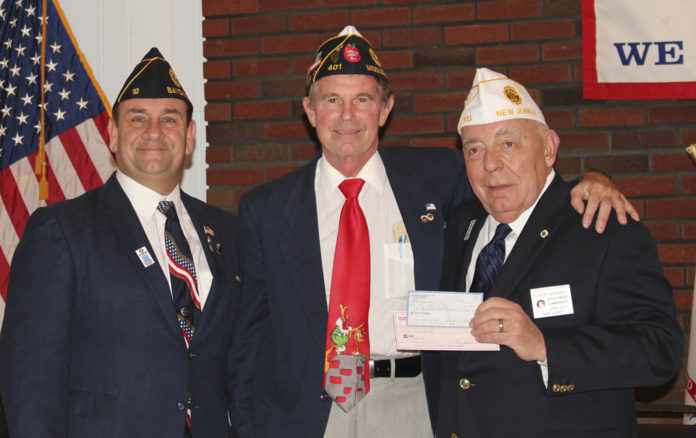 ISELIN – Iselin American Legion Post 471 played as the host to State Commander Roger Gengaro’s official visit to Middlesex County, where he explained the elements of his state project to aid homeless veterans.

During the meeting on Nov. 30, Gengaro and Jack Dunne, state project chair, accepted a $1,000 donation from Gary Cooper, Middlesex County commander, from the county organization and $100 from Post 401, South Brunswick, where Cooper is post commander.

Gengaro’s project will focus on homeless veterans by supporting a program called “Hope for Veterans” at Community Hope, a 95-bed transitional housing program located on the campus of Lyons VA Medical Center, to continue a program initiated last year to provide on-site therapy for residents with a mental health therapist, according to information provided by the American Legion.

That pilot program resulted in a significant decrease in addiction relapses and fewer hospitalizations for psychiatric issues, according to the statement. The recent funding will go toward making the program permanent.

The estimated cost of the project is $121,000. One hundred percent of every dollar donated is used for the project; none of the money is used for overhead, salaries or expenses, according to the Legion.

The Veterans Haven facilities, operated by the NJ Department of Military and Veterans Affairs, offer a haven for homeless veterans. The goal is to ensure that homeless veterans are treated and cared for so as to reach an optimal level of independence, and aid them in re-acquiring the life skills and ability to live in the community while maintaining their self-sufficiency, dignity and honor, according to the statement.

Veterans Haven North operates two distinct programs: one is a transitional housing program and the second is an emergency shelter and treatment program, known as SHIELD, a 90-180 day housing program designed to assist veterans in stabilizing healthcare and financial concerns that have contributed to homelessness, and in entering supportive or permanent housing.

The transitional housing program at both locations lasts two years, offering the veterans support and training to help in securing permanent employment and housing, according to the Legion.

Donations are tax deductible and may be sent to The American Legion, Department of New Jersey, 135 West Hanover St., Trenton 08618.

Through grant funds, Metuchen Downtown Alliance purchases thousands of meals from local restaurants for those in need