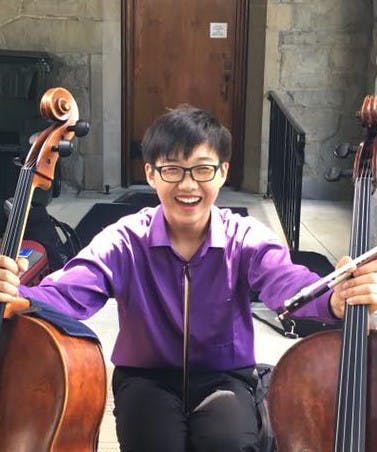 Robin Park, a 17-year-old from Princeton Junction, has been selected to join Carnegie Hall’s National Youth Ensemble for 2018.

Each summer, Carnegie Hall’s Weill Music Institute chooses young adults from around the country to form the National Youth Orchestra of the United Stated of America (NYO-USA).

Park, who was a part of the Philadelphia Youth Orchestra, was chosen along with seven of his fellow musicians to tour the world with NYO-USA.

“To me, NYO-USA was always some kind of golden apple at the top of the hill,” Park said. “Ever since I was in middle school, which was when first I witnessed the inaugural season of NYO thanks to my sister being a part of it, I would always think, ‘Wow, I wish I could be a part of that group at least once in my lifetime.’ Having seen NYO evolve and develop over the years indirectly through my sister, I now see NYO in a very intimate way. And I think it is because of this that I am all the more excited and feel very thankful that I was given the chance to be a part of NYO this year.”

Park, who was accepted into NYO-USA for playing the cello, didn’t start his musical career with his preferred instrument.

“I actually began with the piano at the age of 4. However every time I played the piano, I would cry and complain about how hard it was to reach the keys and to coordinate both hands at the same time,” he said. “So, my mom tried to get me to play the violin because my sister was rather good at it; but alas, I couldn’t even keep the violin on my shoulder, much less play it. Because of all this, my mom gave up on trying to make me into a musician for a solid three years, until I saw the cello for the first time. The cello looked like it would be the perfect instrument for me – I loved its rich tone, I loved how the cellist seemed to play it with their whole body, and, most importantly, I could play it while sitting down in a relatively comfortable position.”

When Park first began to play the cello, he didn’t see it as a chore but as a form of amusement.

“I was only interested in learning it for the fun of it,” he said. “To me, the cello was merely a toy, just a mode of entertainment. However, when I reached the age of 12, I began to get into music and ever since then – through various programs, such as camps, seminars and masterclasses – I learned the diversity and depth of the world of music; and through competitions and performance experiences, I was able to learn of the joy of playing before an audience.”

The West Windsor-Plainsboro High School North student had a long preparation for the audition process to even be considered for NYO-USA.

“The audition process was very stressful to say the least,” Park said. “I knew that trying to prepare for it close to the deadline would be a risky choice, so I began to prepare for the audition early on. I have to say that it wasn’t exactly the most fun thing because NYO’s audition requires not only recordings of my solo works, but also orchestral excerpts. Throughout my entire preparation stage, I focused mainly on my excerpts, since I had received advice from many NYO alumni that excerpts were the most important part of the audition. Nevertheless, I have to admit that the audition process allowed me to greatly improve as a musician in many aspects, such as musicality, responsibility and perseverance.”

The summer tour for NYO-USA will begin at Carnegie Hall and makes its way to New York, and then the orchestra will fly to Asia, where they will tour from China to Taiwan to South Korea.

“Having been accepted this year is also a huge stroke of luck for me because thanks to one of NYO’s tour destinations being South Korea, I will be able to finally see my extended family in Korea and show them how much I’ve grown as a person and as a musician,” Park said. “Being able to visit all of these famous Asian cities and being able to play in their most famous concert halls – in front of vast and diverse audiences – will truly be an honor and an unforgettable experience.”