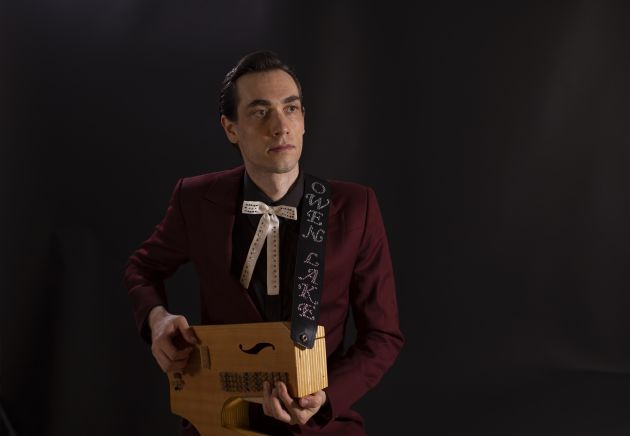 Owen Lake of "Owen Lake and the Tragic Loves" performs with a synthesizer.JEFF SNYDER
×

Owen Lake of "Owen Lake and the Tragic Loves" performs with a synthesizer.JEFF SNYDER

“The Best of Your Lies,” an album by Owen Lake and the Tragic Loves is set to release on Nov. 30.

Prior to the release of the album, Owen Lake is set to perform a release show this Saturday, Nov. 10, at the Princeton Public Library at 7 p.m.

Owen Lake is actually a pseudonym for Jeff Snyder. Owen being his middle name and Lake the street on which he grew up. “The Best of Your Lies” is Snyder’s second album coming almost a full decade after his LP release, “A Love on My Mind,” in 2009.

Growing up in Minnesota, Snyder attended college in Wisconsin, where he studied composition. Later he went on to Columbia University in New York City for graduate school.

“I started from the music side of things, but I’ve also picked up some engineering things along the way as needed,” Snyder said. “In order to get what I wanted to be able to get done in relation to music. For instance, to get what I wanted to get done, I realized that I had to learn a bunch of electrical engineering in order to be able to make things for certain kinds of purposes instead of just using things that large companies make that millions of people would want. I make a lot of DIY (do-it-yourself) electronics and programming.”

Snyder is currently the director of electronic music at Princeton University, where he has held that title since 2010. Directing what he calls a “Laptop Orchestra,” Snyder uses electronic music to create an ensemble.

Snyder has been involved with music for most of his life. He could recall making music on his Commodore 64 during his childhood in the ’80s.

“When I was a kid, I was always interested in trying to figure out how to make music electronically. I mostly used commercial tools,” he said. “It’s always been my medium. I’ve studied guitar. I’ve played guitar for a while, but I’ve never been that great. I’ve always kind of felt my main calling was electronics – ever since high school – but saying your main instrument is electronics doesn’t really paint a real picture of what that means. For me, it meant a lot of different things along the way. For the most part, I’m mostly interested in the live part of electronic music, like making music live using electronics.”

Snyder has felt making live electronic music has been always a challenge for him. Stating electronics distances us by their sound.

“Electronics, by their very nature, decouple the effort of what we put into musical sound,” he said. “You can lightly tap your finger on a space bar and have it make this huge gigantic sound that lasts for five minutes, compared to playing percussion where you have to hit it harder if you want it to sound louder. If you want things to work that way in electronics, you have to design it that way.”

And that is what Snyder has done. Now, as Owen Lake, Snyder uses “electro-country” sound to a synthesizer and vocals to bring the band their first full-length album.

“I started it back in 2008, when I was going to make an album of old country songs and make them electronically,” he said. “I wanted to make a very earnest attempt at bringing some justice to these songs with electronics. I really wanted to try a real honest take on it.”

Eventually Snyder’s cover album turned into something more when he created his alter ego of Owen Lake and created some original styles using electronics.

“I’m an electronic musician, so [originally] I felt that my medium wasn’t right to express myself in country music,” he said. “I wanted to make country music myself, so I decided to try to find a way to make electronic country music.”

“The Best of Your Lies,” which Snyder has been working on putting together since the release of his LP in 2009 soon will be released. After work and life took precedent, Snyder didn’t really have the time to put his newest album together.

“The last few years, I’ve kicked the project into a higher gear and decided to really finish the new album,” he said. “A lot of the songs are classics. They are songs that I thought should have been classics, but are relatively forgotten, but are great. I really try to take them in a direction that goes quite a bit beyond from where they started; so they’re not really covers, but more of a reinterpretation.”

Including some original songs on this album, Snyder received help writing the lyrics from his wife, Anica Mrose Rissi, who is a children’s book author.

“I’m a composer and I really don’t write words well,” he said. “But then I got married to an author. We met each other, and it turned out that she was really interested in the same country music that I was and she played fiddle. So she joined the band and has leant her skills as a lyricist.”